Home MagazineNews & Views Up, Up, Up in the Cloud
News & ViewsThrow-Away

The future of data storage is above our heads 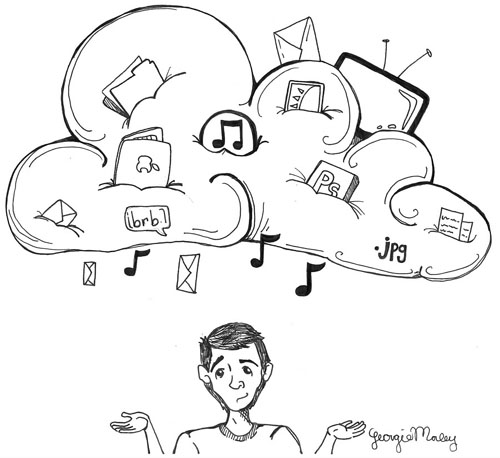 Cloud computing is taking data storage to new heights with recent advancements and improvements in information privacy and access.

Windows, Google, Amazon and Apple are participating in the movement toward Cloud computing as they and other companies establish individual versions of the Cloud. Internet and computing giants have inspired other companies to develop Cloud storage systems in order to keep up with their competition. According to a study conducted by Edge Strategies, 74 percent of business employees surveyed from 3,258 companies internationally said they expect to use at least one Cloud service in the next three years.

While the Cloud is advertised as being part of the sky, a new frontier conquered by the technical designers, the concept of the storage system is not as lofty as its title suggests. The difference between Cloud computing storage and more traditional forms of data storage is how it utilizes the Internet to store the information.

Recently, Hewitt Packard, a technology and software company joined the ranks of corporations making the switch to Cloud computing services. H.P. decided to make the switch to the Cloud in an effort to compete with Amazon, which The New York Times reported has one of the largest corporate cloud business.

Bill Veghte, the chief strategy officer and executive vice president of software at H.P. said the company decided to make the switch because they had experience with products and working with intellectual property and felt it would be a wise move to apply Cloud computing programs.

“There is a new wave of cloud and mobile computing, and big data, and there is a gap between what businesses need and what information technology is delivering,” Veghte said.

Senior Director for Cloud and Virtual Data Center Services for EMC Corporation Ted Newman said that people can access their protected information with ease because its all stored in a slice of the internet where one person has the power to control who can and cant see their information.  EMC is a computer information company that focuses on delivering and supporting virtual infrastructure.

“It’s easier to use because you can access it from any device because it only requires internet access to open files from your computer on your phone,” Newman said.

Not everyone is pleased with the Cloud computing storage system. Richard Stallman, the founder of the GNU project, a company that specializes in producing free software, warned against the security dangers of using a storage program that is under someone else’s protection.

“One reason you should not use web applications to do your computing is that you lose control. It’s just as bad as using a proprietary program. Do your own computing on your own computer with your copy of a freedom-respecting program,” Stallman said. “If you use a proprietary program or somebody else’s web server, you’re defenseless. You’re putty in the hands of whoever developed that software.”

However, the files aren’t actually floating about cyberspace. According to Newman, the files stored in the Cloud are safely protected by the regulations put in place to protect the files and the file owner’s identity. He said it was similar to the way users on Facebook can choose their privacy settings as to who they allow to see their photos and information.

“Different services come with different levels of privacy and some of those are user approval which are more flexible and others are set as a default—you know everything is available,” Newman said. “Some of the big companies don’t use them because they’re afraid they’re going to access their data or there are regulations put in place so credit card information can’t live on data that could be potentially accessed by another company or could be exposed to the public. So there are regulations put in place and companies meet those regulations, but if they don’t want to use them then individuals use them.”

However, according to Newman, “you get what you pay for” so if consumers want more security for their files than they would have to pay for just as if they wanted more storage space for the Cloud.

“In the case of the iCloud, you know the first five gigs are free but once you start going over that you have to pay for it. Whereas if you had a physical piece of hardware you would have to pay for it whether you were using it or not,” Newman said.

Companies were unwilling to publicize information detailing how they designed the security features of their Clouds. With the competitive Cloud storage system climate it’s logical that companies would prefer to keep the design secrets of their products close to the chest.

Freshman Matthew Dezii, a PPECs employee and avid Cloud user said, the Cloud is a great way to store information because he can access his files when he’s on the go. He said it was easier to keep track of his hectic schedule with the Cloud because he was able to access the calendar in his Macbook easily from his smart phone.

“Cloud computing is wonderfully convenient, it allows instant collaboration, and access to information from anywhere across the globe,” Dezii said.

TinaMarie Craven is a freshman journalism major who saves all of her information on floppy disks. Email her at tcraven1[at]ithaca[dot]edu.