Hungry as a Hipster

Are IC students’ eyes too big for our stomachs? 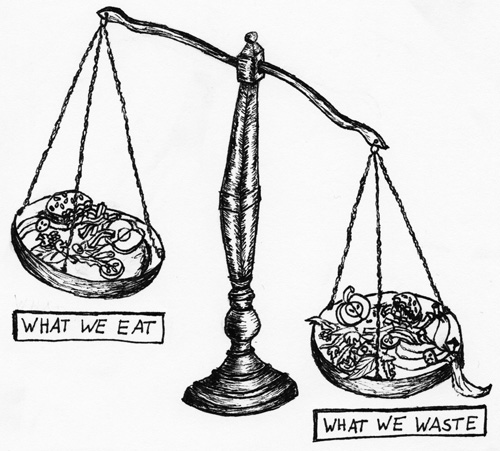 Ithaca College Dining Services composts over 3,000 pounds of food daily. With the average American eating about 4.7 pounds of food each day, the waste IC generates is enough to feed one American adult for about two years. With that known, the question remains: how much food are students taking compared to what they are actually eating?

To figure this out, the Resource and Environmental Management Program (REMP) and Sodexo have teamed up across campus to find how much food is actually wasted.

“Some people need to take responsibility for themselves, which is why we do Weigh the Waste,” said Sodexo Sustainability Coordinator Stephanie Piech.

About twice a week Sodexo, REMP and sustainability interns volunteer two-hour shifts in the dining halls weighing the waste in front of the tray return. The reason for putting the compost bins in front is to highlight the action of scraping the food off the plate into a waste bin so students can see how much food they actually did consume. “Just kind of the actual action of the taking your plate and scraping it somewhere is kind of like ‘…oh… I didn’t eat this or I didn’t eat that,’” Piech said.

Not only does Weigh the Waste bring awareness to students, but it also helps Sodexo plan meals.

“From a service standpoint to see if pasta is always being wasted in one area, then perhaps we should serve the pasta in a different way or make a different pasta,” Piech said.

Composting has always been a part of the Sodexo operation. All of Sodexo’s items are pre-and-post consumer composted, meaning the scraps from preparation to what you do not eat are collected.

Weigh the Waste has been a reoccurring event on campus in recent years and the most waste generated varies between Campus Center and Terrace Dining halls.  As one of the new methods implemented, Weigh the Waste has helped to educate the student body on food waste and composting. Organizations, such as REMP help in raising awareness through “trash cops.” Student “trash cops” stand by the garbage, compost and recycling bins to make sure people rid their waste correctly.

“One of our biggest things is trash copping in the pub and at events,” said REMP and Ithaca College Environmental Society president, Margaret Keating. As a senior environmental studies major, she has seen this to be the best educational tool because of the one-on-one interaction between eco-reps and students.

“We try to have as much information out there as possible,” Keating said. However, for composting and recycling to be a norm, it will take some time.

The college has been composting since January 1993. Originally, the first compost pile was located on campus in the Physical Plant Service Area. The original composting came from the vocalization of students advocating for composting and recycling.
“We did composting on campus because no one was doing it in the area,” Mark Darling explained, sustainability programs coordinator at IC and head of REMP. After receiving a grant from the New York State Department of Economic Development, the college built a new compost facility for the entire campus in 2000.

Then, in 2007, composting shifted to Cayuga Compost.

“It just made sense, since our core mission is education not compost, we were doing it mostly as a service, for about the same amount of money we could have someone else do it better,” Darling said.

Composting right now is not done in the residence halls because the waste generated does not have a significant percent of organic waste. Another issue is that students are just not aware of what can and cannot be composted.

“In the Gardens and Circles, we used to have composting programs, but the bins outside would just get contaminated with trash because people didn’t understand,” Keating said.

The Princeton Review graded Ithaca College with a score of 91 out of 99 for their Green College Rating, which analyzes sustainable campus efforts across the United States. The Green Report Card gave IC  a “B” for food and recycling. “We start early, as freshman to educate them how we do things here,” Darling said.

Starting education immediately provides a solution to the “lost in translation” issue Keating touched upon regarding students and composting.

“I remember visiting here for the first time as a perspective student and seeing composting everywhere. It’s just more frequent here compared to my hometown because you just have to notice it,” IC freshman Sarah Peffly said.
The latest shift in Ithaca College’s push for sustainability is the transition to single stream recycling where the choices are now between recycling and trash. Basically, all recyclable material can be placed in one bin and Tompkins County Solid Waste separates it.

“The big advantage is we can now recycle more plastics because of this system,” Darling said.

The college’s primary goal is to educate students, which in the long run will result in more compost and less trash for future years.

Stephanie Khoury is a freshman journalism major who composts because all the cool kids are doing it. Email her at skhoury1@ithaca.edu.