An Excess of Filth 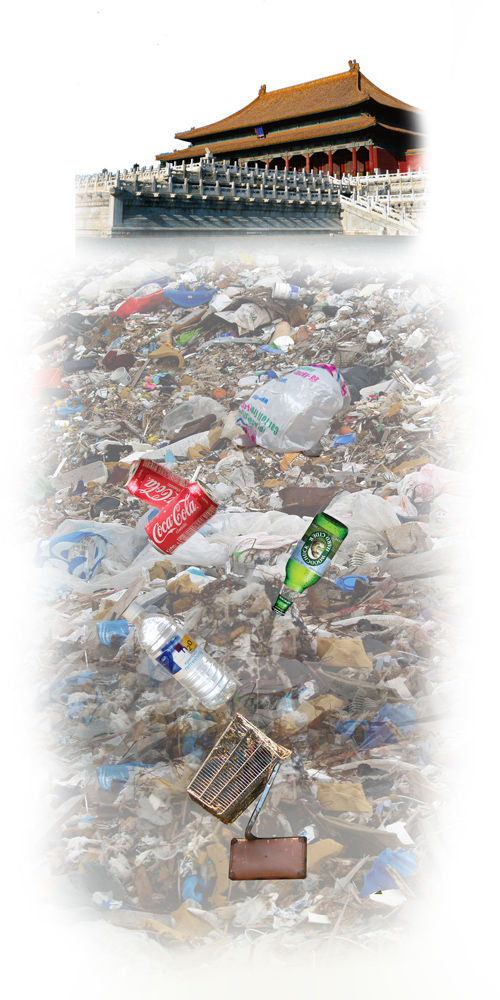 Resonating in the forefront of the audiences’ consciousness were images of filth: gaunt cows slurping around debris to drink from black pools of water, buckets of unidentified sludge poured into a gulley of goo, suffocating dust clouds and hundreds of acres of garbage.

During the Finger Lakes Environmental Film Festival panel discussion at Cinemapolis on Mar. 31, viewers expressed unanimous feelings of disgust after watching a graphic documentary about the colossal waste produced by one of China’s most progressive metropolitans. Wang Jiuliang’s documentary Beijing Besieged by Waste let the images speak for themselves as the filthy demon of consumerism physically manifested on the big screen.

“I am from China, and I had no idea that this was happening. This is shocking to me,” an audience member said.

Originating as an initial photo-documentary on Walmart, Wang’s investigations caused him to stumble upon more than 400 waste dumps in Beijing.

The 11 largest waste dumps each have 1,400 tons of waste added every day. Among the 460 discovered waste dumps, 75 percent of them were not government approved. And by 2014, Beijing’s landfills will reach maximum capacity, inevitably spreading the waste’s territory with the results of illegal dumping.

So why should people care? This issue is not in their backyard.

The film’s distributor Kevin Lee reassures the closeness of the problem. “The waste dumps, on average, are only about 15 kilometers away from the city.”

That’s about a 10-minute drive. And though the people may not see it, they eat it, drink it and breathe it everyday. Seventy percent of the waterways in China are polluted. According to The New York Times, nearly 500 million people in China lack access to safe drinking water. Ambient air pollution alone is blamed for hundreds of thousands of deaths each year.

The Chinese government is not turning a blind eye. Nov. 19, 1991 marked the start of the Beijing Environmental Project. The proposal stated, “[this] project will address pollution problems associated with air and water quality, and the disposal of domestic and industrial solid wastes.” The project was closed in 1999. The Second Beijing Environmental Project, approved on June 20, 2000, stated its objective to be “to support visible and sustained alleviation of air and water pollution in Beijing.” The project was closed in 2009. One can see on the Chinese Government Central Web Portal that these two projects do not detail information concerning the outcomes; “a result for this framework is currently unavailable.”

Is China a lost cause? Is the government so gluttonous with its own success that it’s choking on it?

In an interview with China Daily, Jiulang proposes the solution to the monumental amount of filth surrounding the city.

“When buying something, we should carefully consider if we really need it. For example, we can get something environmentally friendly, rather than something like KFC,” Jiulang said.

With an emphasis on systemic thinking, Jiulang asserts “we should think that all waste is also a product.”

Jiuliang’s film revealed pig farmers boiling the garbage from the waste plants to make feed for pigs. A portion of the swill is filtered for the oil and then sold to restaurants in Beijing. This may not be what Jiulang has in mind. The glimmering metropolis of Beijing sacrifices the health of its land and its people for the sake of expansion. China’s greatest achievement has become its biggest burden.

While living in China, television-radio professor Charles McKenzie said that the poor air quality caused continual dust corrosion in his nose. “I also had to throw out the clothes I wore from China [upon returning home], for my whites were simply no longer white.”

And by throwing away those clothes, the waste perpetuates. More garbage added to the pile, more energy used to make new clothes, more dyes and toxins dispersed into the environment.

What the textiles purge into the environment is not the only concern. During her field investigation in China for her documentary Cotton Road, Laura Kissel painted a picture of the filthy environment inside the textile factories.

“There are more environmental protections in the United States than there are in China,” Kissel said. “The air quality, for example, in the cotton gin [in Savannah, Georgia], required vent filters to keep the air circulating and clean. Factories can get away with more polluting in China than here.”

Kissel revealed her time in the textile factories caused permanent damage to her hearing.

“I was only there a handful of times, so imagine someone working in these factories day in and day out without ear plugs…When you pay $3.99 for the t-shirt, you may think it’s a bargain, but that price doesn’t reflect all of the possible harm or costs that society as a globe has to bear. Think about what the hidden costs are.”

To mail this t-shirt to China would cost about $15. The labor involved, the numerous pit stops for the cotton in Savannah to be transformed into the v-neck in Beijing somehow cost $3.99 on the Target sale rack. This shirt will have a shelf life of about three months before it’s tossed in the garbage and replaced. Cheap is cheap. So why should we care? This issue isn’t in our backyard.

Comparing the waste dumps to environmental concerns in the United States 40 years ago, Professor of Fiber Science and Apparel Design at Cornell University Tasha Lewis believes this issue is global.

“It was more of a domestic issue that people wanted solved because it was affecting their health and their quality of life,” Lewis said. “I think it becomes an international issue when pollution doesn’t stay within a border.”

China is playing a game of Jenga with its resources. Focusing on expansion and growth as a nation with a limited amount of building blocks will inevitably cause the structure to collapse.   China cannot take advantage of its land forever, but can we trust them to stop on their own? More importantly, can we afford to wait for them to figure it out?

Sulfur dioxide and nitrogen oxides spewed by China’s coal-fired power plants fall as acid rain on Seoul and Tokyo. According to the Journal of Geophysical Research, much of the particulate pollution of Los Angeles originates in China. A huge swatch of debris is reaching the shores of the United States from Tokyo’s tsunami in 2011.

You vote with your money. When you spend money, you are saying this is okay: it is okay to treat your workers this way, to treat the planet this way. Disposable t-shirts will dispose of China, and the planet will soon follow.

Amelia Reynolds is a sophomore journalism major who loves her eggrolls fried in swill oil. Email her at areynol2[at]ithaca[dot]edu.