What’s driving students away from volunteering? 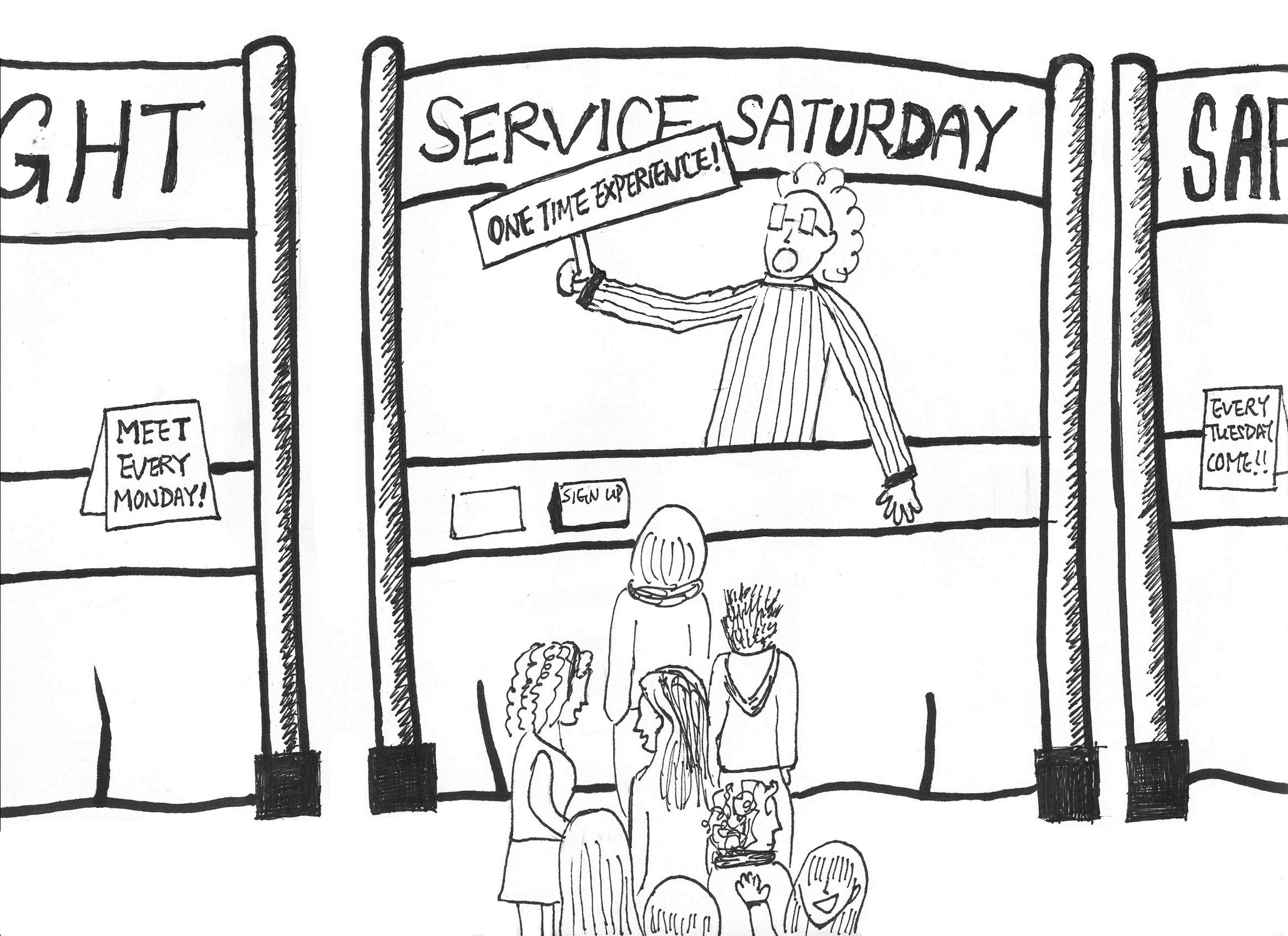 In a time when young Americans, especially college students, are being defined by their philanthropy, volunteerism and service are practically expected on job applications and resumes. Nevertheless, involvement at Ithaca College has plummeted. Service-based clubs and organizations are struggling to recruit new members and keep relationships with previous volunteers.

Are the students of Ithaca College apathetic or are other forces driving students away from volunteering?

“This organization really reaches out to everyone,” Kass said. “I don’t know a single person who hasn’t been affected by cancer.”

Daniel Wald, 2009 Ithaca alum and co-founder of Students Active for Ending Rape (SAFER), previously Men Against Rape Society (MARS), said that while a personal connection to the cause can initially get people to join, the number of volunteers fail to grow each year because rape is such a taboo topic. Wald said the club started with 10-20 members. However, the number of consistent volunteers has since dropped.

Even with cancer being more publicized, participation levels have plateaued in CAC. Kass said that CAC probably has about 40 real members working throughout the year, but the number dips and rises.

Kass said a reason CAC may be experiencing a flat rate of volunteers is the organizational framework of service-based clubs, which can form hierarchy with the executive board.

Ithaca College’s Food for Thought founder and president, junior Elizabeth Stoltz, said she is redoing the club’s structure to encourage more participation from general members after experiencing a decline in student involvement last year. Stoltz said IC Food for Thought generally has 20 members and can vary on consistency from there. Stoltz hopes to shift power from the executive board by allowing general members to make presentations.

“We really want to keep general members feeling like they have an important role in the club,” Stoltz said.

More than how the executive board operates, what may affect student involvement is who is operating it. Wald said that SAFER might have experienced a decline in volunteers because a shift from a male to female co-president in 2009.

“If a woman stands up and says rape is a men’s issue, guys may think she is just complaining,” Wald said. “But if I stand up and say this, they feel less attacked.”

Kass said that students new to CAC, especially freshmen, might feel intimidated by an executive board dominated by upperclassmen.

“A lot of seniors make up our executive board this year,” Kass said. “We haven’t been able to captivate a younger audience lately because they aren’t able to weed themselves into the club’s structure.”

The busy lifestyle of college students is another reason why volunteerism may be down at the college. Students will often prioritize schoolwork and socializing — leaving volunteering at the wayside.

Freshman Natalie Lang said she decided to stop volunteering for Puppy Love, a service-based organization that helps animals in need, in order to focus on schoolwork and lacrosse this semester.

The availability of an individual not only affects their decision to get involved, but also the extent to which they devote themselves.

Don Austin, assistant director of community service for the Office of Student Engagement and Multicultural Affairs at the college, said that the low student participation rate in service-based organizations on campus parallels a decline in the amount of time that students volunteer.

“A major problem with student involvement is consistency,” Austin said.  “They want one-time opportunities, but they don’t want to do it on a weekly or monthly basis.”

Another way to get students involved is to erase the stigma of volunteering as a chore. If clubs and organizations were to follow in the footsteps of Service Saturdays, which Austin describes as a blend of service and recreation, students may perceive volunteering as a social outlet and will not only continue to come back, but will bring their friends.

“People usually look at volunteering as a resume filler or their civil duty,” Austin said. “Once volunteering becomes more of a social thing, something for people to do on Saturdays with their friends, it will take off.”

Marissa Framarini is a freshman journalism major who barely had time to write this article because of all her campus involvement. E-mail her at mframar1[at]ithaca[dot]edu.