Why SlutWalk is about more than just taking back the word 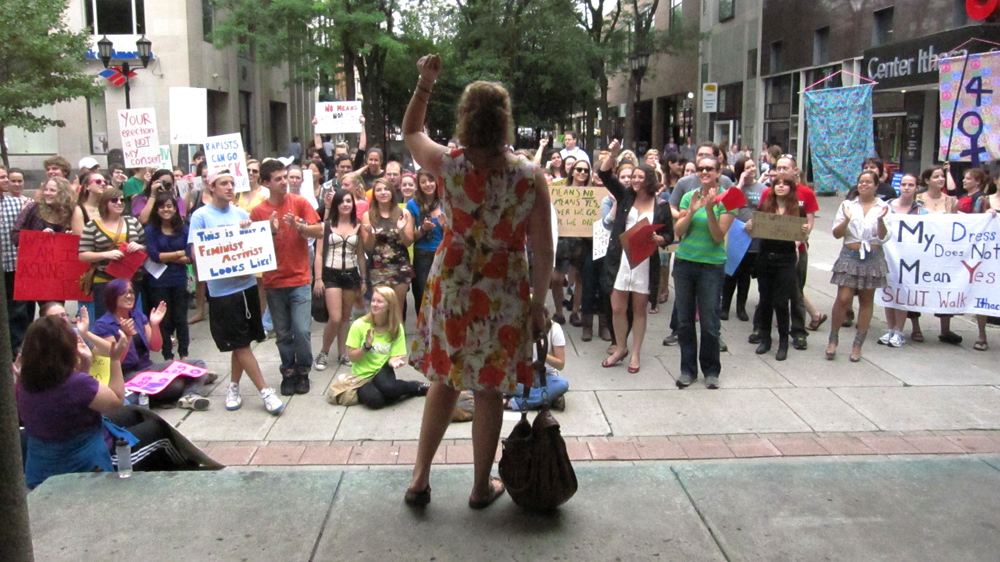 On the afternoon of Saturday, Sept. 24, nearly one hundred women marched across W. Seneca St. in Ithaca, N.Y. Their faces were filled with anger as they recalled a wealth of personal memories that have moved them to action. Their homemade signs communicated their motivations for marching: “Consent is Sexy,” “Don’t Blame a Victim, Change the System.” Together in unison, they chanted, creating a wall of sound: “We want sex! Not assault! We want sex! Not assault!”

The women were marching as a part of SlutWalk Ithaca, a protest against rape, victim-blaming and slut-shaming. The crowd of participants, which also included several men, gathered at Washington Park and marched to the center of the Commons.

For Emily Stoner, a 2011 Ithaca College graduate, the event was the culmination of five months of planning and organizing. A few months before graduating, Stoner learned about a growing movement called SlutWalk, a cultural protest that began in January 2011 in Toronto when a police officer said that “women should avoid dressing like sluts in order not to be victimized.”

Like many feminists, Stoner was initially offended by the “SlutWalk” moniker.

“I was so turned off, honestly,” she explained. “I thought, ‘What’s a SlutWalk? That doesn’t sound like something I’d like to be a part of. All of the criticisms that other feminists have had went through my head.”

But as she read about the intentional irony behind the name and more about the movement, which insists that women should not be relegated to “slut” status for open expressions of their sexuality, she became a follower. Simultaneously, she became a leader, the driving force behind coordinating a SlutWalk here in Ithaca.

Across the country, it’s not uncommon to see feminist resistance to the SlutWalk movement’s assertion that reclaiming the word “slut” is an important mission.

Stoner experienced this resistance firsthand when the Advocacy Center and Planned Parenthood in Ithaca decided not to support SlutWalk Ithaca.

“I understand how the word ‘slut’ is so hurtful to some people – especially survivors of sexual assault and violence,” Stoner said. “I understand that they may not want to be a part of something like this, even if this event is protesting that.”

Despite this, Stoner does not regret going along with the SlutWalk “brand.”

“It’s called SlutWalk because it’s an established movement. I didn’t start it, I didn’t name it, and the only way I can be a part of that movement is by calling this SlutWalk,” she said.

At SlutWalk Ithaca, dozens of women spoke about their experiences and shared their thoughts, bringing deeper meanings to the march — meanings that reached beyond the idea that “slut” language must be reclaimed.

Some women saw the march as a chance to share their own stories of sexual assault in front of an understanding and supportive crowd. Others saw it as an opportunity to open up the conversation about the fuzzy issue of sexual consent.

Sierra Shorey, a senior at Ithaca College and the treasurer of SAFER, or Students Active For Ending Rape, participated, in part, because of her commitment to reducing our culture’s stigma of sexual violence. She does so by sharing her own story of sexual violence with her peers.

Shorey’s speech at SlutWalk was direct and powerful: “When I was 17, I was raped and drugged. And when I came home, my mother told me that I deserved what I got because I was dressed like a slut. That is not acceptable. We cannot allow this kind of talk to affect the people who have been horrified and terrified by this crime.”

Later, Shorey reflected on what she gains from participating in marches like SlutWalk. “I like to speak to show that I’m not taking what happened to me laying down,” she explained. “I’m trying to use it to provoke some amount of change.”

For some women, like Solana Claudio-Albarran, speaking was an essential part of the recovery process. Claudio-Albarran, a senior at Cornell University, was raped by her 18-year-old boyfriend when she was 14. After years of subconsciously refusing to deal with her experience, she has, in the past year, really begun to cope. She led the entire contingent of Cornell marchers, including members from the Women’s Resource Center, in the SlutWalk.

“That was my first time ever sharing my story at a march with that many people,” she said, calling the experience “therapeutic.” “It’s one of those things, I think, that you never really get over, but you can kind of work through the emotions that are attached.”

From listening to the dozens of testimonials from Ithaca’s event, it became clear that for many, SlutWalk is not about reclaiming the word “slut.” Claudio-Albarran, for instance, finds it more important for women to “reclaim” their bodies — to assert that they are not property and to declare that they are allowed to experience pleasure.

“Even though my experience was bad, I feel like there’s some good that can come out of it,” Claudio-Albarran explained. “Participating in things like SlutWalk is a part of that. I think that by working through those feelings and understanding them fully — not accepting what happened, but more coming to terms with the fact that it happened, that it still affects me, but that I’m still here — I can still move forward.”

Adam Polaski is a senior journalism major who knows that “no” means no. Email him at apolask1[at]ithaca.edu.