An Ithaca Family Cooks Up Some Love

Inside DeWitt Mall, next to the Bookery and across from Past Times, sits Dino’s Mediterranean Deli — a family-owned and  -operated business recently opened in August 2008. Dino’s is like many other places in Ithaca in that it’s a small family business. But Dino’s isn’t working toward keeping a tradition or recipes in the family. Dino Tsipouroglou, the 54-year-old owner of the restaurant, didn’t plan it this way.

Family-owned businesses face challenges unique in the business world: succession, marriage and divorce, relationship issues and conceptualizing a vision as a family. According to the Family Firm Institute, a research group in Boston, less than three percent of all family businesses survive past the third generation. Those that manage to endure give credit to providing essential products or services, adapting offerings over time and forging strong succession plans and strategies for family members to work together, detailed a BusinessWeek article. 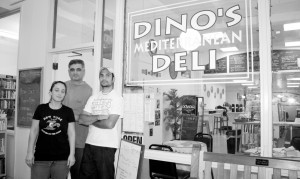 With its large storefront window that has blue painted letters of the restaurant name, the restaurant space looks modest and simple. The spices in the background and the smell of Mediterranean food being prepared give Dino’s an air of ethnic roots transplanted from someplace overseas.

Dino Tsipouroglou’s two “employees” are his son Michael, 27, and his niece Alexis Abb, 23.

Dino didn’t have a big plan of traditions and recipes, or even of eventual succession. He says his restaurant is family-owned out of necessity.

“The economy being as it was [when I opened the restaurant], my family was willing to help,” he says. “My son came in, and I have a niece who’s helping. They basically don’t get paid. They live off tips. I wouldn’t be able to do that without family.”

Being a family-owned business has continued to be a sort of recession buffer.

“Had I had to have just one employee that I had to pay,” Dino says, “I probably would’ve been closed by now.”

A first generation Greek from southern Connecticut, Dino first arrived in Ithaca 25 years ago following his wife and his son after he was temporarily separated from them because of family issues.

He worked at Wegman’s for four years, but had been thinking about food as a business for some time before that and began the process of planning to open a restaurant two or three years ago. Michael says they prayed for God to open up the perfect place for their restaurant. The family had been looking at a few places around Ithaca before settling on the current location in DeWitt Mall: the rent was cheaper, the space was better and they were able to get financial help from the Small Business Association.

While Michael works at the restaurant nearly every day, he hasn’t exactly seen his future plans map out with the opening of his father’s business.

“I came [because] I could see myself doing nothing else than helping my dad,” Michael says. “I didn’t know how long I was going to be here.” He had hoped the business would be successful right away because his plans were to attend a Bible institute. But he says he’s happy helping out the family for now. Alexis, Dino’s niece by marriage,  has other plans, too. She expects to be working in the business for about another year until she goes back to finish her last year of college.

“At first I didn’t see myself really pursuing this,” says Michael. “I know my dad probably has dreams of leaving this small beginning aside and moving on to do maybe even a full-scale restaurant. And I’m sure there are plans of me taking this over if it were successful. [But] I don’t know. [Food] isn’t really my art, that’s not really where I find my joy, but I can see myself doing it at the same time.”
For now, Dino is happy to have his family around, too. “[Working with family means] you have people here that you trust,” he says. He says it gives him peace knowing he has family who can help him, and he doesn’t have to worry about robbing or other things that come along with owning a business.

Alexis says working with family was unexpected, but a great experience.
“[Working here] wasn’t forced on me…It’s really cool to have the same customers come in each day.” Michael and her do crossword puzzles when it’s not busy and talk. She’s been able to develop a closer relationship to her uncle and cousin, and there hasn’t been drama because it’s family, but also, “because it’s two guys,” she says laughing.

“[The restaurant has] actually brought my son and I closer and my niece closer,” says Dino. “At times we can get on each other’s nerves, but…I have not put the business in front of family. Family’s first. Then after that comes the business. I don’t see them as employees. I see them as family.”

Alexis comes from a big Italian family. She recalls that her grandfather, Dino’s father-in-law, and her uncle loved to cook. And when her grandfather died in 2004, Dino kept cooking until it became a real passion.

Michael says the business with his father was something he had to adjust to. “At first, [working with family] was rough. It’s hard because me and my dad never really interacted like this before, so close, so things had to be ironed out, just through talking.

“My dad and I didn’t really have a great relationship growing up,” Michael says, naming separation and alcoholism as two factors that kept him and his father at a distance. “We had a transformation. And through this [restaurant], we’ve learned to communicate. It was real, it was open. We got to talk about deeper things than just, you know, sports. We’ve talked a lot about our dreams and passions, what we want to see happen. Letting go of the traditional dreams of being successful. We’re learning the process now in this business and we’re doing it together now.”

As far as things are concerned now, Dino, Alexis and Michael still plan to work together, and they’re enjoying the time they spend with both customers and with each other. They truly seem to love the idea that their place gives something back to its customers.

“[It gives] a sense of coming into our house, a comfort level,” says Dino. “I want people to like what we have. I want them to enjoy the food and come back because they enjoy the atmosphere. And we’re happy to be here.”