Troy Davis: The Next Tom Robinson

In the flurry of the Alabama courtroom, a thick blanket of humidity clung to the sticky wooden pews as occupants waited for the jury’s verdict.

The defendant, Tom Robinson, represented by lawyer Atticus Finch, was a black field-hand accused of raping 19-year-old Mayella Ewell. Hours later, Robinson was convicted of the crime, despite clear evidence that proved his innocence.

Although Tom Robinson is a fictional character in Harper Lee’s Pulitzer Prize-winning novel To Kill A Mockingbird, the book’s trial was based on a real trial about racial disparities from the author’s childhood.

Fifty-eight years later, among the muggy August summers of Georgia, another black man was convicted of a crime. Nineteen-year-old Troy Davis was sentenced to death in 1991 for the 1989 murder of Georgia police officer Mark MacPhail despite a lack of physical evidence. Recent testimonies from witnesses may even suggest Davis’s innocence. The fact that Davis was sentenced without sufficient evidence suggests that the racism of which Harper Lee wrote still plagues the United States. 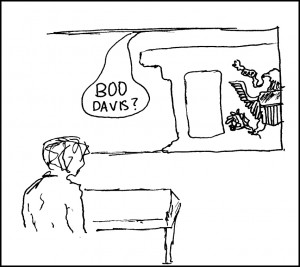 Late at night on Aug. 19, 1989, in a Burger King parking lot in Savannah, Ga., Security Guard Officer Mark MacPhail heard a homeless man crying for help and went to investigate. When doing so, he was shot with a .38 caliber gun. A few days later, wanted posters for Troy Davis, “cop-killer,” were posted all across Georgia. Davis, for obvious reasons, fled.

However, there are minor discrepancies with this alleged crime.
“If I knew then what I knew now, Troy Davis would not be on death row,” Brenda Forrest, one of the jurors at the trial, told a CNN reporter. “The verdict would be ‘not guilty.’”

Even so, Davis was denied a retrial until recently. Several witnesses in the original trial testified that they saw Davis pull the trigger on Officer MacPhail. One of the witnesses was Sylvester “Red” Coles, another black man who admitted to harassing a homeless person the same night Officer MacPhail was killed. It was Coles who originally delivered Davis’ name to the police officers. After Davis was convicted, seven out of the nine witnesses later signed affidavits to change their original testimonies or claimed that the police pressured them into testifying against Davis.
“I told them over and over that I didn’t see this happen,” witness Darrell Collins said about the police. “They put what they wanted to put in that statement.”
Even though no physical evidence for the crime was ever found, some people still believe that Davis is guilty of the murder.

Like the victim’s family, the Davis family is suffering from their loss. Davis’ family founded the website troyanthonydavis.org to gain public support for the case.
Since then, Amnesty International, former U.S. President Jimmy Carter, Archbishop Desmond Tutu, and U.S. politicians Bob Barr, Carol Moseley Braun and John Lewis have all supported a retrial for Davis.

On the Web site, Davis’ sister Martina Correia said: “How do you celebrate holidays when everybody’s being happy and your family member is in death row? How do you go on? We’re stuck in this thing where we’re tormented and tortured all the time. … I know by which means they are going to kill my brother, I know the date and the time and it’s a terrible thing because he’s innocent. Just because of the color of his skin and the fact that we didn’t have a lot of money, it’s like, so what?”

So what? While racial minorities make up 11.4 percent of the total U.S. population, the Sourcebook of Criminal Justice Statistics 1990 cited that 47.01 percent of national incarnations were of blacks. It is distressing that even with the forward motion of the Civil Rights’ Movement between the early 1930s and the year 2009, not much has changed. The issue of race still exists.

“It sucks when you are being persecuted because of your race,” Aryelle Cormier, an IC freshman and Georgia native, said. “You can’t take off the color of your skin. You feel helpless. I think they all need all the support they can get.”

Of course, no amount of money or support will bring back the dead or erase the happenings of history, and while neither Tom Robinson nor Officer MacPhail can be reunited with their families, Troy Davis may still have a chance. The U.S. Supreme Court ordered a federal trial court in Georgia to reconsider the case on Aug. 17, 2009, meaning that Davis might get another chance to be found not guilty.
“I don’t want to see this innocent man get killed for something he didn’t even do,” Tanya Johnson, a witness at the original trial, said.

“It’s up to us to stop this stigma among minorities,” Cormier said.