I don’t know about you, but I’m fascinated by other peoples’ sex lives. And the theme of this issue of Buzzsaw is Tape. So, why not talk about the sexiest, most unique tape there is: bondage tape!

Maybe you didn’t know that there is tape made specifically for bondage purposes. Maybe you don’t know anything about bondage! Both are fine. We are all just trying to learn.

Bondage tape is made from 2-inch wide PVC that only sticks to itself and not to hair and skin. It comes in a wide variety of colors and, like duct tape, can be used for a million and one uses like:

General limb tying: the most famous form of bondage where you or your partner can restrain you by tying your limbs together, a bedpost or to whatever you need to anchor yourself!

Mummification: a specific type of bondage that involves wrapping part—if not all—of your body up, not unlike a mummy.

Pony play and other specialized forms of BDSM/kinks: Google it if you have other questions.

Gage widener: a non-sexual, but still useful way of stretching the holes in your ears out for larger gages.

Bondage tape cannot be used for:

In a perfect world, I would have bought bondage tape and tried it out so that I could give you first-hand experience, but sadly that isn’t the case.

I took the time to separately sit down virtually with two friends of mine who have used tape in their bondage practices and they answered some of my?and I’m assuming?your burning questions for them.

They both wanted to remain anonymous, so let me introduce you to my two friends:

Darren- A real cool Dom-guy who has light experience in bondage that is relatively limited to household objects.

What is your preferred method of bondage?

Darren: Neckties, belts, scarves. Things you can find around the house.

Brooke: Leather cuffs or collars are my favorite kind of bondage restraint. If I do restrain, I tend to use zip ties or collars/harnesses.

What has your experience been like using tape in bondage?

Darren: It was one of the first things [my partner and I] ever bought because we were finally old enough to purchase it. I liked it mainly because it was inconspicuous in my room because at the time, I was still living with my parents and in high school, so you can imagine what that was like and having something like a roll of tape, compared to a ball gag, was an ideal scenario.

Are there any advantages to using bondage tape? 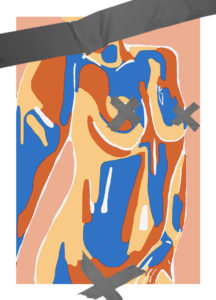 Darren: Definitely like I said, the inconspicuous-ness. But also it felt safer to use than tying knots when we didn’t really know what we were doing. This felt more controlled and like we couldn’t fuck it up.

Are there any disadvantages?

Darren: It personally doesn’t do it for me as much. I really like using a necktie because that’s like a hot power move—wouldn’t advise against it though, it just wouldn’t be my go-to.

Brooke: Waste is a big one, but also comfort possibly? It’s not really a restraint used for comfort, it’s used for the aesthetic above all and the symbolism that tape has in our culture when restraining a person.

Would you recommend using bondage tape?

Darren: I would say use what you have to start and then figure out what you like and if bondage tape seems like a good move for you, then do it. It was definitely a good first sex-shop purchase for a couple of eighteen–year–olds.