Home IssuesCoffee RAW FROM THE SAW – Show Review: Everything Sucks!
CoffeeMinistry of Cool

RAW FROM THE SAW – Show Review: Everything Sucks! 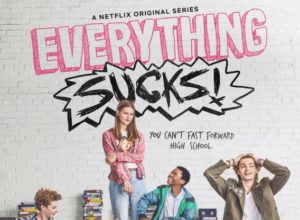 It seems that decades of the past have become a new aesthetic trend in film and television. We can arguably trace this back to the massive success of Stranger Things, but shows like The Goldbergs technically did it first. Regardless, our newest addition to the aesthetics of the past includes Netflix’s new original dramedy Everything Sucks! While Netflix has revolutionized the decades aesthetics choice with Stranger Things, this new show centering around a high school in Oregon in the nineties is unfortunately not as strong as its older spiritual brother. It has its moments, but I don’t think anyone’s going to remember the choice to utilize the nineties as a big necessity to the show’s storytelling. Everything Sucks! doesn’t suck , but it’s not that great either.

We focus mostly on two underclassman – freshman Luke (Jahi Di’Allo) and the girl he has a crush on, sophomore Kate (Peyton Kennedy). What could’ve been a typical set-up for a cheesy highschool romance diverges in its realism with the way it follows these two diverse leads. First off, they look like ACTUAL high school underclassmen and not attractive, chiseled 20 year olds posing as early bloomers. Luke is a young black aspiring filmmaker in a single-parent household. He’s independent and outgoing, and while at first glance we’re given the impression that he and his two dorky friends Tyler and McQuaid would be the kids to get beat up in this high school, Luke’s easygoing and driven nature keeps him from being a social outcast. Five episodes in, Luke becomes well-respected among his peers.

Kate, on the other hand, is more of an outcast and loner by choice. She struggles socially because her father (Patch Darragh) is the school’s principal and people distance themselves from her. She values the distance, because she hides her blossoming homosexuality with a faint interest in A/V Club where our two young stars meet. While Kate’s own personal storyline about her coming into her sexuality is more interesting than Luke’s student film, their friendship is truly special and is a definite shining point of the show.

The show also loosely follows the characters around them: Kate and Luke’s parents who eventually meet and start seeing each other, the Drama Club members that act in Luke’s film, and Luke’s own dorky friends who strive to find confidence on their own. This is unfortunately where the show starts to falter, as most of the plotlines often fall to the wayside when Luke and Kate’s stories are so engaging. The other plotlines are especially rushed in comparison – which is detrimental to Ken (Kate’s father) and Sherri (Luke’s mother) eventual courtship. We get the sweet beginnings of it, and then suddenly we’re in the middle of it. The show takes a huge leap in order to give more time to Luke’s journey to learn more about his father who left him and his mother when he was too young to understand.

This show also fails to deliver any distinct laughs and is rarely actually funny. I can count on both hands the number of times I laughed while watching the entire season, and even then my amusement never surpassed a short chuckle. The show leaves a lot of the comedy to Luke’s friends and the Drama Club members, but they’re more annoying than they are funny.
The show also fails to ever really justify its 1990’s setting. It adds nothing of real substance to the show or its telling of the story. While Stranger Things was set in the 80’s and felt like a movie from the 80’s, Everything Sucks! could’ve really been told in any modern decade. There is nothing about it that justifies the 90’s setting, besides just a visual aesthetic. It looks at the nineties with rose colored glasses, as a simple time divided between Blockbuster Video and Alanis Morrisette. In this way, I guess the show’s portrayal of the nineties and the show itself are similar. Everything Sucks! is a sweet show that focuses on the past, handles its two leads with great care, and carries promise of potential and improvement for later seasons. As for what it is presently, it’s not half bad, but not quite special eith