RAW FROM THE SAW – Film Reivew: A Quiet Place 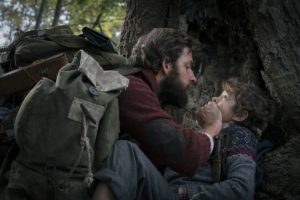 “If they hear you, they hunt you,” is the description for the movie A Quiet Place, and I would think it’s safe to say that most people will not have the problem of someone talking in the theater during this film.

A Quiet Place takes place in the year 2020 where almost the entire population of humans has been wiped out due to an attack from blind creatures with a high-sensitivity to sound. The film follows the story of one family: wife and husband, Evelyn Abbott (Emily Blunt) and Lee Abbott (John Krasinski), and their three children, Regan (Millicent Simmonds), Marcus (Noah Jupe), and Beau (Cade Woodward). The reason the Abbott family has survived for so long is because instead of speaking, they use American Sign Language to communicate, as Regan is deaf and uses a cochlear implant. Throughout this film, two questions are raised for the Abbott family: how do they protect each other and what is the creatures’ weakness?

I took a cinema production class my freshman year of college in which my professor told us, “There is no such thing as a silent film.” However, A Quiet Place challenges everything we know about sound. The film varies with the sound, or lack thereof throughout the film, in order to show the different perspectives of the characters and action in that scene. Many times, Simmonds character would be the single focus point in a shot and there would be no sound, forcing the audience to question if the sound system was broken or their hearing was off. Then, on the flip side, in the moments where the blind creatures attacked or when Krasinski’s and Jupe’s characters were by the river, the sound levels almost seemed too high because the preceding and following noises were so contrasting; the viewers could even consider this contrast jarring. But I liked this element because it kept me on the edge of my seat. I wasn’t scared, but I was rooting for the family to win at the end.

A Quiet Place is one of the few films I didn’t need to have closed captioning glasses, a fact that I appreciated. As a person who is Hard-of-Hearing and knows American Sign Language, I was excited that the director chose to hire a Deaf actor and use ASL, not as a necessity but as a fact of life before the apocalypse began. My major problem with this film, though, is that the framing of shots prevented me from seeing the signs. Instead of shooting waist up, as one should to get the signs, the shots were shoulders and up.

Another question I have for the film is the use of Simmonds’ character’s cochlear implant as the symbol and reason for the future survival of the human race. These blind and sound sensitive creatures hate technological feedback at high frequencies–as anyone who wears a hearing aid or cochlear implant would and does. There are still many debates within the Deaf community over cochlear implantation, a controversy even briefly portrayed in the movie. So the fact that the cochlear implant is what distracts the creatures enough to kill them makes me question the stance the director has on cochlear implants.

After watching the movie, I have came to one conclusion: if we were to come to an attack with sound sensitive creature, I know I would want to align myself with the Abbott family.