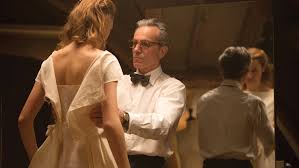 Phantom Thread marks eleven years since Daniel Day Lewis and Paul Thomas Anderson collaborated on the intoxicating There Will Be Blood. The two are one of film’s most beloved duos: the icing to PTA’s exquisitely constructed cakes. That is until Vickey Krieps steals the stage.

Reynolds Woodcock (Daniel Day Lewis), a middle aged British couturier, takes artistry to its extremes. A perfectionist at heart, Reynolds knows what he wants and expects it to be his; whether that be fashion, women or power.

One weekend, he drives his sporty maroon roadster — at top speed, of course — out to his country getaway, arriving at dawn, and orders breakfast in the restaurant of a seaside hotel. He takes sight of this waitress, Alma (Vicky Krieps), and transforms her from an immigrant waitress to be a couture model and muse, crafting a relationship neither could have expected.

The script dives into the psyches of both Alma and Reynolds, and invites the audience to see the pair as two sides of the same coin. Alma strives to prove she’s not just a mannequin for Reynolds to dress and prop up in front of his colleagues. She finds her autonomy in the haute-couture fashion world, challenges her partner’s chauvinism with sharp wit and shows that she’s more of a kindred soul to Reynolds than either realized. Reynolds feels alienated by his drive and hides himself inside his own genius, something Alma learns along the way in their bizzare time together. As the two circle one another in testing the boundaries of their relationship, this slow, beautiful burn of a film raises the question: what do you do when each partner wants to outshine the other?

The romance masterfully bounces back and forth between a 1950s screwball comedy and a psychological thriller, from Alma and Reynolds throwing one-liners at each other to an intense analysis of what it means to walk the line between the good and the bad that comes with creative passion. Phantom Thread is not the romance we necessarily want, but the romance PTA knows we need to see.

PTA also makes his cinematography debut on the film, but refuses a credit. The subdued, yet lush and tailored textures are a thrill to see but will ultimately go unnoticed by the awards season (a majorly upsetting truth). From Jonny Greenwood’s eerie, delicious score, to the unmatched costume design, to the infectious performances from Day-Lewis and Krieps (Krieps especially), Phantom Thread deserves to be on your radar.