RAW FROM THE SAW – Film Review: Call Me By Your Name 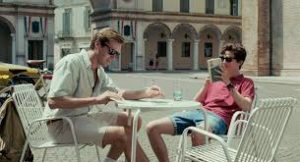 Call Me By Your Name is, without a doubt, one of the best films of 2017. It feels brazen to start a review for a film like that, but I think this time for this one film it’s totally warranted. Director Luca Guadagnino wants you to be swept off into this beautiful world of summer passions, first loves, playful trips to the beach, and days just spent reading a book and laying in the warm sun. Despite what it might appear to be from trailers, posters and advertisements, it’s not just a film about love — it’s a love letter to summer, innocence, tender moments with family and friends, and about the sadness that penetrates through beautiful times. There’s no other way to say it — Call Me By Your Name is a breathtaking painting in motion and beautiful poetry spoken aloud.

It begins with seventeen-year-old Elio (Timotheé Chalamet) mostly trying to keep himself entertained at his parents summer home in Northern Italy. His father, an archaeology professor, brings grad student Oliver (Armie Hammer) to study under his wing and stay with them for a few weeks. Elio and Oliver’s relationship begins with Elio’s annoyance of having to give up his room to Oliver, but over time they develop a sweet friendship that leads to something more.

As far as the plot goes, there isn’t much here — but I don’t think the film would be quite the same if there was one. This is more a character study of Elio, whose summer becomes unforgettable with Oliver’s arrival. It’s more about their relationship, and the ups and downs of it as the summer goes on. The film feels weightless at times, but I was never taken out of it and not once bored during it. The cinematography and the production design keep the film from being a basic love story. This film often times feels like a love letter to Italy — its beautiful scenery and sweeping landscapes are a great background to see the actors, Hammer and Chalamet, act in front of.

Hammer and Chalamet do fantastic work here, especially Chalamet. His Elio is playful, shy, and tentative all at once. There’s a cocky teenaged spirit behind his performance, but also a reserved nature that keeps him engaging and likeable. Hammer’s great as well. There is a sort of typical all American boy-ness behind him. Oliver oftentimes feels like a friend everyone has — one everyone likes but not necessarily understands, and watching Elio break through to him is interesting to see. But Chalamet and Hammer’s character development benefits from having a top-notch script to work from. The dialogue is so natural and beautifully written. Towards the end of the film, Elio has a conversation with his father that honestly took my breath away.

I’d be remiss if I didn’t mention the absolutely beautiful soundtrack. I’ve listened to it about three times since I’ve seen the film. It’s so well put together, and the piano pieces are ethereal and go nicely with some of the pop songs also featured. Sufjan Stevens’ Oscar nominated “Mystery of Love” is also fantastic — everything about the soundtrack reminds me of the film. It so seamlessly plays over the film and only enhances the emotion of the scenes.

Call Me By Your Name is the most delicately crafted movie I’ve seen in such a long time; at times it feels like a dream. Guadagnino carries the audience away with his wonderful film of new experiences, close friendships, and first loves. Go see this movie and feel a well spent nostalgia of summertime.