RAW FROM THE SAW – TV Review: You’re The Worst 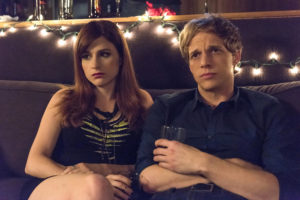 “Jimmy, I’m scared of this shit, ya know? I don’t like it.” Gretchen says by the poolside, staring out over the city of Los Angeles. “I don’t believe in it anymore, so…” Jimmy replies after a second, looking out at the city from his beautiful house on a hill. “So, if we both know that it can’t work, then there’s no harm, right?” Gretchen proposes. Jimmy agrees. This is how the tumultuous love story of FX’s You’re the Worst begins,: with an agreement that Jimmy and Gretchen’s future relationship is doomed to fail. This is what makes You’re the Worst one of the best comedies on TV and one of the best rom-com television series of all time.

You’re the Worst comes after hit rom-coms like How I Met Your Mother and Friends, and knows and understands what made these shows so successful for a large audience. Themes of fate, “will-they-won’t-they” couples and the constant message that if you change who you are, you can find the happily-ever-after romance these shows live off of make rom-coms appealing to a wide audience of hopeless romantics. But You’re the Worst understands how impractical and unrealistic all of that is, and from the get-go we can see how show creator Stephen Falk tries to subvert genre cliches.

For one, the main cast is comprised of awful, narcissistic, emotionally unavailable characters that are so easy to watch. There’s Jimmy (Chris Geere), a stuck-up and entitled 30-something novelist who, at the start of the show, has published one commercially unsuccessful novel that he never ceases to tell people about. He instantly finds a connection with Gretchen (Aya Cash), a messy and cynical PR agent with a tendency to do whatever she wants without caring about how it will affect others. Jimmy and Gretchen are awful: they take Chinese food to the movies and talk loudly over the film; yet when someone tries to shush them, they yell at them about how rude that was. A lot of the show’s humor and drama stems from their awful and self-destructive behaviors; you’d never like to hang out with these two, but they often put each other in situations that make them sympathetic and thus watchable. Much of this comes from the excellent performances of Geere and Cash, who have a great chemistry and rapport on screen.

Alongside them are their friends, Edgar, Jimmy’s veteran roommate, and the unhappily married housewife Lindsay, Gretchen’s best friend. Edgar often is the straight man of the group. He’s a sweetheart who cares a lot about his friends, even when the despondent Jimmy berates him. Edgar suffers from PTSD due to his combat experience, and a lot of his story in the first few seasons revolves around his efforts to overcome his mental health problems, as well as find his own personal independence and happiness. Lindsay is a sarcastic dimwitted disaster. She’s married to Paul, a sweet but ultimately boring man, and she feels trapped in her marriage. She married young because that was what she thought she wanted, a clear jab at that happily-ever-after love story that we often see in rom-coms. She tries to make her marriage work because she doesn’t know what she’d do if she were on her own and societal pressures have told her she should. After all, marriage is every woman’s ultimate life goal, right?

Falk and his writers know and understand these characters, and they continuously push them to their breaking point to see what will happen. These characters are so compellingly messy you almost want to see them reach the tipping point just to see if they’ll improve. Sometimes they do and sometimes they don’t. They fall back onto their bad habits because change isn’t easy for them, yet it’s something they need to be ultimately happier. Falk often explores this paradox of desires with one-off episodes. They’re all excellent, but Edgar’s “Twenty-Two” and Gretchen’s “Not a Great Bet” are noteworthy. Desmin Borges and Aya Cash respectively understand and explore their characters’ mental illnesses in amazing and captivating ways.

Stephen Falk crafted a show that walks a very thin line. He subverts cheesy genre cliches and handles his characters with care. Most importantly, he continuously takes important risks that keep the audience interested. He makes You’re the Worst a visually engaging show with every episode — “The Inherent Unsullied Qualitative Value of Anything” brings all the plotlines to their climax, all while framing the episode with one shot (with the exception of commercial breaks).

The only thing I don’t like about You’re the Worst is that not enough people are watching it. Its most recent season, which ended this November, was a definite risk on Falk’s part and while it does stumble a bit, it ultimately sticks the landing. You’re the Worst is one of the best comedies on television right now, and if you’re not watching it, you’re missing out.