RAW FROM THE SAW – Film Review: The Killing of a Sacred Deer 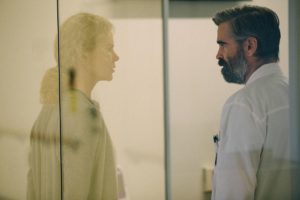 The Killing of a Sacred Deer attempts to be a suspenseful psychological thriller verging on horror. I say attempt, because the most tense and nerve wracking moments are almost comical, producing a sort of tragicomedy. Yorgos Lanthimos, writer and director of The Killing of a Sacred Deer utilized a similar method in 2015’s The Lobster, where he creates a universe that has to be fully believed by the viewer, sometimes resulting in absurdity.

The Killing of a Sacred Deer is based on the ancient Greek play Iphigenia at Aulis, revolving around leader Agamemnon’s having to sacrifice his daughter Iphigenia as a way of appeasing goddess Artemis prior to the Trojan War so his troops prevail. Agamemnon was responsible for the death of a sacred deer belonging to the goddess, and she suspended the winds required to sail to Troy. Agamemnon then struggles with choosing between either killing his daughter or having his family be killed back in Troy by opposing soldiers. In The Killing of a Sacred Deer, this story is used both metaphorically and literally. No deer is killed at all.

The movie opens with Dr. Steven Murphy (Colin Farrell) performing surgery, a close up of organs so intense, you might be wise to look away, a conflicting response Yorgos elicits throughout. The next scene is of Steven and a teenage boy, Martin, played by breakout star from Dunkirk Barry Keoghan. As a viewer you begin questioning Steven and Martin’s relationship — if it’s malicious, or because Steven is cheating on his wife, Anna (Nicole Kidman). Even at the end of the film, you might be walking away with a sense of confusion and uncertainty.

Steven operated on Martin’s father, which ultimately resulted in his death, similar to the death of Artemis’ sacrificial deer. Martin then somehow causes an illness to infect each member of Steven’s family, beginning with paralysis and ending in death. He then forces Steven to choose which member of to kill; otherwise, they all die. Therein lies the metaphorical choice of the sacrificial deer. After Steven accepts his choice, the latter half of the movie is spent deciding who deserves to live. He travels to his children’s school to speak with their principal and see if one is more intellectually-inclined than the others. The principal describes an enthralling paper written by his daughter about the story of Iphigenia at Aulis. As he goes through the decision making process, each family member does ethically questionable things to try to not be the one he kills.

Yorgos finds a way to simultaneously make you care about his film using suspense while also allowing viewers to detach from its minimalism. On the one hand, the cinematography is clean and neat, yet enticing and unique drawing the audience in. He utilises blank space and wide frame shots to draw attention to the action in the scene. My personal favorite shot was an above view of an escalator, reducing the characters to insect-size while magnifying the drama within the scene. But where the film falls short is in the music score. The film is peppered with electronic tones which add drama, but rarely any actual music. I find a good score helps truly connect to the plot, especially in a psychological horror film.

Yorgos asks you to set aside your judgement and permit yourself to truly go on the journey his movies take you. Even though The Killing of a Sacred Deer leaves you with more questions than answers, the questions will weigh on you. How do you decide who should live and who should die? Do all actions require someone to take responsibility? Where does the responsibility lie? Is there moral rightness to deliberately being responsible for someone’s death if it means saving more people?