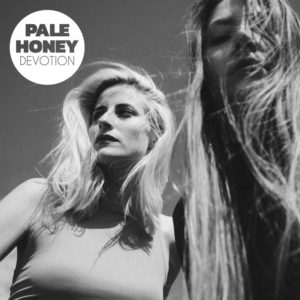 There’s something truly cryptic about Pale Honey’s latest release that’s impossible to put a finger on. The mellow, heavy sound is spellbinding. There’s something dark and intimate about it, and that’s what makes it so beautiful. The duo offers a twist on the guitar-and-rhythm exclusive band, something long played out by bands like The Black Keys, and they turn it into their own sound. Started by Nelly Daltrey and Tuva Lodmark, two young women from Sweden, the band offers a smooth, indie rock sound you can’t hear just anywhere.

Devotion is the band’s sophomore release, and it shows. Their self-titled release features a much more eclectic and less mature sound, one that hadn’t quite decided what genre it was. In contrast, the new release is much more cohesive, with a dark, witchy sound that displays a great deal of raw emotion. The downside to this controlled sound, however, is it never allows this raw emotion to come to a head. There isn’t a climax, just one long note, almost like the soundtrack to a movie you’d pull up again and again. This isn’t necessarily a bad thing, and it’s best represented with songs like The Heaviest of Storms (Devotion, pt. 1), which allows for a very mellow listen, one you can choose to focus on or leave in the background while you go about your day.

The lyrics are beautiful, but they don’t seem to be the focus of the album. Instead, like the album itself, they provide a smooth cadence overall, rather than shouting at the listener to pay attention to them. They offer the same emotion as the tone of the album, one that’s almost mournful and angry. Tracks like “Get These Things Out of My Head” display it best, with lyrics like “still this storm inside of my mind/all the words I’ve tried to deliberate/turned me inside out,” which represent the pleading sound of most of the lyrics on the album as a whole. It’s raw, it’s emotional, and it’s consistent, all of which are a good departure from the band’s first album.

It’s hard to say exactly what feels so right about Pale Honey’s Devotion. It’s haunting, it’s soft, and it’s intense, for sure, but there’s so much more that’s difficult to pinpoint. But it’s easy to say that, for a relatively new band, it pinpoints the exact place it needs to be. Without an extreme change from their first release, and it truly shows a maturity and cohesiveness that will make the band a name in indie rock for years to come.