Taylor Swift Wants You to Hate Her

And other reasons we’re somehow still talking about Taylor Swift.

Taylor Swift began her story innocently. She was just a girl with a dream, a great voice and a knack for stringing words together to make something that struck a chord in those who heard her. Along the way, something went terribly wrong. Or, is it terribly right? Swift went from America’s sweetheart to America’s resentful ex; she became controversial, and that is the secret to her success.

The media is nothing if not filled with celebrity drama. The industry figured out a long time ago that squeaky-clean doesn’t equal big hits. Sex sells, and so does controversy. When Drake and Meek Mill made headlines with their feud in 2015, everyone was talking about it. Or, rather, everyone was talking about the 12 diss tracks released from the two combined.Hyping up the animosity between the two rappers caused people to take sides, and they voted with their dollar, bringing in revenue for both sides of the fight. 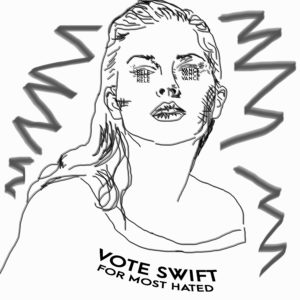 George Torok, a marketing agent, noticed a long time ago that this is marketing that works. “The secret to marketing is branding,” he says, “And powerful branding comes with both friends and enemies.” That’s exactly what these media moguls want: fans who will support them no matter what they do and people who will argue with their name and talent. After all, no press is ever truly bad press.

Some artists know this and capitalize on it. Swift herself learned this early in her career, during the infamous 2009 VMAs. This is the moment Taylor Swift got her first taste of the popularity machine. As soon as Kanye grabbed that mic from Swift, he cemented her to go down in history. Swift made herself a career out of controversy. First, showing herself as a sweet country girl in her albums Taylor Swift and Fearless; then, a girl who was relatable in love with Speak Now and Red. This worked for a while, but eventually grew stale as society turned on her, calling her a slut, saying she was the problem, and making fun of her lyrics and relationships.

So, she rebranded. Single girl living in the big city! Welcome to the era of 1989. But then, people came for that, saying that her “girl group” was fake and personality constructed. Finally, Swift gave up, and decided to create a persona nobody saw coming — one who was totally and completely over every other personality she had constructed by herself and the media in the upcoming album Reputation. And the one thing that all of these personas had in common? They all shared something that made at least some people dislike the person she had become.

Valerie Digloria is a second-year Writing for Film, Television, and Emerging Media major who did not watch the music video for “Look What You Made Me Do.” You can reach them at vdigloria@ithaca.edu.