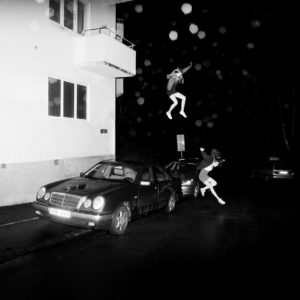 The following sentence is likely the most played out joke in music history: There is a brand new Brand New album.

And then suddenly it did.

Where to begin with Science Fiction? The expectations for this album were mammoth. When a band takes eight years to make an album, it better be worth it. Especially if that band is a band that made a masterpiece like 2006’s The Devil and God Are Raging Inside Me. In today’s music industry, that is an insane wait for new music. The wait combined with fans’ expectations created a metric ton of hype for this album.

Not only did Brand New meet those expectations, they exceeded them and made a damn near flawless album.

Science Fiction is a front to back experience. It starts with a creepy atmospheric intro and then weaves its way through a dreamlike hour of gorgeous music. The atmosphere and vibe of this album is what makes it work. From bizarre samples to airy synths, this album is a masterclass in mood.

The music takes on a much more indie feel than Brand New’s past work. Whereas Daisy and Devil and God were much more abrasive, Science Fiction is much more chill. Instead of Fender Jazzmasters blaring through multiple fuzz pedals and screamed vocals, Jesse Lacey and friends opt for more acoustic guitars and lower, cleaner vocals. The result is a more mature and natural feeling record which suits this band so well.

The lyrics brush on a variety of topics including religious hypocrisy, mental health and even nuclear war. As always, they are incredible. Jesse Lacey’s ability to craft a message in his music is more potent than ever on this album. Every word on this album was carefully chosen and it shows.

This whole album is full of perfect tracks, but the standout moment on Science Fiction is how it closes. “Batter Up” is the most perfect eight minutes of music that have ever been put on an album. With Brand New likely disbanding soon, it was expected that they would give us a farewell track and by God is this the best farewell track. Not only are the lyrics perfect, but the instrumentation is exceptionally poignant. The harmonized, reverbed guitars that paint the track are tear inducing. This track is a beautiful way to end this album and thus, a beautiful close to Brand New’s incredible career.

Science Fiction is one of the best albums made this decade and furthermore this century. Someday, kids will discover this album (and this band) the way the kids of today discovered The Smiths and cherish it as a piece of 2010’s nostalgia from when their parents were their age. May Science Fiction always be remembered as one of the best albums of its generation. Thank you, Brand New.