RAW FROM THE SAW – Film Review: A Ghost Story 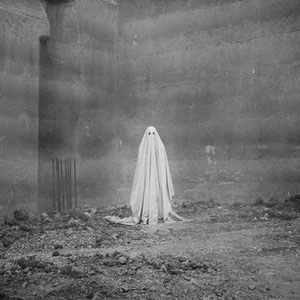 There is a nearly palpable despondency to David Lowery’s A Ghost Story; a hushed, poetic film that explores time’s staggering enormity, it is narrated by a story just as poignant as its subject matter. The film relays the woeful tale of a recently departed husband (Casey Affleck), who, after his death, reanimates as a specter donning a white bedsheet with two eye holes reflective of a child’s recreation of a ghost for Halloween. He remains an invisible presence upon his awakening and his return home, where he finds his bereft wife (Rooney Mara) mourning his death. He watches her learn to navigate a life without him; and unbeknownst to her, the spectral companionship that now exists in their house was once her husband.

Unable physically console his wife, all the ghost can do is watch. His increasing disorientation, brought forth by the absence of control he wields over time and the people who inhabit the house, is acted out in the usual horror movie ploys of flickering lights, moving objects and the opening of doors. However, his actions are portrayed as not terrifying, but as the actions of a despairing spirit whose aggravation for his position in the universe is understandable.

How Lowery’s deft hand behind the camera draws open and delves into sorrow is what translates these feelings so directly. Scenes in which the camera lingers on its subjects long enough for the emotions of the scene to render the hearts of the audience quiet are his most effective, even if at times they feel interminable. There is a slight sense of monotony, the feeling of the tediousness that the ghost surely experiences. One particularly long take comes to mind, in which Mara’s character, called “M” in the credits but nameless in the film, devours a pie left for her by a consoling friend. Each second feels as if there will always be another to follow, its grueling five minutes comprised of the harrowing emotions so clearly illustrated upon M’s face. The unmoving camera allows the audience to understand the ghost’s reality of watching, waiting, unable to physically contact those he haunts, as if the white sheet that covers his body is a barrier between his word and theirs.

Eternity, and the immensity of it, lays heavy on the mind of our anguished protagonist. The endless nature of these scenes mirror the ghost’s hapless inability to change the situation around him. He stands in the background of many shots, a silent onlooker like the audience, watching something that at times feels too private for his and our eyes. These visceral scenes carry the somber notes that so define the film. Time, now rendered futile in the ineffable face of eternity, is nothing to the ghost, and we too feel this sense of dread for the clock’s sudden meaninglessness. And long after the doleful score rings out its final notes and the narratives dives and disappears into the vast history that these characters so yearn to be remembered by, a haunting figure hangs over the viewer; a ghost of their own, perhaps, that lingers long past the film’s close.