RAW FROM THE SAW: Trophy Lives

2016 seemed to be the year of celebrity breakups and not just for couples that were only together for 72 days (I’m looking at you, Kim). The Osbournes split after 33 years of marriage, Taylor Kinney and Lady Gaga have publicly decided to “take a break” from their relationship, and of course, there’s the messy ending of beloved Brangelina. As a culture, we love the love of two of our favorite celebrities almost as much as we love watching their relationships fall apart under the scrutiny of the public eye. To imagine a tabloid cover without a catchy headline about two stars breaking up is next to impossible, but we never hear much about the celebrity couples that have stayed together.

Sarah Jessica Parker and Matthew Broderick have been together for 19 years but are rarely seen on the cover of magazines or promoting their latest roles. In an interview with Daily Mail, Parker admitted “My secret is that I don’t talk about it. I don’t talk about my marriage.” It would be fair to say that both Parker and Broderick are a bit past their prime in the industry, which may have contributed to their healthy relationship. Parker hadn’t been cast in any big projects since Sex and the City ended in 2004 until her recent role in HBO’s new series, Divorce, and Broderick hasn’t seen much screen time since his role in The Producers in 2005. 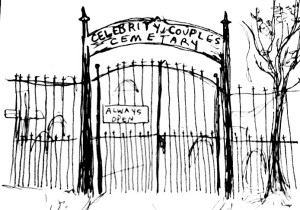 Spending less time in the spotlight has probably contributed to their marriage’s success. According to a Cosmopolitan article titled “Proof That Celebrities Break Up Because of Their Giant Egos,” fame can have lasting psychological impacts that make relationships more difficult to maintain. Psychologist and fame expert Donna Rockwell explains, “Famous people can become addicted to adulation from the public because it feels fantastic to have all these people loving you. It’s very, very difficult to turn that off because the pleasure centers of our brain get stimulated. We produce hormones that make us feel good when people are yelling our names and loving us from afar, even though they don’t know us.” Separating home life with work is hard in many “normal” relationships, but with a job that comes with the added pressure of publicity, it can be even harder to separate the two. Maybe Parker and Broderick have the right idea when choosing to not talk so openly about their marriage.

As for the couples that don’t work out, it’s easy to find out every detail about their breakup through the media, which in a sort of cyclic arrangement could also be a contributing factor into the failure of their relationship. In a Huffington Post piece titled, “Why Are Divorce Rates So High Amongst Celebrities?”, an anonymous blogger writes, “Even celebrities can and do develop crushes on each other over their image in the media. When you’re in a relationship with one of them, you get to see the real them.” Not that the media is to blame for breakups directly, but it could potentially add to the messiness of many celebrity breakups. This effect was seen recently with the rumors surrounding the Brangelina divorce; everything from cheating to child abuse was spread around with the joint statement they released citing “irreconcilable differences.”

Although it seems like every day a new breakup happens in Hollywood, divorce has become so normalized in our culture that celebrities don’t necessarily split up more than normal people do. The Huffington Post article said it best: “For an American celebrity, getting a divorce is ‘one of the things many people do here.’ For a British celebrity, getting a divorce would more feel like a fail and unusual because they see Hugh Laurie and his wife Jo Green, Victoria and David Beckham, Sting and Trudie Styler.” It may have an added effect on just how much of a pedestal Americans put celebrities.

All in all, there doesn’t seem to be too much of a difference in the break up rates of celebrities versus the general populace; the former is just more reported on, therefore seemingly more prevalent. Rockwell suggests that in order for a celebrity’s relationship to work out, self-awareness is key to differentiating between their famous persona and who they are in their personal lives. And if that doesn’t work, they can always afford therapy.

Alexis Morillo is a second-year journalism major who is placing bets on how long Selena Gomez and The Weeknd will last. You can reach them atamorillo@ithaca.edu