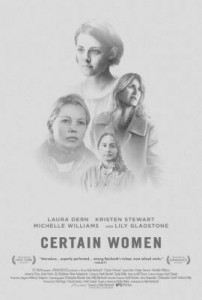 Certain Women is a movie with a narrow scope, small conflict and small rewards, anchored in the rustic naturalism of desolate Montana. Writer/director/editor Kelly Reichardt, who previously helmed Night Moves (2013) and Meek’s Cutoff (2010), delivers a raw, true-to-life look at the lives of three women, illustrated in three mostly separate vignettes.

In the first, Laura Dern is a lawyer dealing with an entitled man — played by an unrecognizable Jared Harris — who suffered an accident on the job and believes he’s been screwed over by the government. In the next two, Michelle Williams is a mother on a quest to get some sandstone to build a house, and Lily Gladstone is a rancher who develops an odd attraction to a school teacher/lawyer (Kristen Stewart) after seemingly-accidentally stumbling into her night class.

There’s no score, and very rarely does a song play on the radio or in a restaurant. The cast is mostly subdued and there’s barely anything stylish to the direction, either; the shots are mostly long and filled with silence, and the characters more often speak with that silence than with dialogue.

The most exciting piece of the movie is a small, energetic farm dog that comes in during the third vignette, and the animal has no bearing on the plot whatsoever. (He did make the old people in front of me giggle whenever he was onscreen, though.) He’s just a jumpy, little, brown ball of unconditional love and loyalty, chasing around the rancher’s tractor until he finds something better to do.

But there’s nothing that ascends to the high theatrics of typical small-family dramas in Certain Women. It’s the anti-August: Osage County, more interested in metaphors and character studies than in closeups of Meryl Streep bawling her eyes out.

The performances, though muted, are uniformly spellbinding. Dern especially shines here, her character frustrated by the incompetence of the men around her and her inability to reason with her headstrong client. But more surprising is Stewart, the school teacher/lawyer stuck with a four-hour drive to a nighttime law class she hates teaching. Stewart not only isn’t as awful as we’ve perhaps come to expect the former Twilight star to be, but she actually charms us. Her quietness and poise are the most striking elements of the final vignette — aside from the dog, of course.

There’s a charming simplicity to Certain Women’s naturalism, to its narrow ambition, to its tales of strong women who aren’t fighting for anything epic or glorious, but who are just living, floating by steadily day by day and law class by law class.