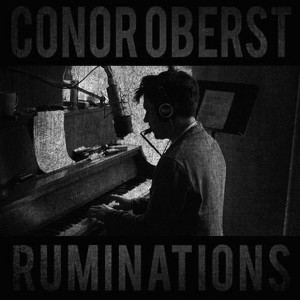 “We’re in a mass grave,” Oberst tells us, in the opening line to his new album Ruminations. The new album, consisting of ten songs, was written by Conor Oberst in two days after moving home to Omaha, Nebraska from New York, New York. The first song, “Tachycardia,” perfectly sets up the Oberst music we’ve all come to know. “She spills the coffee grounds, and the same thought hits her like cinder block: Life’s an odd job that she don’t got the nerve to quit.”

The album was written while Oberst was recovering from a health scare — a cyst in his brain. These songs allow the listener into his head at the time, with repeated mention of death, rain, sex, and home scattered throughout the melodies. His typical scratchy pitch remains the same, but in this album I’m jolted into a very different setting than his previous. This time his lyrics feel more urgent, like if he doesn’t get his words out everything will end right then and there.

The album tackles many elements of sickness and the emotional and physical toll it can take on a person. Being an artist who has suffered mentally time and time again, Oberst uses this album as a look into the physical elements of health. In the seventh song on the album, “A Little Uncanny,” Oberst sings, “I miss Christopher Hitchens, I miss Oliver Sacks, I miss poor Robin Williams, I miss Sylvia Plath.” These are all icons who died from an illness, some of the body and others of the mind. Hitchens and Sacks both had physical illnesses, while Williams and Plath both died by suicide. In Oberst’s old music of suicide and depression there was always a reminder that it was an internal illness. In this record we’re constantly reminded that there’s an even bigger threat, that a factor outside of his own head could kill him too.

“A Little Uncanny” also serves as the song on the album that’s even close to being upbeat. The rest follows the same plateau of Oberst’s classic drawl. A combination of harmonica, guitar, and piano, the album is able to remain in the same constant. It’s closer to his older works in that he doesn’t play with synthesizers or big band instruments. He’s falling back on his early instruments, the ones that got him to the point in his career that he is now.

The final song on the album is “Till St. Dymphna Kicks Us Out.” St. Dymphna is known as the patron saint of all the nervous, emotionally disturbed, mentally ill, and all those who suffer neurologically. This song, along with containing some of the most beautiful lyric work in the album, brings me back to the original Oberst. The one who focuses so deeply on internal suffering. “Be careful with your headphones on. When you cross the FDR, don’t want to be a casualty before you make it to the bar. And hide your shapes and worried face…” The entire album follows the same mood of pain and fear but Oberst is able to twist his words and change up the melodies in a way that the message never feels tired or overused.

This album is filled with some of his best, most imaginative lyrics yet. There are constant shifts in story structure, melody, and rhyme that allow the listener to feel as though they’re scrambling to get their head above water as much as he was at the time. The momentum remains throughout the album, despite the constant shifts between the main guitars and pianos. Oberst is a master of his domain, able to remain current in a career that spans multiple decades. Oberst has a talent for tapping into universal pain — whether it’s illness, suffering, or sorrow. Oberst has opened himself up to an even wider audience than before in Ruminations that recounts the experience of both mental and physical injury.