According to the Society of Professional Journalists,“It is the role of journalists to provide information in an accurate, comprehensive, timely and understandable manner.” Today, it is nearly impossible for a journalist to pursue this mission while they are constantly facing surveillance, persecution, censorship and even being arrested. It is no longer possible to actively and accurately practice balanced journalism as has become evident through the cases of Patrick Lagacé and Amy Goodman.

From January to July of 2016, Patrick Lagacé, columnist for Montreal’s La Presse newspaper, was under surveillance by Montreal Police. The police obtained 24 warrants during this time for the purpose of activating the GPS chip on Lagacé’s phone in order to track his location and obtain the cell phone numbers of people that he was in communication with. 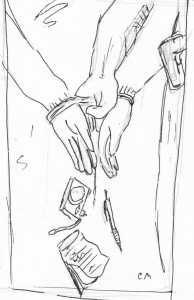 Montreal police chief Philippe Pichet attempted to justify his department’s actions by stating that the mission was an exception to their usual actions and was necessary in order to gain information on a police department employee. The information that they were looking for was in regards to internally fabricated evidence, according to the National Observer.

“This operation targeted one of our officers and not Mr. Lagacé …The SPVM [Montreal Police Department], and myself, we are very conscientious about the importance of respecting the freedom of the press. However, the SPVM also has the responsibility to carry out investigations on criminal acts – even against police officers,” Pichet said.

Pichet urged that no laws had been violated through the police department’s actions and called for a meeting with Lagacé to explain the procedure.

Lagacé did not embrace the explanation that was fed to him, but instead spoke out to defend his rights as a journalist.

“I don’t care about courtesy, I care about freedom of the press,” he told CBC Radio.

La Presse’s staff stood behind Lagacé in his pursuit of journalism as well as his reactions to the Montreal police. The vice president of information at La Presse, Eric Trottier, spoke out against the police’s actions.

“[It is] an unequivocal attack on the the institution that is La Presse and against the entire journalistic profession.”

NSA whistleblower Edward Snowden also responded to the situation through Twitter, writing “Are you a journalist? The police spying on you specifically to ID your sources isn’t a hypothetical. This is today.”

Snowden is completely accurate in his warning to journalists. Today it is more difficult than ever to become a journalist who reports on important information without being censored or stopped by some type of authority. The Montreal police department is not the only establishment infringing on the right given to Canadian journalists in the Canadian Charter of Rights and Freedoms, as well as to American journalists in the First Amendment.

Since 2001, with the passing of the USA PATRIOT Act, journalists in the United States have been silenced, prevented and persecuted. It was written by George W. Bush’s administration in response to the 9/11 attacks as a way to protect the American peoples. However, in its given state, it has the power to limit First Amendment rights, specifically in Section 215 of the act, over which the ACLU has had two major lawsuits. It gives U.S. intelligence agencies more power and oversight over the American people.

When the PATRIOT Act first became law, most American media outlets did not question it, or America’s entrance into the “war on terror,” which set the stage for the beliefs of the American people.

Washington Post columnist David Ignatius sums up Bush’s intentions well in saying, “The Bush administration was working to sell the wars and covert programs to journalists.”

Another case in which a government has tried to halt the pursuit of honorable journalism is Amy Goodman’s reporting on the North Dakota Access Pipeline. Goodman and her team at Democracy Now! did what any journalist seeking the truth would do: They traveled to North Dakota to report from the field and were answered with an arrest warrant.

The Dakota Access Pipeline is a project that was imposed by Energy Transfer Crude Oil Company, LLC in order to construct an oil pipeline spanning 1,172 miles, connecting North Dakota to Patoka, Illinois. If it is completed, it will transport approximately 470,000 barrels of crude oil per day. The issue with the construction of such a ginormous project is not only the effect that it will have on climate change, but the land that they are destroying during the pipeline’s construction.

The construction of the pipeline is tearing through the reservation of the Standing Rock Sioux Tribe, destroying their sacred ground. The destruction of their lands is unlawful according to the United Nations Declaration on the Rights of Indigenous Peoples. Article 27 of the Declaration states: “States shall establish and implement, in conjunction with indigenous peoples concerned, a fair, independent, impartial, open and transparent process… to recognize and adjudicate the rights of indigenous peoples pertaining to their lands, territories and resources…”

But as we know from past experience, the United States government likes to go back on its promises.

Goodman believed so strongly in the Sioux Tribe protest that she did not waver in her coverage. An arrest warrant was sent out for her after she was charged with “criminal trespassing” for getting too close to the scene and interviewing those affected. Goodman, however, did not break the law; she was doing her job as a journalist which is protected, or should be protected, by the First Amendment.

“Charging a journalist with criminal trespassing for covering an important environmental story of significant public interest is a direct threat to freedom of the press and is absolutely unacceptable in the country of the First Amendment,” said Delphine Halgand, U.S. director of Reporters Without Borders.

However, the nonsense did not end there. Goodman’s charges were upped by Morton County, North Dakota to a riot charge. This is a misdemeanor punishable by jail time and a fine.

Partially due to Goodman’s intensive coverage of the North Dakota Pipeline, the Obama Administration surprisingly delayed the construction of the pipeline and will “invite tribes to formal consultations” about federal rules, reported Robinson Meyer of The Atlantic.

Since then, however, things have escalated once again. The protesters are now facing freezing temperatures and snowstorms to stand up for what they believe in. They have changed their quest to focus more on the protection of the groundwater that the pipeline will run through and police have become more brutal. In the past few weeks police have utilized rubber bullets, bean bag rounds, water cannons, tear gas grenades and concussion grenades, according to Democracy Now!. These heinous acts have injured hundreds of people.

The protesters no longer only include Standing Rock Sioux tribe members and members of other tribes, hundreds of activists and other groups of people have now joined in support of the Standing Rock and their rights. On Dec. 1, U.S. military veterans joined in the effort to act as a human shield for the protesters against the police forces.

Matthew Crane, a 32-year-old Navy veteran arrived at Standing Rock with a one way ticket with no plans to leave until the protesters were successful in their mission.

“I bought a one-way ticket,” he told Reuters. “Hopefully we can shut this down before Christmas.”

It will be interesting to see what unfolds next at Standing Rock, but it is evident that Amy Goodman and Democracy Now! Will be the first to cover it.

In a 2003 interview with Anna Wilde Mathews of The Wall Street Journal, Goodman references the way she pursues journalism.

“Reporters have opinions, we have to be honest about them,” while providing fair and accurate coverage, she says. “…I am an anti-war reporter,” or a “media activist.”

Maybe instead of attempting to pursue journalism the way that is taught, journalists should join Lagacé and Goodman in their pursuit of media activism.

Maddison Murnane is a third-year journalism major who does not want her future career co-opted by the Patriot Act. You can contact them at mmurnane@ithaca.edu.