Eyebrows at the peak of cosmetic fashion

Eyebrows have arguably become one of the boldest aspects of the beauty and cosmetology industry. Celebrities like Lily Collins and Solange Knowles have been praised for the bushier style brows in articles like Glamour’s “The Best Celebrity Eyebrows” listicle from Sept. 2016. The fact that such a listicle exists, in itself, is a testament to just how obsessed our culture has become with brows of all shapes and sizes.

Big beauty brands are playing off of this obsession by constantly releasing new eyebrow products or amping up their old products. For example, Benefit is a beauty brand not only known for their makeup but also for their “brow bars.” Quite literally, the brand provides stand alone salons and those inside chain beauty venders like Ulta, that focus specifically on eyebrows. An expert guides customers to the brow shape that works best for their face and then helps them choose the products that will help them reach their full brow potential. On top of this, Benefit just released a line of exclusively brow-related products that included ten different cosmetics for people to choose from and for the company to profit off of. 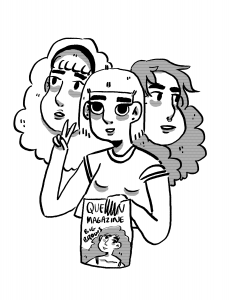 Plucking and waxing are mainstream strategies to achieving artful arches, but a variety of new methods have gained popularity due to individuals looking to fill in their brows that they feel are too sparse. Besides traditional makeup techniques, a new trend, known as “microblading,” has popped up. An Aug. 2016 Grazia Daily article explained that though this method is most helpful for chronic hair loss sufferers, this tattoo-like process can be used by anyone to make their eyebrows appear more full yet still natural. The artist uses a pen-like needle tool which gives them more fine control to make thin, hair-like lines in the brows.

According to MarieClaire, the quest for the perfect brows can date all the way back to about 3500 B.C. when Egyptian men and women used carbon and black oxide to achieve eyebrows arched and shaped to their liking. Now, people are using everything from brow primer, pencils, gels, shadows, stencils, microblading and even…glue sticks. This past October, “beauty gurus” on YouTube, like the new face of Covergirl, James Charles, used glue sticks as a technique to achieve their perfect costume makeup according to Teen Vogue’s “YouTubers Use Glue Sticks to Get Perfect Eyebrows”.

However, this cosmetology trend didn’t start within the beauty community on YouTube. In fact, it can be attributed to the drag community as it’s been a technique that is used to conceal one’s natural eyebrows in order to shape them for their drag makeup. The technique has been dubbed “brow blocking” and utilizes a glue stick to push the eyebrow hairs upward and create a smooth surface to be concealed using makeup. Essentially, a blank slate is created for the drag queen to have full freedom in how they shape their brows. As stated in a RuPaul’s Drag Race Reddit thread, “Most men don’t have a whole lot of eyelid to work with, so, by covering the brow, it allows them to move the eyebrow up opening the eyelid.” So the glue makes it possible for drag queens to maximize the surface area available to achieve the dramatic eye makeup look of their liking. The concealing of brows can help a queen achieve a more overtly feminine look according to Reddit user @blogginglife on the aforementioned thread. “Men have naturally lower brow bones, so using your natural brows instead of bring your crease to your brow bone can make a drag queen look masculine.”

Not all drag queens choose to use brow blocking during their makeup routine. Some go as far as shaving off their entire brows in order to have complete freedom with their looks. Famous drag star RuPaul even tweeted their advice in 2014, “First Time in Drag: Shave your eyebrows off completely and paint them on properly!” Some queens choose to do exactly that instead of dealing with the sticky side effects of glue brow blocking, while others work with their natural brows and add makeup to achieve their desired look.

This makeup technique is not only used by those in the drag community. As YouTubers have shown recently, brow blocking can be useful when it comes to any special effects makeup or cosplay looks that call for an exaggerated or specific shaped eyebrow. Just be sure to use a washable glue stick before attempting brow blocking in order to avoid any accidental brow disasters. And if that doesn’t work, you can always just start off with a blank canvas and shave them off completely. No matter the case, as long as our society stays focused on the importance of perfect brows, there will always be a product — glue or not — that can be used to help one’s brows reach their full potential.

Alexis Morillo is a second-year journalism major who believes a brow is only as bold as the one who’s filling it in. You can reach them at amorillo@ithaca.edu.