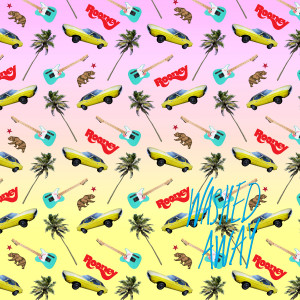 Cali-reppin’ alt. rock band Rooney made a stop at The Haunt on Oct. 28 during their first tour since 2010. The Haunt, aside from a few minimally obtrusive costumes and A Nightmare Before Christmas playing where sports usually do, had the same event-night vibe as always: relaxed, with the occasional waft of cigarette smoke and beer.

Rooney was joined by Austin-based band Swimming With Bears and Royal Teeth of New Orleans as co-openers for The Groundswell Tour. Swimming with Bears had a smaller crowd to start, as people were still trickling in during their set, but such a situation didn’t impose too greatly on their performance.

Lead singer and bassist Joe Perry has a vocal quality similar to that of Santigold in the freedom of his tenor range. He and the rest of the foursome played appropriately to their audience, gauging the level of participation during higher energy songs like “Do What You’re Told.” The audience was invited to clap, though trusting them to uphold the responsibility through an entire song was, as always, a bit of a gamble.

Royal Teeth was next to take the stage. It took a few songs for the whole of the band to seem entirely comfortable, covering José González’s “Heartbeats”—a cover they had recorded in 2012—early in their set as a familiar warm up. Lead vocals by Nora Patterson were enough for her not to feel nervous. She hit all the right notes, literally, and her performance of “Kids Conspire” off of their upcoming EP Amateurs was full of seemingly effortless belts at the chorus.

Gary Larsen lended his vocals in harmony as well to lead a few tracks, swapping between guitar, ukulele and floor tom in support of drummer John Hefner’s already-energetic beat-keeping. Energy was definitely not lacking well into their set. Larsen spent any spare moment amping up the crowd that really didn’t need any extra amping. The sphere of interaction between artist and concert-goer was so manifested that it was almost overdone. The audience seemed to be naturally enticed to such a degree that the extra designated clap-time and sing-along moments didn’t have much more of a pull.

Finally, after running around Ithaca promoting his directorial debut of the film Dreamland with a Q&A at Cinemapolis, Robert Schwartzman and the members of Rooney made it to their set. Schwartzman, casual and true to style as ever in his trucker hat and jean jacket, made his way upstage, the California state flag–inspired banner, Rooney’s signature, hanging practically full-mast in the background.

Though Rooney has a different member lineup than when they originally formed, they didn’t leave out any of their old classics. Rooney opened with “Blueside,” the first track of their self-titled album from 2003. And just like that, long-time listeners of the band were thrust back into the glory days of the early 2000s, recalling memories of the younger Schwartzman featured in The O.C. and The Princess Diaries. Though in this setting, if he didn’t attempt to eat M&M’s off of his guitar, the audience would probably understand.

The entirety of Rooney’s set was in itself a tour of each of their four full-length albums, introducing the recently released album Washed Away in between old classics pre-hiatus, accessing a familiarity and quality identical to that of the studio recordings. Patterson of Royal Teeth joined Rooney on stage to perform “Why,” a duet originally recorded for the new album with French singer-songwriter Soko.

Rooney’s interaction with the audience was natural, an attitude they have had 10 years to perfect. During song transitions, Schwartzman wasn’t shy, and got right up to the edge of the stage with his guitar.

By the end of the set, much of the audience had taken their phones out (#doitfortheinsta), capturing moments of the Washed Away single “My Heart Beats 4 U” as well as old-favorites “I’m Shakin’” (Rooney) and “When Did Your Heart Go Missing” (Calling the World) as closers. Schwartzman at one point reached down and took hold of a front-rower’s iPhone, getting the closest close-up of himself for their video.

Rooney’s been around long enough to come back for the crowds that know them the best and maybe make a few new fans on the way. Whether a planned attendance or just a stop on the way to the rest of the weekend’s festivities, Rooney proved that even 10 years into the game, their sound is worth sticking around for.