In Pursuit of Truth

Why objectivity at all costs hurts journalism

Objectivity is one of the pillars of traditional American journalism. Reporters are told they must report dispassionately and without bias when writing a story, along with seeking the truth and being accurate. However, some believe objectivity is an outdated model and doesn’t necessarily lead to a story that adequately informs the public.

Proponents of this view point out that some of the best works of journalism have shunned the traditional model of objectivity. Upton Sinclair’s “The Jungle,” Bob Woodward and Carl Bernstein’s Watergate coverage and

So how did this obsession with being objective and unbiased come to permeate most of the mainstream media we consume today?

The history of objectivity
Michael Schudson, a journalism professor at Columbia University, said objectivity has gradually become normalized in American journalism. He said during the 19th century, journalists were hardly ever objective and reporters often had a political agenda in mind.

“The job was supposed to be a partisan cheerleader for the party the paper was affiliated with,” Schudson said. “That’s a different model, and what I see as the progress of journalism [is] journalism has become less of a political instrument and more of a professional pursuit.”

The power of the partisan influence of journalism has been shown in history time and again. For example, Schudson said during World War I, the news media was crucial in shaping public opinion. He said journalists were pieces of propaganda and openly sided with the allies and labelled Germany as the aggressor in the conflict.

Issues with objectivity
Today, however, journalism’s commitment to objectivity may have gone too far. David Cay Johnston, a Pulitzer Prize winner and author of the biography “The Making of Donald Trump,” said journalists are self-censoring themselves in order to be objective. Oftentimes, he said coverage of politics seems to advance the interest of politicians rather than improve the public’s knowledge.

“When we come to matters of politics and long, ongoing stories, I think that journalists should assert their authority and say ‘this is what’s important and we’re going to talk about this’ and give less coverage to what the politicians think is important,”Johnston said.

Additionally, Johnston said journalists are too focused on the accuracy of their reporting in terms of quoting sources correctly and spelling names right. He said journalists must go beyond these basic aspects of reporting and make sure all the facts are truthful.

Schudson agreed, saying even when reporters are being completely objective and simply describe events that took place accurately, they could be doing a disservice to the public and abet the spread of misinformation.

Schudson puts it this way: In a debate, candidate A says the world is round, while candidate B says the world is flat. We know the earth is not flat, but Schudson said if the reporter covering this debate reports these two sides of the story equally and leaves it at that, then the reporter has been completely objective but has also aided in spreading misinformation.

“They haven’t objected their own views into the story,” Schudson said. “Is that enough for journalism? If that’s what objectivity is, then that … is a very impoverished notion.”

In cases like these, Schudson said it is journalism’s responsibility to recognize candidate B is mistaken and set the record straight.

This issue often comes up when journalists limit their stories to containing just two sides. What happens if, as in the case of the flat earth example, one side is presenting inaccurate information? Too often though, journalists include that perspective anyway and it becomes legitimate to the audience.

Steve Buttry, director of student media at Manship School of Mass Communication at Louisiana State University, said for this reason the “he said, she said” concept objective journalists tend to follow is flawed.

“[That approach] isn’t enough if one of them is lying, or just honestly mistaken,” Buttry said.

Schudson said he sees problems come up with this kind of journalism in coverage of the Republican Party’s denial of climate change. He said it’s troubling when political officials refuse to believe scientific facts, but that it’s the journalist’s job to state each side’s stance and to refute an inaccurate one, such as the GOP’s position on climate change.

Overall, Schudson said a journalist needs to do more than just present two sides to the story.

Objectivity and the human condition
Another reason objectivity in journalism is problematic is that it’s difficult to achieve. Journalists are, after all, human beings. They carry baggage with them, which can include personal connections with stories or strong opinions on certain issues. This often makes it unrealistic to expect a reporter not to be biased in some way when telling a story, Buttry said. 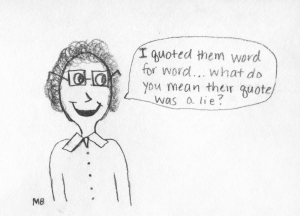 “The simple truth is we are not objects, we are people, and that’s both good and bad,” Buttry said. “We’re imperfect and we have opinions.”

However, Buttry said he is not altogether dismissive of the idea of objectivity because he believes it is sometimes possible for journalists to keep their opinions out of their work. Twenty years ago, he covered abortion for the Omaha World-Herald and he said he had to gain respect from extremists on both sides, which meant not revealing his opinion on the issue.

However, Buttry said he has run into conflict with being objective in his reporting. In 1996, he did a story on the 25-year anniversary of the championship title of a women’s basketball team and how this team impacted their small town and women’s sports in general. He had two personal connections with the story: one of the players was his sister-in-law, and he ended up interviewing her sister.

In this case though, not being objective helped him tell a better, more informative story.

“My history helped me get some interviews and tell the story well,” Buttry said.

Overall, Buttry argued that it is difficult to remain objective, even for those at the top of newsrooms. He said when editors make decisions on what is newsworthy and what isn’t, those decisions are influenced mostly by their own opinions.

Objectivity and the election
Glenn Greenwald, one of the founders of The Intercept, has been a long-time critic of objectivity in the media. And during this election cycle in particular, Greenwald has criticized other journalists and corporate media for using “faux objectivity” when reporting. In his article written in March of 2016 titled “The Rise of Trump Shows the Danger and Sham of Compelled Journalistic ‘Neutrality,’” Greenwald wrote that media outlets are doing very little in expressing the threat Trump represents because of the traditional model of objectivity they have pledged to follow.

“Under this framework of corporate journalism, to denounce Trump, or even to sound alarms about the dark forces he’s exploiting and unleashing, would not constitute journalism,” he wrote in his article.

After Trump received the Republican nomination, the mainstream media has been more aggressive in criticizing him. However, the criticism seem to be too little too late, as the media failed to sufficiently take Trump on before he secured the GOP nomination.

Greenwald argued that this idea of faux objectivity isn’t new. He said during the presidency of George W. Bush, major media corporations censored themselves and failed to sufficiently investigate and criticize the United States’ involvement in the “War on Terror.”

“Most large media outlets suppressed journalistic criticism of things like torture and grotesque war crimes carried out by the U.S. as part of the war on terror, and even changed their language by adopting government euphemisms to obscure what was being done,” Greenwald wrote in his article.

This attitude can be seen in the fact that outlets such as the New York Times, Washington Post and NPR rarely published the word “torture” because they believed using it in articles demonstrated bias.

In this year’s election, in which Trump could potentially win the presidency, Johnston said journalists are failing to vet and look deeper into Trump’s agenda and are letting him get away with outlandish claims.

Johnston said journalists need to exert more confidence and be more aggressive when seeking out the truth, especially during this year’s election.

“Tell people that which they wouldn’t know, and explain to people what the story is about in [a] way ordinary readers will understand,” Johnston said. “Secondly, get some back-bone.”

What needs to change and who’s ahead of the curve?
Many independent media outlets have already — for the most part — abandoned objectivity, and they are still producing excellent pieces of journalism. For example, Mother Jones, an independent magazine, published an in depth, investigative piece looking at the startling problems in private prisons. The reporter spent four months undercover as a prison guard and exposed the harsh reality for those within the system. In his reporting, he refused to hold back his opinion on the deplorable conditions he found. Other independent media outlets are also producing groundbreaking stories without, and sometimes because of, their refusal to adhere to the traditional edicts of objective journalism.

Buttry said abandoning the constraints of objectivity doesn’t prevent journalists from producing quality work. Buttry said there needs to be continued discussion about objectivity in journalism. As a professor in the field, he said he doesn’t tell his students to be objective or not objective. Instead, he said he challenges his students to think about the concept as a whole — warts and all.

“I think we need to be honest about the flaws of objectivity,” he said.

Ana Borruto is a junior journalism major with biases — just like everybody else. They can be reached at aborruto@ithaca.edu.