Take One Down, Pass It Around

The origins of the classic college drinking game

Beer pong: a traditional game played by college students across universities nationwide that tests a person’s skills and alcohol consumption. Beer pong is one of the many drinking games that are played in college. It is not uncommon to walk into a pregame, an event where alcohol is consumed before going out, and find people playing card games and skill games revolving around alcohol. There are a few reasons why people play drinking games, but the most common is to ensure quick intoxication.

Common drinking games include flip cup, quarters and civil war. However with over 500 variations of drinking games, beer pong is the most traditional and well-known on college campuses.

Beer pong’s early equivalent known as Beirut (not the capital of Lebanon) is a game that contains 20 cups on each end of a table that are filled with alcoholic beverages which players try to hit with a ping pong ball. Beirut became more commonly known as beer pong in the late 1950s in the United States.

Crispus Knight, a writer from Dartmouth College and author of the book Three For Ship: A Swan Song to Dartmouth Beer Pong, brags how beer pong originated in the basements of Dartmouth’s fraternities. However, many other fraternities across the nation disagree and claim that their fraternities’ ancestors created beer pong long ago. Knight says that Dartmouth Pong was originally played with paddles and a maximum of three cups. Now, beer pong is traditionally played with ten cups and two ping pong balls. The idea of the game stays true to Beirut: one has to get the ping pong ball into the opposing player’s cup to make them drink. The winning team stays on the table until they are defeated by another pair of players. 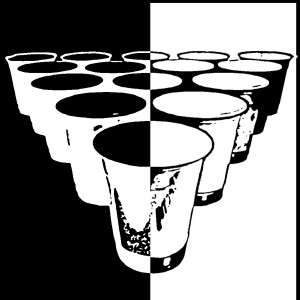 Winning a game of beer pong is similar to being crowned homecoming queen in an early 2000s Disney movie and the competition can become as intense as the 2016 presidential election. At Westgate Las Vegas Resort & Casino in Nevada, an annual beer pong tournament is held with over 1,000 people playing to win. The winning team receives 65 thousand dollars and the title of beer pong king or queen.

In a study published by the Journal of American College Health, titled “Self-Reported Drinking-game Participation of Incoming College Students” 1,252 students were questioned about their experiences with drinking games. The study cites another finding that drinking games were played by 65 percent of males and 61 percent of females on college campuses. Women were also reported to drink about the same as males during drinking games which leads to higher blood-alcohol contents because of biological differences in intoxication levels. Although the percentage is less than half at 21 percent of students reporting that they play drinking games to get another person drunk, the intoxication for females can lead to increased sexual contact. The National Institute on Alcohol Abuse and Alcoholism (NIAAA) expresses that binge-drinking can lead to blackouts, health problems and even death.

Drinking games can be a great way to socialize and have some friendly competition with peers; it might even give someone the courage to talk to the person they’ve been infatuated with since their freshman seminar. But behind all the excitement is the destructive side of binge-drinking.

Julia Tricolla is a freshman cinema and photography major who has absolutely no first-hand experience with beer pong. You can email her at jtricolla@ithaca.edu.