How pop culture and social media serve as a distraction

Over the last couple of years, the society we live in has become dependent on our electronic and mobile devices. We are constantly checking our phones every time they buzz and liking pictures on Instagram the second after they are posted. The constant use of these devices helps us keep up with what is going on at all times.

Cell phones provide us with instant gratification, efficiently transmitting messages, pictures, tweets, statuses — the list goes on. The accessibility of social media applications like Facebook, Twitter and Instagram provide us with a way of connecting ourselves with celebrities and other people around the world, whereas before these sites that was never even a possibility. However, this becomes a disadvantage because we often find ourselves more focused with the trivial occurrences happening on these social media outlets rather than what is happening in our country and other nations around the world.

This reliance on social media, and how it plays into an obsession with pop culture, has become a way for society to obtain information. “Pop culture” is a term that has gained popularity in the last few years and is simply a set of modern values and ideas that are broadcasted through the use of the media. In an article by psychologist Tim Delaney, he states that pop culture varies from the clothing people wear to the slang and dialect with which people speak to the foods that people consume.

Pop culture is used in society as a way to keep up with trends and stay connected with what’s going on. It is a way for people to follow stories and hear about the latest news. However, this causes people to miss things, civil trial attorney Scott Piekarsky, who has written about the topic of social media, said.

“If you just rely upon social media, you’re really only getting a small snippet about what is happening,” he said.

Only listening to what certain media sites are saying and focusing on certain aspects of culture does not give the full idea of the extent of a given situation. This reliance on the media and pop culture neglects the truth and creates a gap between what is actually happening and what the media wants its audience to believe.

We follow these trends because of the people we surround ourselves with and the constant everyday interactions we have with others. In some cases, it even extends to the celebrities we look up to and follow on different social media outlets.

Psychologist Debra Gold said one of the appeals of pop culture is that it can often bring people together.

“Pop culture makes you feel included,” she said. “People identify with each other through similar ideas and interests. This way you feel part of something, and close to people.”

According to a 2014 Arizona State University article, popular culture gives people a way of feeling in the know. 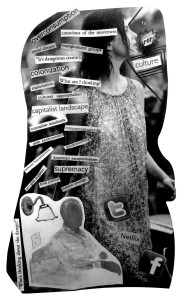 However, it also leads to distraction. As a whole, we are a very distracted group of individuals. Sam Amer, a retired pharmacologist, sees the United States as one of the most distracted societies. While we find it easy to keep up with what’s going on in the social world, real-world issues that are threatening our country every single day are often neglected. Social media can serve as a mechanism for organizing activism, but it is instead often a vehicle for focusing on the trivial. Many of us are unconcerned with matters like climate change and income inequality and many people do not even take the time to educate themselves on these matters because it’s easier to log on to Twitter than it is to read a newspaper article.

Amer said this contributes to a switch of priorities.

“Most Americans today care less about our national purpose, our commitment to equality and our basic democratic systems than they do about their Facebook updates,” he said.

We are flooded with the constant thought of what is going on in our lives online, while forgetting about what’s happening to our lives on a large scale. Amer said most of these distractions society faces are not new.

“But they have acquired increased vigor and intensity and ubiquity,” he said. “It is eroding our ability to pay much attention to the problems that we must address as a nation.”

Since social media ha been playing an increasingly intricate role in the way people live, it has changed the scale of what people consider to be issues. For instance, Gold said Twitter causes focus on the minutiae of people’s lives.

“It distracts people from some of the real issues such as war, hunger, social injustice,” she said. “People are focusing on how they just broke their fingernail, which elevates the smaller things and compares them to the real life issues.”

One example of when pop culture distracted attention from a real issue was during the Ebola scare, when the crisis spread through the media rapidly. The Ebola crisis was an awful epidemic that affected many all over West Africa. In March of 2014, when the Ebola outbreak was first reported, people were frantic and concerned about what could potentially happen in the U.S. as a result of this disease. After a few people were victims of this disease in a variety of states across the U.S., people took strong precautions. Meanwhile in West Africa, the BBC reported that the fatalities from Ebola ended in a total death toll of approximately 11,315 people in countries such as Mali, Sierra Leone, Liberia, Guinea and Nigeria.

However, amid the fright and terror this episode caused, a Halloween costume idea came out mimicking the Hazmat suits that doctors treating Ebola had to wear when in contact with victims. Johnathon Weeks, the man who created the Ebola costume, stated that this costume would be “the most ‘viral’ costume of the year.” While this illness was acknowledged and talked about almost everyday, this costume idea twisted the focus of a serious matter and turned it into a humorous occasion. Polly Mosendz of The Atlantic found that this created controversy among costume sellers and some businesses refused to carry this costume in their stores with the concern that it may be “crossing a line.” Pictures of this costume emerged on Twitter and spread quickly. Once people saw the costume, their focus altered from being concerned about this life threatening disease to the humor of this costume and the debate about whether it should be sold in stores.

This kind of situation has started to become a common occurrence. March` was International Women’s Day, a day dedicated to celebrating women around the world for their accomplishments socially, economically and politically. Although the United States is still a very patriarchal society, this is a day to acknowledge the progress women have made in trying to dismantle that patriarchy.

Amongst the amazing women that should have been the focus of the day, acknowledgement was instead shifted to a celebrity, Kim Kardashian, who decided to use International Women’s Day to feel “liberated” by posting a naked picture of herself on Instagram.

Considering Kardashian has not accomplished anything, socially or politically, many people felt offended by the way she went about showing she’s a woman. Many were opposed to this post because her post detracted from the obstacles that women face everyday. Instead, her post focused on the physical aspects of being a woman. This post forms an idea that women are what their physical assets allow them to be. Once a certain message is created, it can be easily accepted by people that follow media.

The distraction created by pop culture even extends to a necessity, such as eating. Pop culture has greatly influenced what we eat and eating has provided people with a way to keep up with pop culture. It is enjoyable to go to fancy restaurants and go out with friends, which often is a reason why pictures of our food are posted to social media outlets. Posting these pictures of our food is a way of showing our friends and family the food we consume. Writer Joe Pinsker said food is now used as a way to show wealth and luxury because instead of just eating a simple meal, we allow ourselves to eat elaborate meals.

Food is used as a way of showing off and it is constantly broadcasted on different social media. Giving attention to the luxurious aspect of food while ignoring the fact that some people do not even have access to food is a direct result of the constant involvement of people in popular culture. We have become so self absorbed regarding what we consume that we are oblivious to the problems and lack of food that others around the world face. There are approximately 795 million people in the world who are chronically malnourished, according to the United Nations World Food Programme. The Stop Hunger Now organization reported that in places like sub-Saharan Africa, about 23.2 percent of the population is hungry.

“Many teen girls desire to emulate unhealthy images of models or celebrities in popular culture,” writer Jody Braverman suggested in a blog post.

Eating the newest food and being on the newest diet fad is something we value greatly.

Continuously, pop culture has taken a toll on the way we think and act. The issues that actually pose a threat or have immediate relevance to our life are being disregarded because we are so focused on being a part of this culture. Whether it’s what we say, wear or eat, pop culture has consumed so much of our attention that we are distracted and cannot focus on the real issues occurring.

Emma Lewis is a freshman sociology major who doesn’t have to pick up her phone every second of every day. You can email her at elewis3@ithaca.edu.