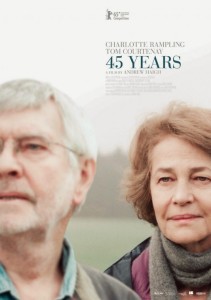 There’s no two ways about it: 45 Years is depressing. It’s a film so sunken in its story’s melancholia that even its panoramic landscape cinematography appears desaturated and misty, bucolic yet unmistakably sad.

45 Years presents us with a marriage fracturing, like an ice floe snapping apart on the ocean. The couple at the film’s core is Geoff and Kate Mercer, captured beautifully by Tom Courtenay and Charlotte Rampling. They’re both late in years and are preparing to celebrate their 45th wedding anniversary when a letter comes in the mail.

That letter is for Geoff. It’s from Switzerland. And it changes everything.

Kate wasn’t always the love of Geoff’s life, and the letter from Swiss authorities states that they’ve found the body of Geoff’s former sweetheart, who’d tragically died some time before Geoff met Kate.

Geoff descends into depression. All the mirth leaves their married life as Geoff becomes increasingly distant and adopts a more macabre outlook on the world. Courtenay plays the struggling Geoff with such a nuanced grasp of the character’s pains and the demons that have risen to haunt him. And as Kate, Rampling is quiet and gentle toward her husband while all of her frustration, doubt and ferocity is bubbling just under the surface.

Structurally, the film is split into days. As a window into the crumbling life of this couple, one might think the movie would go about its story in a more conventional, dramatic way. Yet, it’s just the opposite: it remains quiet and understated, its characters rarely shouting and all of the score removed. The only music in 45 Years is provided by the characters, in the world of the film.

The movie demands attention to the performances and the visual storytelling by showing the small, mundane moments. The Mercers talking over coffee with friends, Kate walking the dog in the morning, the Mercers’ conversations just before they go to bed. So much dramatic heft is placed on the little things, like Kate taking up smoking or the discovery of some pressed flowers in a book. These are key moments, told through visuals alone. One character doesn’t need to confront another in order for the reveals to resonate with the viewer.

The story has room to breathe, and the audience, room to interpret. Not since Michael Haneke’s Amour has a movie been this quiet and deliberately paced, yet completely engrossing.

45 Years is a film with a tremendously careful presentation. It has an effectively tragic story and a final scene that I would count among the more intense endings of any film from this year or the last.