Abuse in the Music Industry 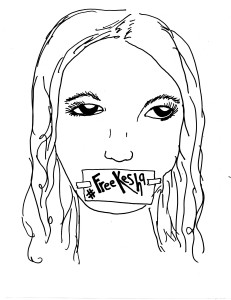 On Feb. 19, 2016, Kesha Rose Sebert lost her lawsuit against her producer Lukasz Gottwald — who produces under the name “Dr. Luke” — with the court stating that she must continue her contract under Sony, and produce six more albums, according to NY Daily News.

The artist found her fame with hits like “Tik Tok” in 2009, quickly becoming a name many were talking about. Since her fifteen minutes of fame, the singer seems to have disappeared, and her EP Deconstructed, released at the end of 2012, was the last bit of new music her fans have heard. Her short-lived reality TV show My Crazy Beautiful Life, ended in 2013.

Since October of 2014, Kesha has been battling an intense lawsuit against Dr. Luke. According to the transcript from the suit, the producer convinced her to move from her hometown of Nashville, Tennessee to Los Angeles with sugar-coated promises of the better life she would lead. The past 10 years Kesha has served under Dr. Luke’s contract has led her to file a multitude of different claims against her producer, with the major ones including sexual assault and battery, sexual harassment, gender violence and civil harassment. The case details accounts of Dr. Luke repeatedly drugging the singer, making numerous sexual advances — including raping her while she was unconscious — and relentless insults from the producer. Words like: “You are not that pretty, you are not that talented, you are just lucky to have me,” “There are a million other girls out there like you” and even referring to her as a “fat fucking fridge,” are some of the verbal attacks listed on the transcript.

The abuse didn’t stop there, Dr. Luke reportedly also threatened Kesha’s family and career if she spoke of the abuse or attempted to break her contract with him. Kesha’s case claims that he also threatened the physical safety of her and her family, and that the singer fully believed that he was capable of carrying out those threats. According to the lawsuit, this abuse is what caused Kesha’s bout with bulimia, and sent her to rehab in early 2014.

In retaliation to the claims made against him in Kesha’s suit, Dr. Luke filed his own lawsuit against the singer and her mother Pebe, charging defamation and breach of contract. He states that the accusations made against him, whether they involved the singer or not, are false, and that these false statements have been released by Kesha and Pebe to third parties; Dr. Luke claims that the only reason for Kesha’s lawsuit is to break the contract she has with him.

This is not the first lawsuit that seems to allow a celebrity to get away with sexual assault. On June 5, 2002, MTV reported that R. Kelly was arrested on 21 counts of child pornography, as a 27-minute tape surfaced in Chicago of him engaging in sexual acts with four different women — one of them supposedly a minor at the time. Seven of those charges were eventually dropped, and in his hearing in 2008, Time reports that he was found not guilty of the 14 other counts against him. Interviews with the jurors revealed that the likely reason that Kelly was not convicted was that neither the supposed minor nor her parents were called to testify if it was actually her in the tape; the reasoning was that they didn’t want to subject her to “unnecessary stress,” and she’d denied the claims shortly after the charges were made.

Singer Cee Lo Green was another man in the music industry who had been accused of sexual assault. KTLA reported that a woman came forward claiming that in 2012 Green slipped her some ecstasy, and then raped her when she was unconscious. The court ruled that there was not enough evidence to justify a rape case, so they only charged him with possession of ecstasy. NY Daily News reported that he was sentenced to three years probation, along with either Alcoholics Anonymous or Narcotics Anonymous sessions and 360 hours of community service.

According to Billboard, the problem is that previous cases leading to break of contract haven’t stemmed from charges of physical abuse. The reservation is that this case could’ve been a series of false accusations — and it wouldn’t be the first of its kind.

According to TimeX-Men, was accused of forcing a 17-year-old boy to perform sexual acts with the promise of an acting career. The lawsuit was withdrawn a few years later, and the NY Daily News reported that Michael Egan III — the man who claimed to be the victim of the assault — was pleading guilty for investment fraud. Egan used false claims to receive money from investors that he used for personal reason, making his suit against Singer look like a cry for money.

Manhattan Supreme Court Justice Shirley Kornreich declared that allowing Kesha to break from her contract would harm Sony’s reputation, NY Daily News reports. The judge also said that the court didn’t have the ability to break such contracts, as it would damage the laws of the state regarding contracts. Sony offered to let her work with another one of their producers, but the artist’s fear is that her music will not be as well promoted, as Dr. Luke is their largest producer.

The response to Kesha’s denial has been overwhelming. Many other celebrities, such as Lady Gaga, Tyler Oakley, and Kelly Clarkson — who has previously worked with Dr. Luke — have tweeted out their support to Kesha; Buzzfeed also has shown tweets from numerous other celebrities who wish the best for her. Hashtags such as #FreeKesha have also been trending all over the internet, and a man named Brandon de la Cruz started a GoFundMe page to buy Kesha’s contract from Sony; over 11 thousand dollars has been raised in two days, with over 800 donors.

A Tumblr post originally posted before the trial by user iiswhoiis shows the singer singing “Amazing Grace.” The caption called for those in the New York City area to meet outside the New York Supreme Courthouse, supporting for her to be freed from her contract. The group of supporters was originally supposed to meet on January 26, but the date was moved because of the weather.

Due to the support from both fans and other celebrities, Dr. Luke’s team released a press statement on February 22 in response to the hashtag #FreeKesha. The statement declared that the court ruled that Kesha was free to produce music with other producers and that “Any claim that she isn’t “free” is a myth.” They also deny that any abuse happened to the singer, stating “the Court also noted multiple times that her vague abuse allegations were devoid of factual detail, and that there was no evidence, whether from doctors or anyone else, to support them.” They are still standing behind the idea that Kesha’s claims of rape are “outright lies.” All of this was reported by Billboard.

This long and lengthy battle between the two is likely nowhere near its end, as many seem to be displeased with the result of the trial. The fate of Kesha’s career is still unclear, and only time will tell where this ruling will take her.

Sara Belcher is a freshman journalism major who thinks people should stop boycotting Beyoncé and start boycotting Sony. You can email her at sbelcher@ithaca.edu.