RAW FROM THE SAW: Art Angels 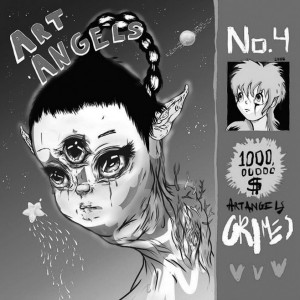 After Visions was released in 2012, Grimes’s otherwise radio silence built up suspense of her next album. When Claire Boucher released “Go” with Blood Diamonds, some fans of the cyclical hum of Visions were thrown in a loop because of its more radio-friendly function. Just a year later, electro-pop artist under the pseudonym Grimes, released her fourth LP Art Angels as a bigger step in the pop direction, leaving behind the construct of Grimes a la previous work.

Art Angels opens like a cosmic movie score with “laughing and not being normal,” while not denying the familiarity of the signature synthesizers. Though admittedly softer than the opening beats of Visions, the texture gains a thicker, dramatic buzz after Grimes’s floaty lyrics and leads into the perhaps most catchy track on the album, “California.”

“California” contrastingly provides a level of clarity. The familiar electric buzz retracts into the background and instead the vocals are featured as in any pop song, repetitive and layered with harmony. The sample of Rihanna’s “Pon De Replay” supports the pop intention and also perhaps unintentionally covers the pain within the lyrics, “‘Cause I get carried away/ commodifying all the pain,” pre-packaged and uniform.

There are also not-so-subtle melancholic undertones in this album rather early on, contrasting the otherwise, at times deceptive, upbeat texture.

“Flesh Without Blood” is another example of how this Art Angels is purposely not made out to be akin to Visions, a response to some backlash from the pop-like quality of “Go” in 2014. Though fan reaction is important to an artist, Grimes, like any artist, will produce the music that she feels compelled to produce, admitting that “It’s nice that you say you like me/ But only conditionally.”

“Kill V. Maim” takes on the aesthetic of album cover, an anime-inspired battle song that melts into the electronic texture to where it’s almost discernable. But the slightly sarcastic, cheerleader “B-E-H-A-V-E/ arrest us” chorus, reinforces the rather hidden antagonism of her other tracks like “Flesh Without Blood.”

“Venus Fly,” features Janelle Monáe and like “Kill V. Maim,” uses femininity as a weapon in a fantastical setting, however translatable to actual reality, a theme of the album. “Wrap my curls all around the world/ throw my pearls all across the floor/ feeling my beat like a sniper girl,” playful, sarcastic humor that is paired with aggressive power.

The cover art is accompanied by other artwork that goes with specific songs on the album. Similar to the cover art, the art for “Venus Fly,” the second collaboration on the album, has aspects of femininity that are masked by an alien edge and the gore of blood spurting from multiple places, be it skin or simply a more metaphoric armor.

Art Angels could be a concept album if it wasn’t so real-life. Grimes very candidly breaks out of the box she was put in post-Visions and proudly expresses her truth with more pop than before, but not without giving up her signature synthesized style.