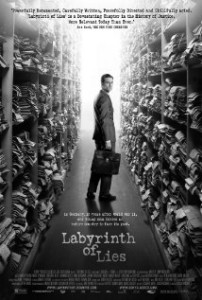 In 1978, Alan Pakula’s All the President’s Men transcended the standard political thriller by using its story to discuss deeper themes and capture the paranoia of a time when not even the leader of the free world could be trusted.

Labyrinth of Lies, Germany’s submission for the Academy Award for Best Foreign Language Film, is a political drama/thriller that accomplishes much the same feat as All the President’s Men.

The story is set in Germany, 15 years removed from World War II, where ambitious prosecutor Johann Radmann (Alexander Fehling) works mostly with traffic cases. One day, Johann is confronted with a report from a journalist (André Szymanski) about a former Nazi working as a public school teacher.

The German government had largely covered up the activities that went on at the concentration camps. Johann’s boss, prosecutor-general Fritz Bauer (the late, great Gert Voss), puts Johann in charge of investigating former Auschwitz workers. Johann’s investigation questions how many Germans’ fathers have blood on their hands; it shakes the country to its core at a time of economic prosperity. Many that believe Johann is asking questions better left unanswered.

Labyrinth of Lies is an exceptional piece of political filmmaking. It treats its subjects with respect. When a former Auschwitz prisoner removes his eyepatch for Johann, the audience is never shown what the patch was covering. When the man tells his story, the audience doesn’t hear it. Often, the stories are told in more human ways; the viewers witness the characters react to the horrors second-hand. Labyrinth of Lies makes us all subject to the gruesomeness, the inhumanities, committed at Auschwitz with the unflinching, yet tortured reserve of Johann staring down the survivors with an unconditional respect and an unspoken agreement to bring the monsters responsible to trial.

Such a dedication to articulating the stories of its subjects is best shown in Simon Kirsch (Johannes Krisch), a friend of the journalist’s, who met Dr. Mengele face-to-face. His testimony to Johann and the journalist is heartbreaking. Krisch relives all of the pain of his character in that moment, delivering an unforgettable, tragic performance.

Johann’s love interest Marlene (Friederike Becht) is an aspiring dressmaker with lovely deep, brown eyes and an air about her that she’s smarter than people think. A scene toward the end of the film between her and Johann at Marlene’s dress shop is a great show of excellent writing and subtle acting.

Yet, the film would have been more impactful if it were more subtle, more reserved. As it stands, Labyrinth of Lies features a wealth of emotional performances and powerful storytelling, and stands among the best investigative dramas of recent years, but it’s also one of the most “Hollywood” films I’d ever seen produced outside of America. The performances got a little too over-the-top and the story became a little too streamlined at times, especially in the film’s concentration on Dr. Mengele. Instead of a more focused, smarter drama about people’s experiences in a country they’re not sure they know anymore, the film changes on a dime into a race-against-time story that just doesn’t suit the subject matter. The plot even hits the clichéd beats of typical investigative journalism films, even the part where the hero decides to leave the case, but something inside him just won’t let him stay away.

Some scenes echo ones from recent historical dramas such as The Imitation Game or, of course, All the President’s Men. But it’s all at the service of some great storytelling, and these are stories that truly need to be told.