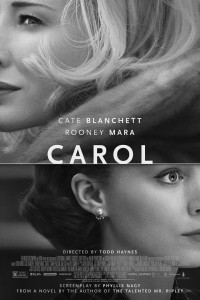 Carol is a film about gestures. It’s about lingering stares, gentle touches, brief moments, all of which come together to tell the story of an affair between a middle-aged woman and a young shop girl. The film is a treatise on loneliness and ennui, on being an outsider in a world that openly condemns your kind. But it is also an enigma, purposely cold and distant to the viewer, as if the film were a beautiful mural put behind thick glass. Carol, directed by Todd Haynes and written by Phyllis Nagy, is calculated and deliberate, qualities that may put off audiences who are expecting a tearful romance between two clandestine lovers, but as the film continues, its seemingly impenetrable façade breaks down to reveal the warmest of hearts.

The story follows Therese, played by Rooney Mara, as she meets — and falls in love with — the titular Carol, as performed by Cate Blanchett. Simply put, this is the role Blanchett was born to play. With her old-school movie star looks and her always-on-the-verge-of-breaking demeanor, she is able to capture the essence of Carol, a woman who must be endlessly desirable and hopelessly lost all at once. As her soon-to-be-ex-husband Harge (Kyle Chandler) tells her, Carol is always “the most beautiful girl in the room.”

Blanchett provides the film with its impetus, but Carol is really Therese’s story. As the young lover, Rooney Mara puts in perhaps the finest performance of 2015. It all comes down to her eyes; wide and naïve at the beginning, hurt and just a bit more experienced by the end. Therese is a character that Mara defines more through stolen glances than bombastic monologues. A character this repressed should not feel so intimate and exposed. She’s like an Edward Hopper painting: beautiful, delicate, removed, alone.

Todd Haynes and cinematographer Edward Lachman carefully construct the film mostly through close-ups. It is not a flashy movie but rather closer to the restrained efficiency of Classic Hollywood (one can imagine an alternate reality where Billy Wilder or Douglas Sirk directs Carol). Where the film shines visually is in its use of color: muted reds, gunmetal greys and misty greens light up every scene. The juxtaposition between the lavish art design and the constrained characters creates a story told not just through dialogue and action but in color too. Towards the end of the film Therese paints her ugly beige-ish pink walls a beautiful fresh mint green, signaling a change in her own psyche. These moments of visual harmony are present in almost every film, and it is just one of many reasons why the story of Carol resonates so clearly.

Films like Carol aren’t common. Todd Haynes’ masterpiece is the rare movie to offer a deep reserve of textual symbolism while simultaneously operating on an ethereal level that requires nothing but the viewer’s interest. The key difference between Carol and many other, perhaps gaudier films can be encapsulated in a quick scene: when Carol looks at Therese, the two women surrounded by strangers, and smiles. In any other movie, this scene would be adorned with unnecessary exposition or an inflated expression of love. In Carol, Haynes understands that it is not the large gestures that stick in our memories but the small ones. The squeeze of a shoulder, the quickening of one’s breath, the smile of a lost lover in a crowded room. Passion is found in these moments, and no film of 2015 is more passionate than Carol.