Home MagazineNews & Views Going Out On Their Own Terms
News & ViewsObsessed

The increasing support for the Death with Dignity movement

Earlier this November, Dr. Peter Rasmussen died peacefully after receiving medication from his doctor, surrounded by his family. Rasmussen was an oncologist who had been diagnosed with a malignant brain tumor in 2014. The doctor had also been a lifelong supporter of the Death with Dignity movement.

According to the Death With Dignity National Center’s website, DWD laws allow certain terminally-ill adults to voluntarily request and receive a prescription medication so they can die in a peaceful, humane manner in a place and time of their choosing.

Rasmussen is just one of the growing number of people choosing DWD treatment. According to statistics from the Oregon government, the number of people being prescribed DWD medication has risen from 39 in 2000 to 155 in 2014. 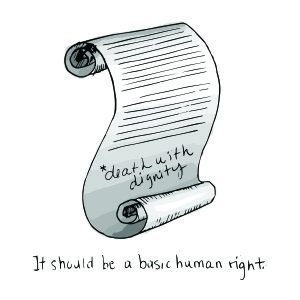 “Medical improvements have allowed us to keep people alive, but those people may find that they have lost their autonomy and dignity,” he said.

In addition, back in February, New York State lawmakers proposed two DWD bills, one of which is the “New York End of Life Options Act,” which if passed would make New York the seventh state to allow DWD.

New York State Sen. Diane Savino, a democrat, commented to MSNBC regarding the law: “The option to end one’s suffering when facing the final stages of a terminal illness should be a basic human right.”

Timothy Quill, a professor of Medicine, Psychiatry, and Medical Humanities at the University of Rochester Medical Center, as well as the main plaintiff in one of the biggest death with dignity related cases to reach the Supreme Court, said that legalizing DWD laws on a state level is the best way to implement them.

“Probably now the best approach is state-by-state,” he said. “This allows for incremental data collection and does not get the movement too far ahead of the general need for a better system.”

However, Leven said DWD should be a constitutional right, as well as a human right.

The act allows terminally ill patients to hasten death under strict regulations from their doctors. These regulations include two witnesses to the request — one of which cannot have a stake in the recipient’s estate post-mortem — and a declaration that the patient is free from any mental conditions inhibiting judgement.

Quill said death with dignity is about ending the patient’s pain.

“The possibility of physician aid in dying has to do with relieving suffering in patients who are dying, which is clearly within a doctor’s role,” he said.

Following the Oregon DWD law, a number of related support groups within the Death With Dignity National Center flourished, including the Oregon Death with Dignity Legal Defense and Education Center as well as the Right to Die Political Action Committee. Although there were numerous attempts made to revoke the law — stemming from religious and moral opposition — these efforts were not successful.

This “right-to-die,” as DWD is often referred to, is still a heavily weighted topic. Religious groups and doctors alike still question the morality of aiding in the death of another human.
A big argument being made against DWD is the scenario that individuals with depression or other mental illnesses will not be properly screened when patients are looking to end their own lives, or that people may act too soon in regards to their health. However, as the law currently stands in Oregon, only those that have been diagnosed with six months or less to live are allowed to pursue DWD.

“Doctors do not want to lose their patient,” Leven said. “We allow people to end their suffering by having their means of life removed after it has been deemed necessary. When it has been determined that a person can no longer function as a regular human being we take out their feeding tube … this is no different.”

When questioned on the morality of DWD, Dr. Robert Milch, the founder and medical director of a hospice in Buffalo, New York, wrote that DWD is consistent with the principles of being a doctor.

“Many confuse healing with curing, which we [doctors] do frequently,” he wrote. “With the aid of a physician who remains engaged with his/her patient and caregivers throughout the course of illness, addresses realistic goals and helps craft a plan of care consistent with the patient’s goals and values, people can die healed.”

In regards to questions about mental health and DWD, it is as tough to gauge the effects of depression and anxiety on a person’s decision of this nature as it is to even successfully recognize mental illness in a person. Whatever the case may be, patients must be deemed mentally competent by at least two physicians before their request is taken into consideration. And the decision to end one’s life is anything but quick.

“These decisions made by patients are in no way impulsive,” Leven said. “The average time between when a patient first requests the medication and takes it is around 47 days. These decisions are made thoughtfully with the full support of their loved ones.”

Another point made against DWD in the same vein is that the idea of making suicide more socially acceptable will lead to a higher suicide rate and urge those who may only suffer from a disability to end their lives. The Catholic News Agency wrote in an article from 2015 titled “Nine Reasons to Oppose Death With Dignity Laws” that “Disability rights groups are opposed to ‘death with dignity’ bills. They say it discriminates against the disabled and could lead to pressure on them to end their own lives.”

However, a study done by Aaron Kheriaty, a Christian Ethicist and an opponent of DWD, found there was a slight increase in the suicide rate of 1.6 percent after DWD laws had been enacted, but found that increase to be negligible.

Milch wrote that DWD does not lead to risks of more people hurting themselves.

“PAD [Physician Aid in Dying] creates nothing of a social threat,” he wrote. “As the experiences in Washington and Oregon show, it is not the beginning of a slippery slope or an indication that the sky is falling. If anything it reiterates the sanctity of the doctor-patient relationship.”

And as put by Mark Stern in an article from Slate, “Death with dignity laws do one thing, and one thing only: give terminally ill patients the choice to end their lives comfortably, rather than prolonging their suffering.”

Death with Dignity has a long way to come before it is accepted nationally, but the work being done by New York lawmakers and organizations across the country is creating interest. While opponents of DWD have questioned the impacts of such laws on sick or suffering people, supporters of DWD believe that the power of life should be in the hands of the patients, but in a way that a well-thought and educated decision will be made.

Dr. Rasmussen spoke on the topic after he was diagnosed with his brain tumor.

“We all realize we are going to die, and the dying part … is often relatively simple and reasonably comfortable, but it is getting there that can be kind of miserable,” he said.

Ben Kaplan is a freshman journalism major. You can email him at bkaplan@ithaca.edu.