You’ve probably heard it from the mountaintop already: Hillary Clinton won the Democratic debate hosted by CNN on Oct. 13. She stood poised and passionate, ready to appeal to the throngs of liberals and progressives who make up the mainstay of the primary voters.

You’ve heard how Bernie Sanders allowed the rope of populist rage to slip through his fingers and how Jim Webb said he totally killed a dude. And by now you’ve probably heard how Donald Trump screamed into the oblivion of the internet to make people listen to him as he bizarrely belittled the Democratic candidates.

By now the narrative of the debate has been set. But is this narrative the most accurate? Is it the most truthful? Well, like most stories concocted by the mainstream media, it’s reductive and not very telling.

Hillary definitely performed well, but she wasn’t challenged greatly in any way. Foreign policy was a major point on the agenda, an obvious soft ball for the former Secretary of State. Even better, no one challenged her spotty record of flip-flopping on supporting or condemning collapsing dictatorial regimes during the Arab Spring — such as the regime of Hosni Mubarak in Egypt or the Bashar al-Assad government in Syria — or her mismanagement of the Benghazi boondoggle or even her response to the torrent of State Department documents released by whistleblower Edward Snowden and Wikileaks. 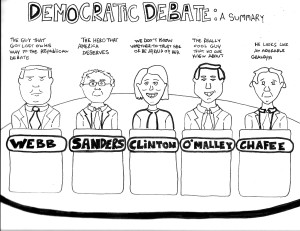 Clinton’s initial support of the war in Iraq turned into a chaotic shouting match with Sanders and Martin O’Malley, the former governor of Maryland and former mayor of Baltimore. The most offensive claim of the night she made was a defense of her handling of the Libyan Civil War, which she spun as a great liberation of an enslaved nation, but actually resulted in the decimation of the Libyan state into a chaotic mess that couldn’t be considered a “free” nation no matter how many quotations you use. However, no one called her out on it, and assumed because President Barack Obama entrusted her with the keys of U.S. foreign policy, she had to be right.

When questioned on climate change, she fell back on her experience as Secretary of State, highlighting her coercing of the Chinese to sign international emissions agreements. However, once again, her response was as empty as it was unchallenged. The administration of President Bill Clinton signed off on the Kyoto Protocol, but made little effort to pass it through the Senate, meaning the U.S. effectively didn’t partake in one of the most important international climate agreements in history. As Secretary of State, Hillary never took up the mantel of that agreement. In addition, her years as a senator from New York have been equally dismal in terms of introducing climate legislation or regulation.

Vermont Sen. Sanders, the radical Occupy favorite, floundered early in the debate as he struggled to establish a clear foreign policy identity. Instead, he hid behind the long pulverized horse of Iraq, using it to attack Clinton, instead of going after her many other identified areas of weakness such as Benghazi or the email scandal.

His position on gun control was as awkwardly represented as it was awkwardly attacked. Clinton and O’Malley — the mayor from the television show The Wire — claimed Sanders supported big guns and the National Rifle Association, which is as false as O’Malley’s claim to be a long time supporter of criminal justice reform as mayor of Baltimore.

After moving past the issues of gun control and foreign policy, Sanders’s angry populistic rage was on full display later in the night as he railed against the big banks, 1 percenters and people who keep talking about Clinton’s emails. Many news organizations like CNN and The New York Times have called Sanders defense of Clinton a bad move. But he just looked like an upright guy by defending her as he never advanced the typical fearmongering and Hillary bashing related to the scandal.

O’Malley came across as your southern uncle. He had a depressingly bizarre anecdote for nearly every question asked. His obsession with dying or dead children throughout the night came off as awkward as it was inappropriate. Throughout the debate, he kept working toward proving his “progressive” credentials, but both Clinton and Sanders have the bona-fides and reputation to claim that group, so working toward making inroads is as fruitless as it is disingenuous. O’Malley kept harking back to his time as a governor, but governing the entire U.S. is miles away from governing Maryland.

Former Sen. Webb wouldn’t stop trying to gain the spotlight. One could see how being marginalized could get annoying, but that’s because he shouldn’t be running for president. Most of his responses were too wonky for the uninformed electorate and too odd for the informed.

His harping on China as the greatest national security threat to the U.S. calls back to the late 1940s and 1950s when China first went red and Congress tried to find someone to blame, tearing the State Department apart to find secret hidden communists. Given the recent visit by China’s president, Xi Jinping, Webb’s comments seemed a bit paranoid. Webb also droned on a lot about his military experience, especially how he killed a guy in ‘Nam and how he was Secretary of the Navy under Reagan that one time. However, on Oct. 20, he dropped out of the race as a result of the poor draw of his lethargic, self obsessed campaign. Some have been suggesting he is planning an independant run, which would probably be even worse than his campaign as a Democrat.

Finally, there was Lincoln Chafee, who seemed as confused as everyone else as to why he was at the debate. His early answers to questions about his time as a senator from Rhode Island and later Governor of the state built up his political experience. However, his explanation about voting for the repeal of the Glass-Steagall act in 1999 because his dad had died and he had just been sworn into the Senate eviscerated what little respect the crowd had for him. Along with his constant talk of “ending all the wars,” Chaffee will go down as one of the most perplexing candidates the party has ever had. His bizarre campaign finally came to a brutal end on Oct. 23 after weeks of harassment by comedians and the general public.

CNN’s Anderson Cooper served as the moderator for most of the debate, and he did a relatively good job. So long as that job didn’t require shutting down Clinton or forcing her to confine her answers to the time restraints. The loose timeframe for Clinton’s answers allowed her to ramble on about how “progressive” she is now. No, seriously guys, Hillary Clinton is super progressive now. She is also a person … like a real person.

The other three question askers (to say moderators would be too generous) asked a few questions mainly toward the end of the debate. It was depressingly fitting that Juan Carlos Lopez, the Latino “moderator” for CNN, only asked questions about immigration, while Don Lemon, the most incompetent “journalist” CNN has ever tried to make cool and also an African-American, asked questions (from social media so he couldn’t mess it up) about race relations and Black Lives Matter, which all the candidates enthusiastically embraced.

The “weirdest” part of the debate was the relative obsession with policy and political action that seemed to reverberate with each candidate’s answers, as opposed to the Republican debates, which have focused on Trump and Obama bashing. Each candidate declared large sweeping reforms in the style of Obama. The NRA would be taken down. The rich would be taken to task. The Republicans would be stopped. A lot of these appeals felt like a direct call to the progressive wing of the party that will turn out for the primaries. It is obvious that Sanders has pushed Clinton to the left in the primary, but the chance this new compassionate progressive Clinton will survive to the end of the campaign in November 2016 is unlikely as a candidate displaying progressivism is nearly unelectable.

The most glaring problem was the lack of Lawrence Lessig, a constitutional law professor at Harvard and a powerful activist who is running for the Democratic nomination to raise awareness for campaign finance reform. Lessig is currently one of the biggest campaign finance reform advocates around and he has built a career standing up to the giant of industry and politics. However, his absence, probably because of “poll numbers” is a travesty, and points to the modern spectacle that we have created around our elections.

Instead of trying to elect the person best suited for the job, we have fixated ourselves on these ever emerging dramas that unfold on the campaign trail and become visible at debates. Through this blindness, villains like Trump will continue to fester out of their outlandishness and publicity power. While the Democratic party worked its tail off to never seem to venture to that low of a parasitic dramaturgy that is now attached to elections, its marginalization of outside perspectives and building of Clinton as the coming king festered the seeds of the corruption of the democratic process.

Hale Douthit is a sophomore cinema and photography major who wishes he could just close his eyes and make all the stupid politicians go away. You can email him at hdouthit@ithaca.edu.