Home IssuesFree The Art of Being Offensive
FreeMinistry of Cool

The Art of Being Offensive

Struggle between freedom of speech and offending the public

On Dec. 5, 2014, a sculpture depicting a Ku Klux Klan member covered with newspaper cutouts of coverage of past racial tensions and violence appeared on the University of Iowa’s campus.

Within hours of the sculpture going up, and after an outcry from many students that the sculpture was racially insensitive, the UI decided to take the sculpture down. In a message to the campus community, the administration wrote the sculpture had no place on the college’s campus.

“The University of Iowa considers all forms of racism abhorrent and is deeply committed to the principles of inclusion and acceptance,” the university’s statement read. “There is no room for divisive, insensitive, and intolerant displays on this campus. The display was not approved by nor sanctioned by the university. The UI respects freedom of speech, but the university is also responsible for ensuring that public discourse is respectful and sensitive.” 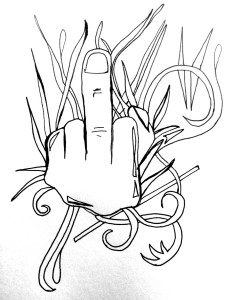 The artist who made the sculpture, Serhat Tanyolacar, a UI visiting professor and printmaking fellow, eventually apologized. Tanyolacar said it was not his intention for the sculpture to appear to be racist. He said he hoped the sculpture would raise awareness about the continued existence of racism and facilitate a dialogue on campus regarding issues of race.

However, in an interview via email, Tanyolacar wrote that while he understands why some felt the piece was offensive, he feels it served its intended purpose.

“I believe my piece at Pentacrest of Iowa City successfully triggered and opened multiple dialogues over different socio-political issues,” Tanyolacar wrote. “Yes, it has offended groups of students and it created a national controversy… this is the nature of subversive, public art work.”

Tanyolacar added that he does believe there is a place in society for offensive art and that it should not be removed, unless it advocates harm to others.

“No art, no ideology should be banned or taken down unless it promotes, dictates and orders direct physical violence, and in such a situation this entity, this creation cannot be defined as art,” Tanyolacar wrote.

Putting aside whether it was legal for the university to take down Tanyolacar’s art, a topic that has been hotly debated, another more important question emerges: Should they have taken down the sculpture?

Free expression is important, but so too is racial sensitivity, especially in a country many people seem to believe has moved beyond the racial tensions of the past. On the contrary, those racial problems are still very much present and ingrained in society.

Allowing racist art to be shown may undermine the very dialogues and awareness about racism that Tanyolacar wanted to start.
Art should be promoted as valuable in society, and free expression should be preserved whenever possible, but there are times when one can argue pieces of art should be taken down.

Take as an example Thailand’s bizarre fascination with imagery depicting Adolf Hitler. In a segment on the comedy show Last Week Tonight, the show’s host John Oliver explored how images of Hitler have appeared in Thailand on murals with superheroes, herbal laxative tea packages, chicken franchises, t-shirts and student artwork.

Extreme cases like this that celebrate and promote racist ideologies or extreme violence perpetrated against a group of individuals, or blatantly discriminates against a historically or currently oppressed group of people, are particularly contentious.

If art is not discriminatory in the ways already described, it certainly should not be taken down, and the value of free expression should be applied to pieces of art that generate other kinds of controversy. An example of this is a piece of art done by Steve Olson, a skateboarder and artist in California.

Olson’s piece displays the words “BUY SEXUAL,” with a backdrop of red with the number 69.99 plastered around the piece. Olson said the piece is a commentary on the idea that sex is something that sells.

“My piece, it really was about sexuality for capitalism or consumerism,” Olson said.

The artwork was displayed in the Santa Maria board hearing room, but was taken down in September of 2015 by Bob Nelson, chief of staff to 4th District Supervisor Peter Adam. Nelson said in an interview with a local newspaper that he found the artwork inappropriate for a government space. The artwork has since been put back up, although it was moved to a different location in the same building.

Art of this nature should never be taken down. It does not discriminate against anyone and is simply trying to make a point about society. The free expression of this kind of artwork should be protected from censorship.

Olson said the purpose of art is to prompt a reaction.

“Art is supposed to provoke feeling and make the person think, whatever way that is,” he said. “If the art does that, art does its job.”

Tun-Jen Chiang, a professor in the George Mason University School of Law and the co-author of a piece of writing about offensive art titled “Censorship versus Freedom of Expression in the Arts,” said he generally doesn’t believe that art some might find offensive should be taken down. He said one of the reasons for this is that society’s values of what is deemed offensive change over time.

“Today, pieces of art that would be considered blasphemous in previous societies are considered fairly benign to us,” Chiang said.

Chiang also weighed in on art that people find to be racist, sexist or otherwise offensive toward a discriminated group. He said even in these cases, he is not in favor of the art being taken down. Chiang said it’s difficult to assess the value of such art in society because of the passion controversies about offensive art generate.

“There is a value to having [offensive] art there so we can make a longer term assessment of its value once the controversy dies down,” Chiang said.

The answer to whether offensive art should be taken down or not lies in the middle of the two extremes of protecting art from any censorship and taking down art anyone finds offensive. Society must protect the expression of art while also keeping in mind the art’s impacts and connotation on oppressed groups.

Evan Popp is a sophomore journalism major who isn’t against drawing a few dicks on bathroom stalls. You can email him at epopp@ithaca.edu.