The widespread use of psychostimulant drugs, like Adderall to treat Attention Deficit Hyperactivity Disorder began in the early 1990s. This happened around the same time that the FDA first allowed for the advertising of controlled substances directly to consumers.

Since the 1990s, both the rate of psychostimulant prescription for ADHD as well as the diagnosis for ADHD have been on the rise. Diagnostic rates vary from state to state, but according to the Center for Disease Control, the general trend is upwards; with the rates among states such as Arkansas and Kentucky nearly doubling during the four year period from 2007 to 2011, while other states such as Alaska have flatlined.

Yet diagnostic rates may not be the best gauge for understanding just how common ADHD is.

According to a 2013 study published in the Contemporary Journal of Psychotherapy: “the national rate of ADHD diagnosis exceeds all reasonable estimates of the disorders’ true prevalence with 14% of children being diagnosed before adulthood.”

Indeed, a 2014 study in the international journal of epidemiology stated that there “has been no evidence to suggest an increase in the number of children in the community who meet criteria for ADHD when standardized diagnostic procedures are followed.”

The true prevalence of ADHD (or in layman’s terms: how many people actually have ADHD vs. how many people are diagnosed with it) is hard to pin down, yet with the American Psychiatric Association estimating this number at 5 percent, some worry ADHD may be over-diagnosed.

“I don’t think that the [true prevalence] rates of ADHD have gone up,” Dr. David O. Antonuccio, Professor Emeritus at University of Nevada School of Medicine said.

“Some would argue that our diagnostic systems are better, and somehow we are recognizing it [ADHD] more, but I don’t really think that’s the case. I think cultural and marketing factors are a bigger driver for the increase we have seen [in diagnostic rates].” 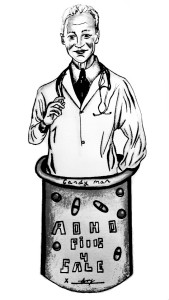 As rates of the ADHD diagnosis inflate, the widespread non-medical use of ADHD stimulants on college campuses poses an additional concern.

A 2000 study examining the recreational use of psychostimulants prescribed for ADHD published in the Journal of American College Health stated that over 16 percent of students surveyed had used methylphenidate [Ritalin] in a non medical setting, and 12.7 percent of students surveyed said that they had snorted the drug — a method of administration incredibly prone to abuse.

According to a 2013 article from The New York Times, nearly 14 million monthly prescriptions were written for Americans ages 20 to 39 in 2011. This is two and a half times the 5.6 million just four years before. This illustrates just how common prescriptions are. In fact, according to a 2011 study from the Center for Disease Control, roughly 70 to 80 percent of children with ADHD ages 14 to 17 were treated with such medications.

With approximately three quarters of Americans with ADHD being prescribed medication, prospective buyers would not have to scour the earth, much less their college campus, to find someone with a supply of legally prescribed stimulants. And with prescription rates on the rise, it is only getting easier to buy and sell.

“The stuff sells itself on college campuses,” said one anonymous source who reflected on using his Adderall prescription as a profit making venture while enrolled at a large public university.

“So every opportunity to sell it came quickly.”

The source stated that he would even, “forego [his] own need [for Adderall] to make sales.” He stated that “the money was both too good and too easy [to pass up].”

When asked why he felt his services were so popular he stated that it was about “the stress that the average student feels.”
He continued, stating he could not “imagine that college was so panic inducing in the past, and that people would so quickly reach for a chemical fix. It’s more than just over-prescription, it’s also about cultural awareness and demand.”

The claim that college students like to use adderall to study is not entirely without merit. A 2013 study from the journal of Drugs: Education, Prevention and Policy, found a 35 percent rate of illicit psychostimulant use at one large public university.
If these rates of illicit stimulants used are anywhere near accurate, than the issue of prescription drug abuse has a significant presence on U.S. college campuses.

While a common sentiment in colleges is that ADHD drugs make you smarter or work better, this likely is not the case.

“To the contrary, compelling new evidence indicates that ADHD drug treatment is associated with deterioration in academic and social-emotional functioning,” said a recent study from the University of Nevada, Reno.

Drugs such as Adderall and Ritalin are not only addictive, but non-prescribed possession and distribution of them are both highly illegal, with the DEA classifying them as Schedule II drugs or “drugs with a high potential for abuse… with use potentially leading to severe psychological or physical dependence.”

When used irresponsibly, drugs such as Adderall and Ritalin have the potential to cause serious harm.

“Most people can walk away from drug use, but some don’t and get into serious trouble,” said Michael J. Kuhar, professor of neuropharmacology at Emory University.

“So some people have a vulnerability for being addicted, which is complex and you can’t predict with certainty who will be an addict,” Kuhar said. But addiction clearly happens, so every person who uses adderall without medical supervision needs to consider that he/she could become an addict.”

Psychostimulants are not without their uses, yet the question about whether the risks outweigh the rewards is still highly circumstantial.

Adderall has only been in popular use for about 20 years — a relatively short period of time for an addictive drug with potential side effects including psychosis and sudden death.

And misinformation is all too common; in fact, The New York Times states that every major ADHD drug company has been cited by the FDA for false and misleading advertising.

Additionally, a 2010 study titled “Adderall is Defintely Not a Drug,” conducted by the University of Kentucky, found that students tend to “frame stimulant use as both physically harmless and morally acceptable.” Business Insider stated that only 2 percent of the respondents of this study thought stimulant use was dangerous.

With 35 percent of college students essentially using speed to study and only 2 percent seeing this drug, which is neither associated with improved grades nor cognitive ability, as dangerous, it would appear that our thoughts about prescription stimulant use are more grounded in marketing than science.

As Dr. Conners, a psychologist and professor emeritus at Duke University said, “The numbers [surrounding ADHD] make it look like an epidemic. Well, it’s not. It’s preposterous. This is a concoction to justify the giving out of medication at unprecedented and unjustifiable levels.”

Matthew Nitzberg is a junior sociology major who thinks the war on drugs is rhetorical bullshit. You can email him at mnitzberg@ithaca.edu.