The resurgence of vinyl in the 21st century 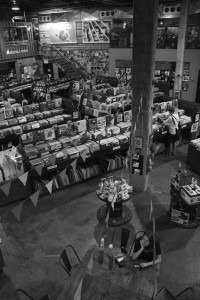 The regurgitation of generational cultures has become a staple of our society, this being obviously seen within the revival of vinyl records. Though vinyl records were once a major source of a musical reproduction method, and a listening tool, this slowly declined in the ‘80s and ‘90s as compact discs and cassettes took over mainstream culture as presumably better media for listening to albums.

CDs and cassette tapes provided a more compact and portable way to listen to music. Now in the 21st century with way more advanced technological developments, access to music is overwhelmingly easy. Over the past couple of years there has been a sort of revival of the old tool of listening to music — a vinyl revival. Not only is this “bringing back” of old cultural tools important in how we incorporate past generations within our society, but it also allows us to appreciate the past — taking a musical walk down memory lane, and experiencing music the way our parents and past generations did.

In the 21st century this concept is prevalent in media such as music, art, clothing, and in alternative culture. Some decades which encompass present day culture are revivals of ‘70s and more recently ‘90s culture. With this idea it is clear why there has been a revival and new-found appreciation for vinyl records.

Not only has there been a rise in vinyl from places like thrift and record stores, but also at popular stores such as Urban Outfitters where up-to-date pop music combined with past music such as Nirvana and the Beatles can be found.

So why go out and buy a record player and vinyl? A reasonable question to ask, as it would be much easier to just open up a MacBook and look up a YouTube video, or play Spotify. However, some appreciate this revival, because it potentially resets music to its purest form. Possibly even a form in which music was intended to be listened to.

Adam Gonsalves, owner and operator of Portland’s Telegraph Mastering, a full service audio mastering studio, was quoted in The Oregonian, “I think this is what people like about it: it pins very closely to the way that human beings hear music organically.”

This can be shown as possibly the most important aspect of vinyl records. With this revival, music can once again become a more physical experience, developing a way of tapping into past cultures integrated into the 21st century.

The physical process of picking out a record, taking it out of its slipcover, placing it onto the player, and putting the needle down. There is no comparison to this physically mesmerizing experience that directly connects listeners to the music when compared to throwing on some headphones and putting on a random Pandora playlist. This is maybe why vinyl revival, and generational revival is so important in our culture, to allow us in such a fast-paced, technologically advanced world, to sit back for a minute and remember what a physical music experience is like.

Not only do records connect our culture with the past, some admit that vinyl records produce better sound quality as opposed to other musical listening tools. Oftentimes sound quality can become diminished by things like file transferring. Caso said that this is one of the many reasons why individuals stay loyal to vinyl. While there can be some downsides to listening to vinyl like problems with high pitched frequencies, or surface noises due to the way the records are manufactured, this adds to the organic sound experience that so many vinyl lovers identify with.

Caso said that in Angry Mom Records, some of the most common, or popular records being purchased recently are classic. Among many others, people seem to be buying a lot of Led Zeppelin, Frank Sinatra and Bruce Springsteen. There has been an overall consumer surge in classic rock record sales. The most popular season for record purchasing seems to be in the summer, when students flee back to school looking for a new oldies, classic rock hit to jam out to before classes begin.

While vinyl records seem to be reaching some sort of a cultural peak, Caso said he believes that every so often people tend to look back at past generations, and bring back what was once old into the new generation. Although records are seen as a past standard for a music listening device, it seems that they will live on in our ever-changing, technological world

Shannah Sacco is a junior politics major who is thinking about getting into wax cylinder recordings. You can email her at ssacco1@ithaca.edu.