RAW FROM THE SAW: Yours, Dreamily 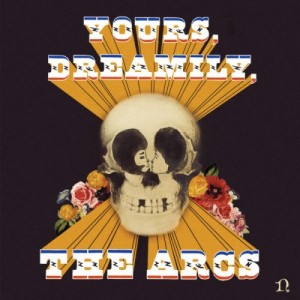 Part garage-rock, part psychedelic, part R&B and part concept album, Yours, Dreamily by The Arcs is the kind of album that looks like a disaster on paper but works in practice. Yours, Dreamily is exactly what the name suggests. It sounds like the feeling of flipping through a vintage photo album: nostalgic, romantic, melancholic, soulful and dreamy.

The Black Keys’ Dan Auerbach proved that he plays well with others in the debut album of The Arcs, a supergroup made up of Auerbach, Leon Michels, Richard Swift, Homer Steinweiss and Nick Movshon. The band also features guitarist Kenny Vaughan and Mariachi Flor de Toloache, an all female mariachi band from New York.

Even though Auerbach said in a Rolling Stone interview that the band is completely collaborative in nature, most of the songs, especially in the first half of the album, defiantly sound like they could have come off a Black Keys’ record and are more Auerbach-oriented. However, they are less bluesy than classic Black Keys’ songs and are a bit more psychedelic.

The first half of the album also happens to be the hardest hitting, with driving beats and grungy-bluesy guitar. Songs like “The Arc” are some of the album’s best, which have moments that sound like “Gold on The Ceiling,” “Outta my mind” and “Put a Flower in Your Pocket.” What makes this album stand out, however, is when it strays from the expected Auerbach-oriented songs. The use of piano and saxophone mesh surprisingly well with Auerbach’s grimy guitar and whiny falsetto. Songs on the second half of the album begin to wander into the realm of seductive R&B. Songs like “Nature’s Child,” “Come & Go” and “Everything You Do (You Do For You)” sound like they come straight out of a speakeasy/jazz club.

The album ends softly and sweetly with the song “Searching the Blue,” a slow ballad with a steady beat and a mellow, tinkly piano. This song sounds like Auerbach is putting listeners to bed after a long day of play. The simple, but catchy melody is tinged with sadness as Auerbach croons, “War is over now/ I feel my mind returning.”

While it would have been nice to see some cohesiveness in the album, it rather shows the breadth of the group. In the future, it would be nice to see other personalities of the group shine a bit more, but overall this album is well worth a listen. It gives Black Keys fans something while also letting Auerbach explore and create great music with other talented musicians in a well-produced album.