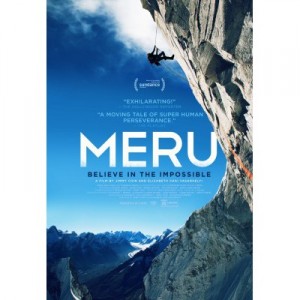 Jimmy Chin’s newest film, Meru, is enthralling, heart-wrenching and captivating from beginning to end. Co-directed with his wife, Elizabeth Chai Vasarhelyi, the feature documentary follows Chin and fellow elite climbers Conrad Anker and Renan Ozturk (also a cinematographer for the film) as they attempt to successfully climb what is known as the Shark’s Fin of Mount Meru. The film depicts intimate interviews with the climbers, their families and experts on the sport, as well as thrilling shots of the heartache, difficulties and ultimate realities of climbing.

Chin’s plan to summit Meru initiated in 2008 when he, Anker and Ozturk began to climb the claimed-to-be-impossible Mount Meru. The film shows footage of the failed first attempt due to low food rations, freezing weather and a storm that set them back in their plans for four days. After the brutal defeat, the climbers return home and are convinced that Meru is out of the question even for the most elite climbers. However, when the three of them endured life-changing experiences, the trio made the decision to attempt Meru a second time three years later in 2011.

While the action shots are what gives the film its exciting edge, the up-close interviews create a connection with the climbers as they share their life stories, their reasons for making the beyond dangerous trek and why it is worth the deadly risk. These interviews also reveal the danger and stakes for attempting Meru and the Shark’s Fin. Jon Krakauer, author of the book Into Thin Air said in the film, “This is the test of the master climber,” as it is more difficult than even Mount Everest, which Chin and Anker have climbed at least four times.

The anxious and breathtaking sensation while seeing these men take a climb into what to them is the unknown is thrilling. However, another significant aspect seen throughout Meru is its ability to depict the relationships developed and their importance when taking the risk that is mountain climbing. Chin did an impeccable job of capturing the deep-rooted feelings that he and his co-climbers had toward each other and the mountain. It seemed as though he and his crew filmed absolutely everything in order to make emotion come to life on screen — which he was successful in doing.

The motion picture was thrilling and captivating from start to finish by its cinematography, style and overall message. Meru shows climbing as not a hobby or activity, but a life-changing sport that holds intense consequences and rewards — something that, as Ozturk claims in the film, “…Was worth the risk. It was worth possibly dying for.”