RAW FROM THE SAW: Grooms 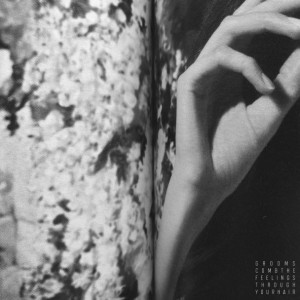 With each new album, the sound of Grooms grows more refined. With its fourth studio album, Comb the Feelings Through Your Hair, they’ve taken the instrumentation of their typical psychedelic rock and melded it into a smooth cloud, pumping with a steady-stinging drum, blurring where the guitar ends and the keys begin. Voice becomes just another instrument with the repeated use of Oh’s and Ooo’s to build the wash of sound backing each track. What was formerly a wash of similar jagged timbres creating tension, has been polished into a well-blended wall of pastels. Grooms retained a lot of the dissonance its fans are used to, with the same slightly rusty vocals jumping in and out of the foreground.

The album opens with one of its best tracks, “Bed Vision.” The first sound is that of dirty bubbles boiling or a squeaky shoe swishing down a hallway, wobbling into the song. Sleigh bells building into a squeaky, clean forest of sounds shortly join it. An echo-y male vocal enters the song from a distance, remaining in the shadows, fading in and out as the song goes on. Something that sounds like a modest, possibly slightly muted flute, or almost like the whistling of a bird, swings through the background. The whole mixture flows into tainted calls as the song reaches its climax, before descending into echoing of a light chime-like instrument.

Jumping into the title track next, a new standard is set. No longer are the vocals massaged into the instrumentals nor the range of instrumentation so diverse. From here on out the lead vocals tend to keep the rough-edged sound fans of Grooms know so well. The guitars and keys and bass twirl away in a hypnotic trance broken only by the constant, restless rustling of drums.

As the album works its way onto “Cross Off” and “Something Wild” and carries on to the end with “Grenadine Scene from Inside” and “Foster Sister,” the drum builds slowly from track to track, demanding more attention, almost challenging the power of the vocals. As each song passes, they burst like a popped bubble with a second or two of silence, rather than fade into each other and blend like one endless medley.

The longest track, and one of the best, is “Doctor M.” With a rougher start of muted strings followed by a stinging riff on repeat, this track jumps from the gate with a dizzying speed. A demanding near chant, emphasized with a ghostly backing vocal, joins this edgy tone. Halfway through the song, the buzzing melody is disbanded and all that’s left are bursts of twinkling chords fading in and out of silence which melts into the chatter of a bustling restaurant or train station.

With sounds that could only be described as ripped from a strange dream, Grooms would work well mixed in with Tame Impala or Animal Collective. Comb the Feelings Through Your Hair is a mesmerizing cloud of sweet, shimmering sounds designed to keep minds spinning.