RAW FROM THE SAW: A Girls Walks Home Alone at Night 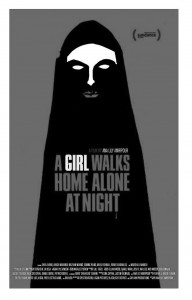 A Girl Walks Home Alone at Night opens up as any other Western stereotypically would: a black and white image with a large depth of field showing the barren landscape of the made-up Bad City in Iran. The camera slowly finds an attractive young man with cowboy boots, jeans, a tucked-in white t-shirt with slicked back hair, sunglasses on and a lit cigarette at his lips. From the opening scenes, no one would expect the film’s hero — or in this case, heroine — to be a man-eating vampiress.

Ana Lily Amirpour’s film presents a number of challenges to an American audience — it is completely in Farsi, with English subtitles — but it is so innovative that it’s hard to walk away from the theater without talking about it. Made in California, the 99 minute film is much more extraordinary than a typical thriller, horror movie, or feminist art work calling for social change.

The entire premise of the film is that the main character, a young Iranian woman, roams the streets of Bad City at night searching for misogynistic and otherwise “bad” boys or men to feast on. While in Iranian society it is typically considered dangerous for women or girls to be alone on the streets, Amirpour creates a female character who is not scared of the dark streets. Instead, she is the one who needs to be feared.

Amirpour showcases her exceptional knowledge of past Iranian art works and Western-style films in order to create a masterpiece that is a poignant representation of Iranian New Wave cinema. Unfortunately, her allusions are lost on a large number of audience members watching her work, unless they previously studied these genres on their own.

Although the eerie film looks at the young feminist vampire’s life within Bad City as she murders chauvinists, Amirpour also illuminates elements of the lives of secondary characters, namely her love interest from the opening scene, Arash. While working to support himself and his drugged-out father, he eventually meets the protagonist, who reluctantly lets him in. Not to say that their relationship is an easy one either; Arash soon finds out that the vampire killed his father as well.

A Girl Walks Home Alone at Night is a compelling piece, beautifully composed and structured. The young vampire, who remains silent for the majority of the film, lures the audience in with her mission to harm only the most misogynistic of the city. Just watch out boys, the next time you’re preying on an innocent female, another may just be waiting in the shadows to sink in her teeth.