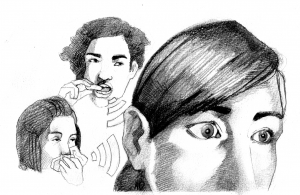 A look at misophonia and its implications

Most people are repulsed when they hear smacking noises from another person’s mouth or mildly annoyed when somebody taps their fingers on a desk. People diagnosed with misophonia, however, may become anxious or, in severe cases, fly into a rage. The definition of misophonia, or selective sound sensitivity syndrome, is a strong dislike or hatred of certain commonly occurring sounds, which trigger irrational and and extreme reactions, according to American neuroscientists Pawel and Margaret Jastreboff, who coined the term.

According to the Jastreboffs’ report titled “Treatments for Decreased Sound Tolerance (Hyperacusis and Misophonia),” misophonia is often triggered by specific sound set types. For example, there are oral sounds, such as chewing, yawning or whistling. Some people are triggered by breathing or nasal sounds, as in grunting, snorting or sneezing. Another set is vocal, such as bad singing or humming. Another possible trigger can be a small, repetitive visual motion such as someone jiggling his or her leg or fidgeting with his or her hands. An additional set is environmental, may it be a dog barking, dishes clattering or distant lawn mowers.

According to advocacy and support group Misophonia UK, people who have misophonia experience fight or flight symptoms. This is a response in humans that occurs in response to a perceived harmful event, attack or threat to survival, according to Harvard University physiologist Walter Cannon, who first developed the concept of fight or flight in 1915. Examples include sweating, muscle tension and quickened heartbeat. The over-activation of hormonal circuits may even cause unwanted sexual arousal.
Based on research by Miren

Edelstein, a PhD student at the University of California at San Diego who published an article on misophonia in the Frontiers in Human Neuroscience journal in June 2013, “the most commonly reported physical effects were pressure in the chest, arms, head or entire body as well as clenched, tightened and tense muscles.”

This lifelong condition usually starts between the ages of nine and 13 and is more common in females, according to WebMD. There have been outlier cases of the illness being reported as young as age two and during middle-age. The illness isn’t an issue relating to the ears — doctors believe misophonia is part psychological and part physical. Theories suggest it could stem from how sound affects the brain and triggers automatic responses in the body; however, there is debate over its cause. The generally-accepted idea is it is a neurological disorder and a Pavlovian conditioned reflex, or an expression of a predictable or conditioned reaction. Thomas H. Dozier, a board certified behavior analyst and director of the Misophonia Treatment Institute said misophonia is a subset of sensory processing disorder, a term that refers to the way the nervous system receives messages from the senses and turns them into appropriate motor and behavior responses.

Misophonia is sometimes mistaken for anxiety, bipolar or obsessive-compulsive disorder. An argument in 2013 pioneered by doctors Arjan Schröder, Nienke Vulink and Damiaan Denys stated misophonia should be classified as a separate, new disorder, as it is not currently recognized in either the Diagnostic and Statistical Manual of Mental Disorders, Fifth Edition, nor in the International Statistical Classification of Diseases and Related Health Problems. The former is the universal authority for psychiatric diagnosis, whereas the latter is a medical classification list by the World Health Organization. They argued diagnostic criteria could help to officially recognize the patients and the disorder, improve its identification by professional health carers and encourage scientific research.

Primary care physician Barron H. Lerner, who has misophonia and is a New York Times blogger, wrote in a piece for the Times’ Well blog, “Please Stop Making The Noise,” in which he shared his take on the often-asked question of whether misophonia really even exists.

Those with misophonia are “much more sensitive than [their] roommates to noises from adjacent apartments,” Lerner wrote in his blog. “[They] fixate on the noise and cannot fall asleep.”

Lerner also described one of his patients whose sleep is interrupted nightly.

“He can rarely fall asleep again, because of his anger,” Lerner wrote.

The reactions someone with misophonia suffers from come from the fight or flight reflex, Lerner also wrote.

Melanie Herzfeld is an audiologist at the Hearing and Tinnitus Center. As an audiologist, she is a practitioner who treats those with hearing loss and proactively prevents related damage. Herzfeld said the reality for those with misophonia creates friction between them and those nearby.

“Imagine eating with friends, only you can’t stand their chewing, swallowing … or being in the theatre and hearing crunching popcorn and wanting to kill the person crunching … or sleeping with a partner and being unable to tolerate their breathing; heaven help you if they snore or cough,” Herzfeld said. “I’d say it would have an impact.”

On top of that, there is no known cure for misophonia. Instead, those who suffer from the disorder can find treatments or consult their nearest audiologist for help. Many patients use cognitive behavioral therapy, in which they learn how to distract themselves or substitute white noise or other sounds to avoid becoming angry at others.

There is also tinnitus retraining therapy, which uses a combination of sound therapy and demystification mechanisms, with directions about how to return to normal life without provoking symptoms. It is based on the work of the Jastreboffs and is primarily aimed at those with tinnitus and hyperacusis, disorders of abnormal sound sensitivity, but has also claimed success with people suffering from misophonia, according to Misophonia UK.

Another form of therapy is habituation, the use of broadband sound generators combined with supportive family and patient follow-up. The therapy involves lessening the amount of auditory contrast between a quiet background noise and the offending trigger sounds.

Dr. Marsha Johnson, clinical director of the Oregon Tinnitus & Hyperacusis Treatment Center, said as many as three-fourths of her patients have shown significant improvement during therapy. The severity of misophonia reactions may lessen; however, the use of the devices do not appear to result in long-term recovery, she said.

There are less clinical methods of coping as well. Many people mimic what they hear or see, a coping mechanism that makes the sufferer feel better. Some people also utilize hypnosis or color theory, such as white noise or pink noise.

According to Schröder’s study, lifestyle also plays a role in handling reactions. Exercise, sleep and stress management may help lessen the reactions from the trigger. Another suggested lifestyle change is wearing ear plugs or headsets to tune out sounds. Additionally, The Misophonia Association has chapters across the country that holds annual conventions to bring together doctors and patients. There are many discussion forums online of those with misophonia coming together, commenting their surprise when they learn they are not alone.

As with any illness, misophonia can present severe complications for the sufferer. Herzfeld said even a trip to the doctor to be treated for misophonia can be a struggle.

“Sitting in the waiting room and listening to key strokes on the computer, hacking coughs, people talking low, clicking pens, breathing sounds and chewing gum,” she said, “… a misophonic nightmare.”

Yane Ahn is a freshman journalism major who wants you to stop chewing so loudly. You can email her at yan1@ithaca.edu.