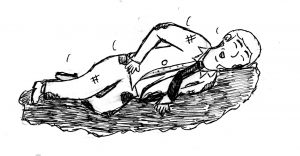 A new study has been released, stating men are irrevocably, incorrigibly pigs. Ida Knoen, a professor and researcher at the Cornell School of Agriculture, led the experiment with a radical thesis comparing the genetic and physical structures of cisgender human men and pigs.

“The results were statistically astounding,” Knoen said. “Recent experiments within swines yielded a peculiar strand of DNA. Further experimentation led me to believe that their DNA had similar properties to the DNA found in human males.”

According to Knoen, the shared strand of DNA is linked to specific physical attributes as well as behavioral patterns.

“During behavioral analysis, we discovered that human males and pigs both share habits of laziness and sty-like behavior,” she said. “The curvature of the human male nose is similar in structure to that of a pig’s snout. Pigs traditionally use their snouts to sniff for truffle mushrooms. Our equivalent would be men sifting face-first through couch cushions to find the television remote or dropped cheese doodles.”

Debbi Macalister, owner of Pigs for Promise in Boulder, Colorado, was not surprised about this discovery. “When pigs are overheated, they roll in mud to cool down. Have you ever paid attention to men? As soon as they think they’re hot shit, they roll in the mud until you can’t stand ‘em anymore. At least the pigs appreciate you when you feed them.”

Knoen’s research has gone public and has been met with some skepticism within the scientific community, most notably from men.
“She’s a hack who probably slept her way through grad school,” said one Pulitzer-winning male scientist. Following his comment, the scientist proceeded to oink and eat from a trough of pig feed.

Current scientific study has not determined how men are able to maintain the diets of pigs. “Reports of excessive food consumption have always been associated with human males,” Knoen said. “We believe the shared swine DNA strands may affect the performance of stomach enzymes and internal organs.”

Public groups have vocalized outrage against this new study and its appearance in the media. One such group, HuMen, formerly known as the Humanoid Meninists, protested Knoen’s appearances at conferences across the country.

HuMen spokesman Phil Napoleon led the most recent protest at the Fem-STEM conference in February.

“Men are not pigs. Feminist propaganda has always been out to devalue our experiences. Now they’ve invaded one of our most hallowed spaces, the STEM field, in order to spit out lies that denounce our humanist truths of self-experience,” said Napoleon.
Knoen was not alarmed by the presence of protesters at her event. “Men have always been pigs. Wives have reported hearing oinking coming from their sleeping husbands since The Feminine Mystique. Bell Hooks and Audre Lorde have discussed misogyny and how it’s as invasive as the smell of pig feces. Now, we finally have concrete evidence for why every encounter with men makes us feel like taking a long shower and frying up a pan of misandrist bacon.”

Knoen is currently in talks to turn her research into a motivational speaking series and a feature documentary. HuMen protesters were asked about this, but they were too busy rolling in mud to comment.

John Jacobson is a sophomore integrated marketing communications major who has discovered a new meaning to Animal Farm. You can email them at jjacobs@ithaca.edu.