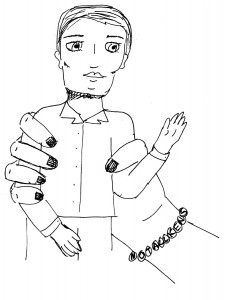 Believing that young girls are in desperate need of a more well-rounded education on what it means to be a woman in today’s society, 33-year-old self-professed “Windex lover,” Chelsea Miller recently advocated the creation of a new youth organization, “Future Housewives Against Feminism,” at the Round Rock Community Center outside of Austin, Texas.

“The girls really need to know that they can grow up and become housewives if they want to,” Miller said. “There are men all over the world who need us to clean their bathroom mirrors and bring their suits to the dry cleaner. I don’t want these girls to make the mistake of getting pulled in by the feminists and becoming men-haters.”

Miller gestured to a group of young girls nearby, participating in an exercise with Barbies. “They have to make Barbie say nice things to Ken and fold his laundry,” she explained. “Remember girls, not all Kens! You’re going to want to re-fold that pair of pants, Christine.”

Miller, who was born and raised in Round Rock, says growing up with a father and brother she loves has given her quite a different perspective on feminism than other women. “I know some women don’t have great relationships with the men in their lives – maybe they were slighted by an ex-boyfriend, or overshadowed by an older brother or something like that,” Miller explained. “And then maybe feminism is something they think they need in order to cope with their own problems.”

However, Miller said the idea of feminism just doesn’t apply to her. “I like washing my husband’s clothes, and I genuinely enjoy wiping down the toilet seat after him,” Miller explained. “I love being a housewife, and feminists want to take that away from me. They want us all to go to medical school and law school and leave our husbands to fend for themselves.” The idea of making her husband do the dishes and Swiffer the kitchen floor, Miller confessed, is unbearable.

Aubrey Carver, a seven year-old elementary school student and member of Future Housewives Against Feminism, is greatly enjoying her time in the organization. “Mrs. Miller feeds us snacks and lets us play with toys,” Carver explained. When asked about her own views on feminism, Carver had plenty to say: “I love my dad and my brother, so I am not a feminist.” Miller smiled at the young member in approval. “Not all men!” Carver yelled, before running over to Miller to accept a chocolate chip cookie.

“We’re going to make a real difference here,” Miller beamed. “We meet every Tuesday, and we’ve already got a lot on our plate. Just next week, we’re holding a cleaning supply drive. We’re going to be giving away dustpans and vacuums to housewives in need,” she explained.

Miller says the main goal of her work with Future Housewives Against Feminism is to inspire the young girls not to feel pressured or oppressed by the agenda feminists are pushing. “I want these girls to know that it’s okay to love and take care of the men in their lives, despite what the feminists say,” she explained. “I want them to grow up knowing that it’s okay to enjoy watching The Bachelor, and it’s okay to think that Robin Thicke is a lyrical genius for creating ‘Blurred Lines.’ I mean seriously, that song is amazing.”

Miller said she hopes to see Future Housewives Against Feminism spread to schools all over the country. “We need to stand up to the world and show that not all women are feminists. Some of us love men, and just want to cook them steak dinners.” The group’s meeting concluded with a pledge of allegiance to Kaley Cuoco-Sweeting, who Miller referred to as “a true genius and inspiration.”

Kathryn Paquet is a senior television-radio major who firmly believes in other people policing her body. You can email her at kpaquet1@ithaca.edu.