Home IssuesBorders RAW FROM THE SAW: Under the Skin
BordersIssuesMagazineMinistry of Cool

RAW FROM THE SAW: Under the Skin 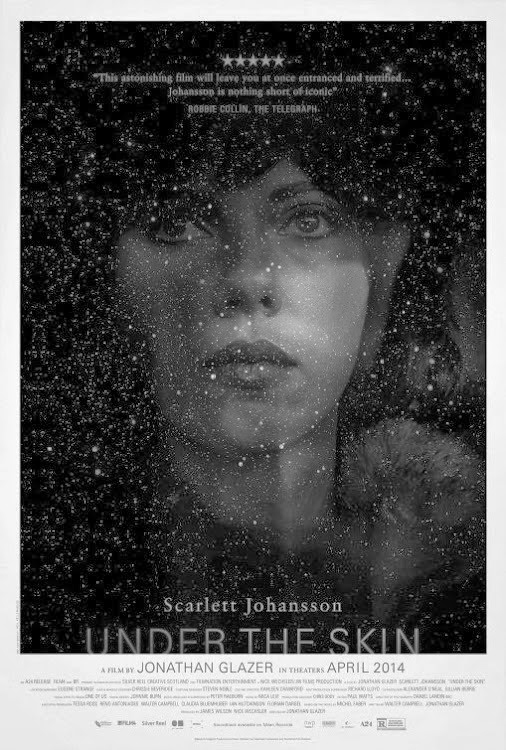 It’s said that it would take somewhere around nine months to travel to Mars on a modern space shuttle. The red planet is a place that humankind has tried to imagine and understand for centuries, and still today we ruminate on the possibilities hidden in that world. What might we find there? Will we be able to understand it?

In his latest film, Jonathan Glazer has discovered something equally beguiling, equally fascinating.We cannot anticipate the images within, and it’s unlikely we’ll understand at first glance. “Under the Skin” is a new world, a dark corner of cinema unexplored until now, and it took Glazer a decade of development to get there.

To watch the film is to learn a radical new language in fiction film culture. Glazer is fluent, and with it he spins a tale in which someone as ubiquitous as Scarlett Johansson is made entirely alien, and a locale as familiar as Scotland is made frighteningly otherworldly.

As far as general plot goes in “Under the Skin,” Johansson plays an extraterrestrial in human disguise, stalking the streets of Glasgow with a discreet white van in search of young men to lure into the passenger seat. It seems like simple seduction, but after someone is successfully ensnared, what follows defies any kind of classical understanding: The images are so unique and unknown that the audience is left to infer their content and meaning.

Fortunately, the images are so intensely, so successfully hypnotic. One can’t help but look on in awe and wonder at the CG creations of Glazer’s VFX company, One of Us. Whereas lately the science fiction genre has been building notoriety for the use of gaudy, overwhelming animation tactics, these images are gallery-worthy imaginations painted with subtle strokes.

The true stroke of genius, though, is the manner in which these abstract sequences are paired against scenes of startling reality. To introduce an unusual documentary edge to the story, Glazer and his crew outfitted the alien’s van with hidden cameras that they built specifically for the film. Johansson, nearly unrecognizable in a black wig, would drive the van around Scotland and call young men to the window, people who were entirely unaware that they were on-camera. As a result, there’s a thick element of randomness and voyeurism that ramps up the intensity of these otherwise ordinary, human scenes tenfold.

It seems as if each narrative beat of “Under the Skin” is engineered to subvert any generic expectations, or, moreover, artistic expectations in general. The plot is dense with a surprising diversity of scenes, each one masterfully executed with creative aplomb. To look back on the film after the fact is to realize the breadth of the experience: “Under the Skin” is a true exploratory voyage, led by a cinematic pioneer and an actor at the top of her form.

Like space travel, it is not an expedition for the faint of heart: the level of shock and ambiguity put forward has taken some audiences aback. Those searching for fresh artistic ground and new experiences, however, will find a feast of intrigue that sticks to one’s ribs long after the fact. There is nothing else like it in the history of cinema, and it is very unlikely that a similar experience will come along in our lifetime. I have a feeling that audiences will journey back many times: there are treasures to be found for years to come.

Raw from the Saw: Emily the Criminal Review

Ranking Which Marvel Characters are Most Likely to...