written by Amanda Hutchinson May 1, 2014 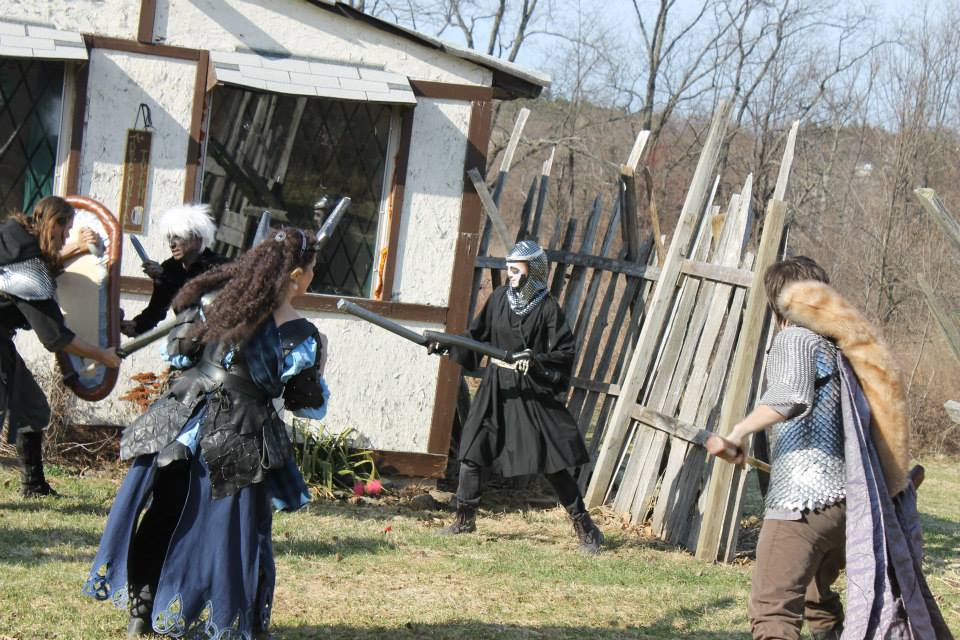 It was a sunny Saturday afternoon, that weekend in April every year when Ithaca finally remembers it’s spring and everyone is outside. As I walk into town, however, there’s no one to be found, and the only indication that anyone has been nearby recently is a notebook left on the front steps of one of the buildings. Like any good college student, I sit down and read it while finishing my sandwich, taking a swig of water and regretting my lack of sunscreen.

Then I see them approaching. Humans, elves and even feral humanoids return to town after their latest quest. Sensing my confusion, they point me in the direction of their leaders. Within the hour, I’m in town again fighting against the residents, and by nightfall I’m fighting beside them against an invading army. It’s all in a day’s work for Finger Lakes Adventure Gaming.

FLAG is one of many organizations around the world that does live-action role-play, or LARPing. While there are many varieties, the basic premise behind it is to take the experience of a tabletop role playing game like Dungeons and Dragons and bring it into the physical world so players can act out their characters’ experiences. John Eddy, one of the founders of FLAG, explained that, for him, LARPing was a good way to combine the fantasy genre he had enjoyed with social interaction and time outdoors.

“It is a way to feel dramatic and heroic in a way that is not often possible in real life, and to share those feelings with others of common interest,” he said.

A typical FLAG weekend, which happens once a month between April and October, runs from 10 a.m. Saturday morning until 4 or 5 p.m. Sunday evening, and it will have nine to 12 sessions, called modules or encounters depending on the length. I couldn’t stay all weekend due to work, but I got to participate in three modules, one of which went well after sundown. While modules aren’t necessarily all related, canon is maintained over time, and even some non-player characters (NPCs), which are normally just monsters rather than specific entities, come back into the storyline.

Because FLAG is a smaller LARP, everyone takes turns as NPCs, and newcomers like me are generally cast as the NPCs to serve as opponents for the paying members of the group, who have their own personalized characters. Emily Richards now runs the group with her husband Gareth, and she said the size also allows for a more personalized experience for the player characters.
“One of the things I find sets our LARP apart is that first of all we’re small but we do a lot of character-specific storylines,” she said. “And often I find the players create their own drama, create their own humor when we’re not actually giving things to them.”

Larger LARPs, especially groups that have individual chapters spread out over the country, have the difficulty of keeping everyone on the same page, something that inherently comes easily to locally-based groups like FLAG. Alliance is a Pennsylvania-based group with 16 chapters under one rule set, and Michael Ventrella, owner and self-proclaimed “fearless leader,” said it’s important to maintain individuality while keeping each chapter operating in the same world.

“That’s part of the fun of the game, of course, to be able to play your character at every separate place,” Ventrella said. “The rules are the same, but you can take your character anywhere.”

Variation also comes in the style of LARP. I participated in a fantasy boffer LARP, which is the one with foam weaponry and Tolkienesque characters that most people probably think of when they hear the term. Another popular style is the parlor LARP, a more political system where conflicts are resolved with dice and skill checks like D&D rather than by hitting other people with swords. Kim Garnett helped start a vampire parlor LARP at Cornell and participates in FLAG, and she said while she enjoys both styles, she doesn’t always favor one over the other. While boffer LARPs are physically draining, parlor LARPs have a focus on mental effort.

While dressing up in fancy clothing and hitting other people with foam swords is an obviously cathartic experience, as I found, LARPing is more than stress relief. Richards said many members utilize their out-of-game hobbies to enhance their game experience, especially music for bard characters and sewing for costumes. Eddy also found that in-game interactions and decisions can help build leadership skills in a relatively no-risk environment.

As for the stigma against it, I certainly got my fair share of weird looks when I told people what I was skipping Ithaca Today and homework to go cover. A lot of people think that LARPing, D&D, and really any type of roleplaying is nerdy or weird, and I suppose it is to some extent. Our solution to the stigma? Try it yourself. Don your best medieval clothing, armor, and face paint. Take pride in taking down an enemy soldier with a longsword. Swear when you roll a one on a really important skill check. Step out of your comfort zone and into the adventure.