An Open Letter to George Huguely 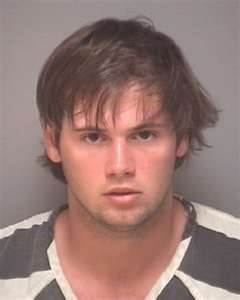 Editor’s Note: In the beginning of March the Court of Appeals of Virginia upheld George Wesley Huguely V’s conviction of the second-degree murder of his ex-girlfriend. He is currently serving a 23-year term. In September he will be in court for a $30 million wrongful death suit in Charlottesville Circuit Court.

Well George, it’s official: The Court of Appeals of Virginia has upheld your murder conviction, and you’re going to stay in jail. The state dismissed your lawyers’ most recent claim about procedural violations as utter balderdash, but we think the decision might also have something to do with the khakis, non-haircuts and vaudevillian jailhouse costumes you wore to court.
Last time we saw you, you had on khakis, a Shaq-sized blazer and an unbuttoned Oxford with no tie. We’ve never been tried for murder, George, but even if we were charged with something like speeding and underage possession like you were in 2007, we’d have put on a suit for the judge. Those long sleeves nicely covered your manacled hands, but still. You’re at a trial. Your trial. This is court, George, not country club casual at the Wintergreen Resort, where you got drunk at TEN O’CLOCK on the morning of Yeardley Love’s murder.

Where did you get such poor fashion sense? From your dad? Some connection seems evident. George IV rocked a power doughnut and an odd fleece/sportcoat combination at your trial, and he wined and dined you with some teammates on that fateful night. We also hear he’d helped line up a job at a plush D.C. real estate firm after graduation. Think he’ll be around when you get out? It’s possible, though last we heard he was facing foreclosure and three DUI-related charges, and come to think of it, he did call in that domestic abuse complaint back in 2008, when you (reportedly) threatened him aboard the family yacht, then jumped ship before the Palm Beach sheriff arrived. You two figure it out.

So our question stands: Would it have killed you to wear a suit? You must have one from your days at the sex-scandal fraught Landon School or your time at UVA. And speaking of the University, maybe they’ll reinstate you. All things considered, the Wahoolas have been pretty accommodating. Rather than expel an athlete, the school let you withdraw, then claimed not to know about your legal troubles, like your arrest sophomore season, when you got tased after (reportedly) resisting arrest and threatening to kill a policewoman.

That one rang a bell, George, so we did some digging and, sure enough, on the laptop you stole then hid from police, we found this line in a post-argument email to Yeardley: “I should have killed you.”

But back to the University of Virginia and the University of Virginia Cavaliers Men’s Lacrosse Team. See George, you were an NCAA Division I athlete, and any DI alum knows that schools monitor everything from who players date to where they party, like the bar where you choke held another female UVA student until a bouncer intervened. John Casteen III, your school’s now-retired president, said UVA was unaware of your history, and while we don’t buy that shit for a second, at least Casteen (Class of ’65) understood the kindergarten laws of public relations enough to speak to Yeardley’s murder. Your coach, Dom Starsia, who was subsequently reinstated with a million-dollar contract, never publicly spoke to students or press. He’s now facing charges leveled by Yeardley’s mom, including lying about your criminal record and tolerating numerous instances of the same sort of behavior that ultimately killed another student. He’ll wear a suit to court, probably.

Yet there was a sad predictableness to Casteen’s bullshit, since most everything you or your college or your lawyers said is a hedge or an insolent lie. It took true gall to stand before Yeardley’s family and teammates and plead not guilty to charges of first-degree murder, felony murder, robbery, burglary, grand larceny, and breaking and entering. To suggest she died of either a heart attack or pillow self-suffocation. Or that a 6’2 All-American lacrosse player who just kicked through her door was only “trying to talk” and only after a bit of mutual tussling that the conversation “spiraled out of control.” To tell police you shook her “a little bit,” that you “never hit her,” and that it was in fact she who slammed her head against the wall, and that’s how her face got so cut and swollen, and that’s how her brain hemorrhaged, and that’s how she died.

Is that really what happened, George? Tell us, because we want to know. And so would your mom and sister, I think.
And for God’s sake, put on a suit. Or don’t. We knew from your teammates’ testimony and your thoroughly documented violent history that you were an alcoholic piece of criminal shit.
But that open collar somehow confirms our other suspicion: