RAW FROM THE SAW: Banner Saga 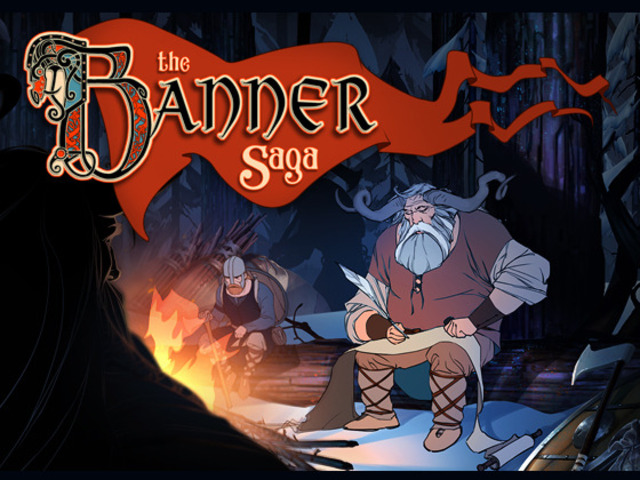 Not at all to be confused with Candy Crush Saga

The gods are dead. An old evil is swooping down from the north and consuming the world. What do you do?

Story is everything in role-playing indie video game The Banner Saga. An ancient clash is resurfacing in a Viking-inspired world as the war-bent Dredge march down into the lands of humans and Varl. Varl, created by the deceased gods, are horned giants that have kept an alliance with humans for ages. The races face a war that can only end in demise.

Aside from grand schemes, The Banner Saga focuses heavily on individual characters. A Varl named Hakon and a human named Rook serve as the viewpoints of the game, and through them players make all of their decisions. Each leads a caravan full of Varl and humans. They make decisions that affect themselves, other major characters close to them and the fate of the entire caravan. Events pop up as the caravans travel between towns and cities, sometimes fights break out, sometimes you happen upon strangers. The leaders also manage supplies and when the caravan gets to rest, which improves morale. Players have to decide exactly what they do, and these different decisions have lasting effects on individual characters’ storylines

All of these events and dialogues also allow for a deep connection to build between the player and the other characters within the game. When a character dies or leaves the narrative, it is usually a severe loss. Varl are only created by the now-dead gods, so each death leads them closer to extinction. Because the storylines are dynamic, players might be left wondering how things might be different with the selection of a different path or means of action. Ultimately, you decide what happens to you and your people.

Dispersed between the events are battles. You choose your warriors throughout the game and lead them against Dredge and other enemies in turn-based tactical fighting. The stages are one-dimensional and the general fighting system can be difficult to grasp. I had to look up what all of the stats meant and how they had an affect on everything. But once I semi-mastered the combat, most fights became a breeze on the regular difficulty setting. There is not a lot of variation in the action but it does serve as a good break from the reading and heavy decision making that makes up the rest of The Banner Saga.

Characters unlock the ability to level up after tallying up kills in combat. Moving a character up a level allows for the allocation of a few points into combat skills. To actually progress up a level, you need to spend renown. Renown is a currency gained by winning battles and completing events. It is spent on levels, supplies and items. Items can be worn by the main characters to improve certain stats or give bonuses in battle.

There is almost never any animation of the events that occur throughout the game. Most pieces are told through text boxes and unvoiced dialogue. This aspect of The Banner Saga gives it the air of a tabletop RPG, where players’ imaginations are a key component to the game. For a game in this age of the medium, that sounds like a lame excuse not to animate all of the scenes, but it lends itself well to the novel-like experience. Some decisions are incredibly difficult with unknowable outcomes, and being able to sit and reread the words over and over before deciding is very relieving.

The Banner Saga has a specific charm to it, expertly imagined through its phenomenal 2D spectroscopic artwork and amazing soundtrack. The scenes are beautifully rendered, and watching the rolling hills, mountains, fields and other landscapes move by when traveling lends itself to a peaceful respite. The soundtrack is heavily inspired by Scandinavian themes and fits every scene perfectly, ramping up the intensity, the wonder and the soul-crushing sadness.

This is Stoic’s first foray into the video game market, and they plan on making this series into a trilogy. The game was funded through Kickstarter and headed by three people: a designer, an artist and a programmer. For such a small staff, this independent game feels like stepping into a professional and fully-realized world.

The team – Alex Thomas, Arnie Jorgensen and John Watson – all came off the Star Wars: The Old Republic team, so they had some good experience coming in. They appear to work supremely well together and produced an outstandingly narrative-driven game.

The Banner Saga takes its twists and turns, with some wild surprises throughout the game. I am tempted to play it through for a second time to see if I can try to make all of the “right” decisions, if there is such a thing. To really appreciate the game, it should be played to completion with your attention heavily on the story. Just try not to cry at the end.