Home Issues Doin’ It For A Reason
IssuesMagazineMinistry of CoolSexweb-featured

Doin’ It For A Reason 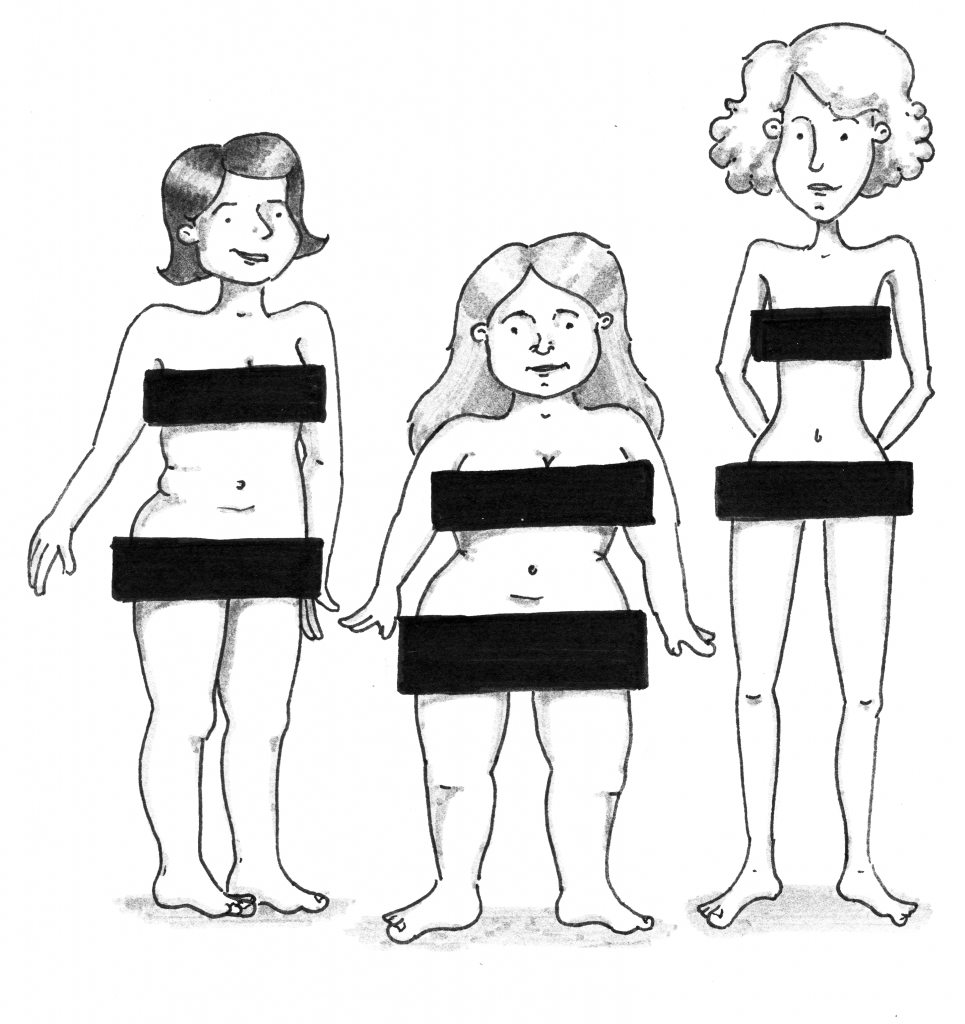 The importance of unromanticized sex on HBO’s “Girls”

You get home from a long day at work, or school, or wherever it is that you spend your days. You go to the kitchen, heat up some dinner, and plop down on the couch. You pick up the remote and turn on the TV. You begin to flip through the channels, and you come upon a rerun of “Gossip Girl” on the CW. You see Blake Lively and Penn Badgely having sex onscreen (or pretending to, at least.) They’re young, physically fit, and beautiful. There’s probably nothing about this that strikes you as odd.

But let’s say that, instead of “Gossip Girl,” you happen upon HBO’s “Girls”. You see, perhaps, Lena Dunham lying on a bed with Patrick Wilson. She takes off his pants, and he tells her, “I want you to make me come.” She stops, looks him in the eye, and replies, “I want you to make me come.” He climbs on top of her, kisses her, and lifts up her shirt. They start to have sex.

Here, you might do a double-take. After all, Dunham doesn’t have Blake Lively’s cascading blonde hair, perfectly-sized chest or slender physique. Not only that, but her character Hannah turns the tables on new lover Joshua and tells him explicitly what she wants, rather than silently complying with his requests.

There’s no denying that this is not your typical television sex scene. Ever since its premiere in April 2012, “Girls” has never been afraid to take risks, most notably in regards to portraying sex and naked bodies. Naturally, these artistic choices have not gone unnoticed.

Most recently, during the “Girls” panel at the Jan. 9 Television Critics Association winter press tour, The Wrap writer Tim Molloy fired a nasty question at Dunham, inquiring about her frequent nude appearances. “I don’t get the purpose of all the nudity on the show – by you in particular,” Molloy said to Dunham.

Comparing it to fellow HBO hit “Game of Thrones,” he continued, “… I get why they do it. They do it to be salacious and titillate people. And your character is often nude at random times for no reason.” Dunham responded to him directly. “It’s because it’s a realistic expression of what it’s like to be alive, I think, and I totally get it,” Dunham responded.
While Molloy’s statement may not have been worded in the kindest or most respectful manner, it does bring up an interesting question: when does nudity have artistic value and, conversely, when is it gratuitous? Kathleen McClintock, professional art model in Minneapolis, Minn., offered some insight. Art modeling, she believes, is a prime example of nudity that is not gratuitous in its nature.

According to McClintock, students in figure drawing classes with a live model are more concerned with the artistic elements of the display than relishing the fact that a naked woman is standing before them. “You are thinking about occupying space, and composition, all the many things that a student has to think about,” McClintock said.

When comparing this type of nudity to instances of nudity in the media, McClintock sees a pretty clear distinction. “There is a difference in that, in fine art, figure drawing is the basis for any other kind of art you will draw,” she said. “And obviously in the media, the body is not shown much respect a lot of the time.”

Of course, whether the nudity in “Girls” is gratuitous is entirely subjective and will vary from one opinion to the next. But regardless of artistic value, another important element to consider is Dunham’s choice to portray her body – which doesn’t fit the conventional Hollywood standard of “beauty” – on the show. Why, exactly, do many react to Dunham’s nudity as if it were a sort of personal affront to them?

According to Renee Engeln, senior lecturer in the Northwestern University psychology department, the inclination to react this way is a learned behavior. “We’ve gotten used to a standard that, for the most part, doesn’t even exist,” Engeln said. “And realizing it’s become such a norm for us that we would react to its violation in such a way – that suggests we’ve completely lost touch with what actual women look like.”

There’s no denying that the women we see in the media don’t typically represent the average woman – most don’t wear a size zero or have perfectly flat stomachs. But these are the images we receive every time we pick up a magazine, glance at a billboard, or turn on the TV. And because this tends to be the most represented type of appearance, at least based on the media we consume, we accept it as the norm.

Thus, when someone like Lena Dunham intentionally breaks this norm, he or she immediately stands out, and not in a good way. “The truth is, we like to look at beauty – we like to look at perfection,” Engeln said. “It does good things for our brain too – it pleases us. But it also has all of these unwanted consequences that come along with that.”

So naturally, turning on the TV and seeing a naked body like Dunham’s – one that is atypical of the usual Hollywood standard – could easily come as a surprise to any unsuspecting viewer, and even cause them to lash out at her, and the show, for it. Of course, going hand in hand with nudity is another very important component of “Girls”: the portrayal of sex on the show.

For the most part, sex on television does seem to follow a certain format. Rebecca Plante, associate professor in the Ithaca College sociology department, shed some light on this idea. “It is most typically portrayed in a fairly scripted and predictable fashion,” Plante said. “It is usually portrayed so that we see some passion, and the inference that we’re supposed to make is, ‘Oh, it’s passion that’s going to enable these people to end up in bed.’”

Of course, in reality, this is certainly not always the case. People engage in sexual activities for a whole array of reasons, and they aren’t always fueled by the gripping passion that we see so often on television. But this is the kind of sex we are shown when we watch TV, and it could very well fool us into thinking that it really is the norm. “The other piece of this is the piece where we’re not shown the failures, or even the part where it gets awkward, so we lose the sense of the context for people deciding to share their sexualities with each other,” Plante said.

So how much of an impact can the portrayal of sex on television really have on viewers? According to Plante, though we may not be able to say that it is the sole cause of a person’s thoughts or perceptions of sex, it does seem to have an influence. “I think we have seen in studies people talking about the ways that it influences the picture they have, the movie that they run in their head about what sex should be like or will be like, and why we should have it,” Plante said.

“Girls” is certainly unique in its portrayal of sex. While it does sometimes show us steamy and passionate sex, it strikes a balance, also venturing into realms normally untouched by the media. Unlike most TV shows, “Girls” also shows us the awkwardness that can come with sexual encounters, and portrays characters who openly discuss what they want from their sexual experiences. A prime example of this can be found in episode nine of the second season, “On All Fours.”

It opens with Adam and his new girlfriend, Natalia, getting back from a night out. Before they have sex for the first time, Natalia tells him exactly what she wants – that she is taking contraceptives but wants him to ejaculate outside of her, that she doesn’t like to be on top, and that she doesn’t like “soft touching” because it takes her out of the moment.
This scene is just one of the many examples of “Girls” entering territory that is normally uncharted by television sex scenes. Instead of only showing us the hot, passionate sex that is typically prefaced only with fervent, romantic kissing, “Girls” also shows the aspects that often accompany sexual experiences in real life – talk of contraceptives, awkward chatter, and conflicting desires and needs, among other things. So how could this type of portrayal affect viewers?

According to Plante, it could help people understand sex better within the context of their own lives. “[It’s] not telling them how to live, not giving them a blueprint, but giving them food for thought, like, ‘Oh, here’s another way for me to think about something that isn’t easily, openly, commonly, well-discussed in our culture,” she said.

But even while this initiative may send a positive message to viewers, Engeln doubts it will catch on in the television industry. “I think we talk like that all the time, like we say, ‘Oh, these magazines are showing real women now,’ but the only reason it garners any attention when they do that is because it’s still so unusual,” she said. “It does have potential, but I think we’re a long way from reaching that potential.”

Plante also doubts that Dunham’s ideals will catch on in the industry. “I think there’s still enough taboo and puritanism, and not enough other cultural social space in which we’re really just neutrally and in an adult manner speaking about sex,” she said.

But what would it mean if, someday in the future, the ideals that Dunham presents really do catch on? “For female viewers, it could maybe teach them to be less critical of their own bodies, to help them feel more confident,” Engeln said. Plante thinks it could have a positive effect, too.

“Hopefully, people would feel less ashamed of what they do, and how they feel about what they do,” Plante said. “And maybe people would be able to talk more generally about sex, you know, as if it’s a part of life the way that eating or brushing your teeth or taking a shower are.”

Essentially, it’s likely that we are a long way from seeing any real changes in the way sex and nudity are portrayed on television. Even when it seems like progress is being made, there are always setbacks – Molloy’s comments to Dunham are a prime example. But it’s hard to predict what the future will hold, and it’s not totally implausible to think that others in the TV industry could one day follow suit.

Even if it doesn’t cause an immediate wave of change, the work Dunham has done on “Girls” is important. Even now, in its third season, the show constantly challenges the messages television has traditionally taught us about sex and our bodies. With its more realistic portrayals of sex and nudity, it shows us that there are many different ways to look and be sexual, and that none is more right or wrong than the other.