Home Issues Dipping Into The Digital Dating Pool: Does technology change how we approach relationships?
IssuesMagazineMinistry of CoolSexWeb Exclusive

Dipping Into The Digital Dating Pool: Does technology change how we approach relationships? 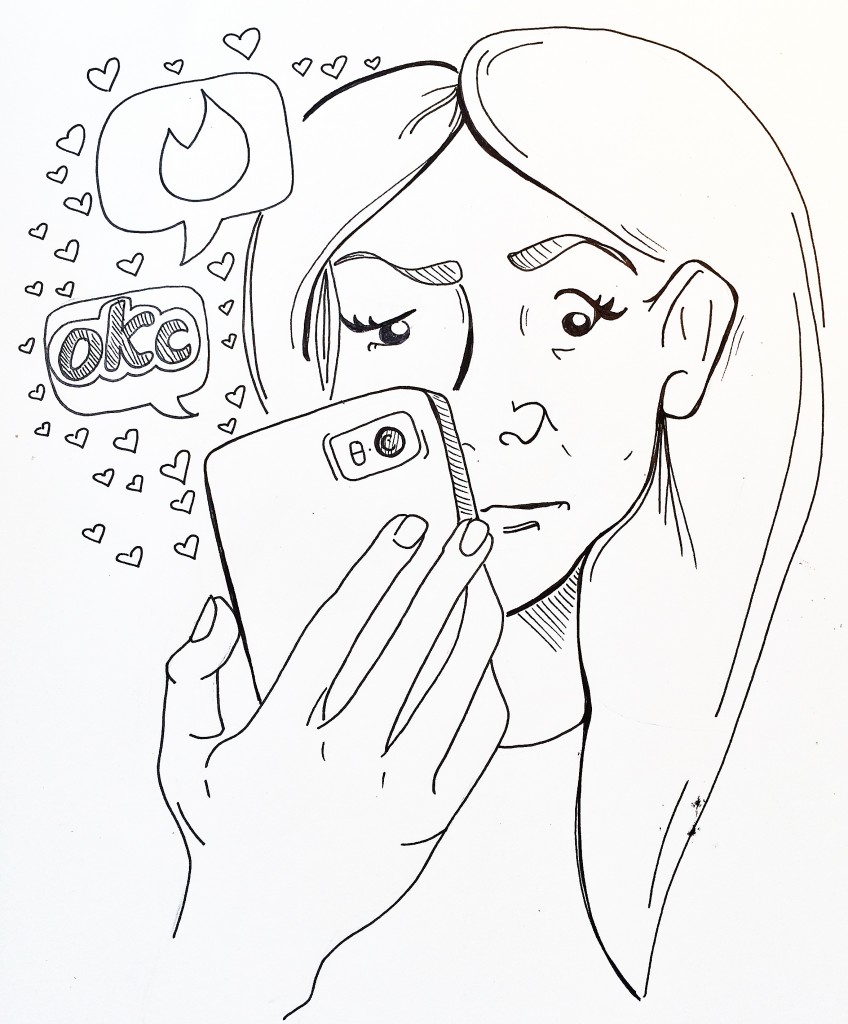 Stigma is splashy, but the water’s fine

OkCupid, Tinder, Grindr, JDate: the list goes on for the different ways someone can score a date with a few clicks of a button. Lately, it seems that technology is doing more of the matchmaking than actual people. The popularity of dating apps and websites has skyrocketed within the past couple of years, making the traditional methods of dating seem outdated. It’s more common to meet up with someone you met online than to strike up a flirty conversation at a coffee shop with a cute stranger. As a result, more and more serious relationships seem to be sprouting from this unconventional method, supporting the claim that online dating may actually be the newest tool to obtain monogamy. Yet despite the millions of success stories that come out of it, there is still a social stigma connected to using technology as a means of finding a partner.

Apps such as Tinder and Grindr are known for their easy access to casual sex. Users of these apps have the option to swipe through a series of pictures pulled from Facebook, rating friends of friends based on attractiveness. People are matched if they both like what they see, but they also have the option to “keep playing” if they want to browse through more options.

With all this availability, the temptation to dabble in multiple partners seems to draw a lot of people into a world that’s far from monogamy. In a Huffington Post article, blogger Rachel Ryan stated that online dating is only promoting the hook up culture that has manifested within the 21st century. In her own experience of using Tinder, the app did not last more than a day on her phone due to “a disconcerting number of 19-year-olds, guy friends from college and a bunch of sketchy-looking dudes from ‘the DC area’.”

A recent study from the Proceedings of the National Academy of Sciences (PNAS) found that online dating is accountable for more than a third of U.S. marriages. More than 19,000 people who were married between 2005 and 2012 were surveyed nationwide, resulting in the shocking discovery. John Cacioppo, leader of the study and professor of psychology at the University of Chicago found “evidence for a dramatic shift since the advent of the Internet in how people are meeting their spouse.” The study also found that these marriages had slightly happier outcomes than those who did not meet online, mainly due to the fact that the Internet “may be altering the dynamics and outcome of marriage itself.”

Sure, it can be easy to find a one-time fling with the technology we have today, but at the same time it can act as a stepping-stone toward an entirely new pool of potential suitors. Dating apps not only provide an endless list of choices, but they also provide a more straightforward approach. Online dating gives people the option of stating what it is specifically that they want out of a partner. Most apps and sites provide an “About Me” section in the profile that allows users to say if they want a purely sexual relationship or a serious one. Users are given the opportunity to weed out those who are only interested in a one-night stand, allowing those who want something more serious to be upfront about what it is that they are looking for.

Relationship expert, matchmaker and author Charles Johnson agreed that dating online doesn’t necessarily mean you have to settle for less.

Matchmaking websites, such as OkCupid and Match.com, use an extensive series of algorithms in order to pair people with others who have similar interests. Users are asked questions based not only on their likes and dislikes but also what they want to get out of their desired relationship. The risk factor is lowered because the site establishes what you have in common with a match, so the potential for a successful relationship is higher than picking people up at a bar. Essentially, these websites provide a shortcut for those who want to get right to the point.

The downside, however, does not lie within the apps or websites themselves.

“This generation is completely tech-savvy,” Johnson said. “Everything is at the tip of their fingertips; we are…completely reliant on technology… The more you rely on technology and become dependent of technology, the less your skills are gonna be home for that social interaction that you need in order to impress somebody.”

With today’s fast-paced “we want it now” mindset, it can be easy to become dependent on smartphones and laptops to do all of our work for us. This, in turn, can cause people to become lazy and actually lose a valuable set of social skills. Why put yourself out there and learn to talk to people when you can talk to someone online?

April Nuovo, freshman at the University of Hartford, said that her enthusiasm for Tinder has slowly diminished because of this reason.

“Instead of going out to find a real guy in real life you can shop around for one on the Internet,” she said. “You can chose what race you prefer, and age range, and fill out questions to find compatible people all without having to leave your couch. I think it seriously messes up people’s ability to be social in person.”

Yet, according to Nuovo, it seems that this particular form of thinking is what is keeping these apps so popular. “With the fast paced society we live in where technology is making its appearances in every aspect of our lives, I feel like this will only become more and more popular,” she said. “If people use technology to trace their ancestry back hundreds of years while simultaneously illegally streaming the third season of American Horror Story online, I’m pretty sure they could also use it to find a date.”

Such a dependency on technology itself is not a surprise, however, since everyday someone invents yet another machine to do a person’s job for them. Online dating, in turn, should not necessarily be labeled a bad thing. In an interview in The Atlantic, Alex Mehr, co-founder of the dating site Zoosk, explained that he believed the negative perceptions of these sites aren’t fairly justified.